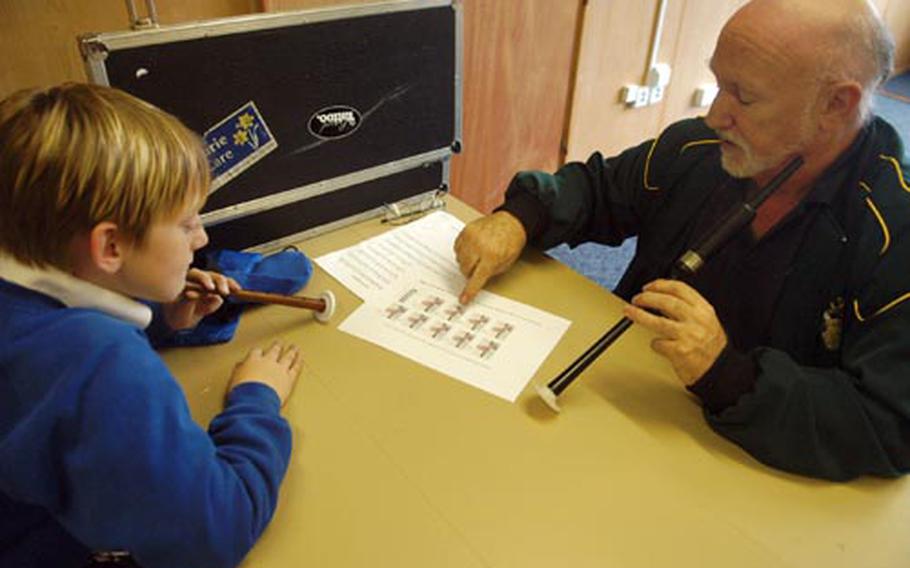 Max Lloyd and his first pupil, 12-year-old Julian Blankenship, practice notes on the chanter. Would-be bagpipers should master this part of the instrument before practicing with the bag attached, said Lloyd, who’s been playing the pipes for more than 20 years and is offering free lessons at RAF Mildenhall. Julian said he was reluctant to take up bagpiping when he started lessons a month ago. But now, he said, he loves it. “I’m angry at myself for being so stubborn in the first place.” (Charlie Reed / S&S)

Max Llloyd loves bagpiping so much he&#8217;s willing to teach anyone to play. For free. Lloyd, a British electrician at RAF Lakenheath who has been playing for more than 20 years, is recruiting students with hopes of forming a band.

You&#8217;re already a member of the Glenmoriston Pipe Band. Why do you want to start another? I thought of starting this band, because there are a lot of Americans who play the pipes and I wanted to start a band on base for the American forces and their families. I&#8217;ve found that Americans are better showmen than the Brits, too. They&#8217;re not frightened to experiment and try sentimental tunes.

What is it about the bagpipes you love so much? It all started with the Dagenham Girl Pipers, a very large piping band that was popular in the late 1950s. I&#8217;ve always liked the sound of the pipes though. &#8230; Playing the pipes has taken me around the world. I&#8217;ve played in Basel [Switzerland], Edinburgh [Scotland], Germany, throughout the States &#8212; places I would&#8217;ve never gone if I didn&#8217;t play. Next year, my band [Glenmoriston] is playing for the queen at Windsor Great Park.

The feeling you get when you march into a stadium or the castle grounds and people cheer is amazing. There&#8217;s nothing like it in the world. The hair on the back of your neck stands up. Sometimes the crowds&#8217; roars are so loud that it&#8217;s hard to hear the music. The excitement is beyond belief. The music, the travel and the camaraderie is just unbelievable. Like I said, there&#8217;s nothing like it.

Is it difficult to play the bagpipes? No. It&#8217;s the easiest woodwind instrument by far. A lot of people think it&#8217;s difficult but it&#8217;s not. &#8230; It&#8217;s tricky to train the right fingers for the right notes. The most difficult thing people experience though is keeping air in the bag. The bag loses pressure as soon as you hit a note. But as you continue playing your lungs develop, and it gets easier. ... I&#8217;ve also developed a simple method for reading music based on flash cards for players like myself who don&#8217;t know how to read music when they take up the pipes.

To sign up for lessons with Max Lloyd or for more information, call the Bob Hope Center at 01638 54 2152 or e-mail Lloyd at blowsteady@aol.com . (No, this e-mail address is not a joke!)