Getting Personal: Alconbury Elementary School student is a winner for knowing the globe 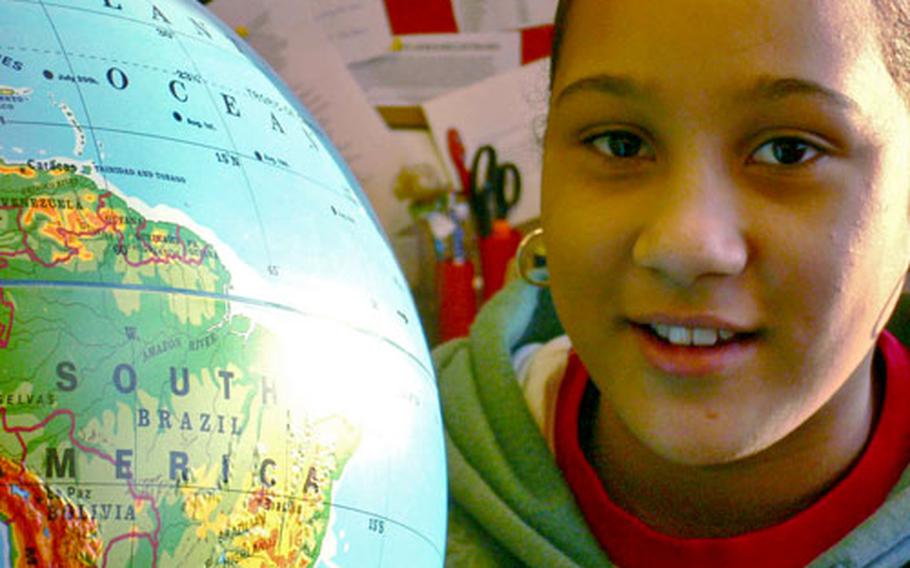 Geography Bee winner Alyssa Harvey, 11, would prefer to spend a month in the Caribbean — or the North Pole. (Ben Murray / S&S)

Alyssa Harvey knows where things are. Mountains, countries, various bodies of water &#8212; the 11-year-old from the RAF Alconbury Elementary School can tell you about them and a litany of other geographical and topographic points of interest. Days after winning the school&#8217;s recent Geography Bee on Dec. 12, the sixth-grader talked about her skills.

What&#8217;s the secret to learning about geography?

Well, you have to, like, study a lot. I studied a book with all the states in it, and it had all the highest landforms and everything.

What is the highest landform in the U.S.?

Pop quiz: What country are we in now?

The longest river in the world?

If you could go anywhere in the world for a month, where would you go?

I would probably go to the Caribbean, because the water&#8217;s really clear and the beach is there.

I would like to go to the North Pole.

Because of the snow, and it would be fun to ride a sleigh and everything.

What&#8217;s the best way for me to learn about geography? Get some maps or a globe?

You should go on the Internet because the lady who gave us the test gave me a whole bunch of Web sites to go on.

Um, can you tell me how to get to the highway from here?

When you turn off base, you should go left.