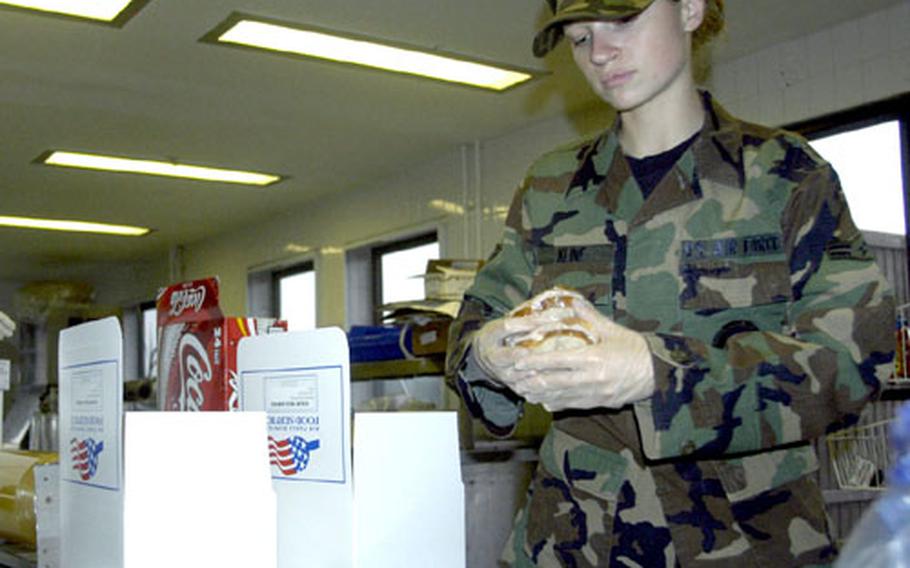 Airman 1st Class Meredith Kline&#8217;s job doesn&#8217;t allow her to leave the RAF Mildenhall Flight Kitchen, but her work is known to aircrews and passengers traveling to all points from the English base.

Kline, of Macungie, Pa., is one of a handful of services squadron personnel who make the flight meals, which are large, white &#8220;boxed lunches&#8221; packed with sandwiches, snacks and sodas that are the Air Force version of &#8220;airline food.&#8221;

Flight crews pick their own main courses &#8212; sandwiches or salad with chicken &#8212; and one of five supplements, such as salad or yogurt, along with a drink and other snacks.

Kline, 20, who has been in the Air Force two years, has worked at the flight kitchen for about 18 months.

How many boxed lunches have you made over the past year and a half?

I have no idea. Honestly.

I made about 50 today. It seemed a little busier today because they all came in at the same time. When we do exercises on base, obviously we do more &#8230; meals.

Does the Air Force have a &#8220;box lunch specialist&#8221; school or is this an on-the-job training position?

No, the box lunches are definitely an OJT thing I learned when I got here.

Where&#8217;s the farthest place one of your flight meals has traveled?

[Flight crews] aren&#8217;t supposed to tell us, but some have told me places like Romania, and some people ordered some to go to Afghanistan, but I&#8217;m not sure of that.

Have you ever made a flight meal for a celebrity or high-ranking official?

If you could create the perfect flight meal, what would be in it?

Do you add a local touch to the flight meals &#8212; say bangers and mash or spotted dick? Maybe a pint of good English beer?

Not really. It does make me a little bit sick of sandwiches. We usually don&#8217;t get many picnics out here.

We do tend to be a little creative when we run out of food. There is a little bit of creativity needed. I try to make my job fun &#8212; I&#8217;ll make the salads nicer, and the sandwiches look nicer. I do mine like they&#8217;re deli-style.

Does your name go on the flight meals?

We&#8217;re supposed to. If I have a chance I&#8217;ll put my name in it and a comment card to let them know I made it. You always want [flight crews and passengers] on your side in case you meet them somewhere down the road.