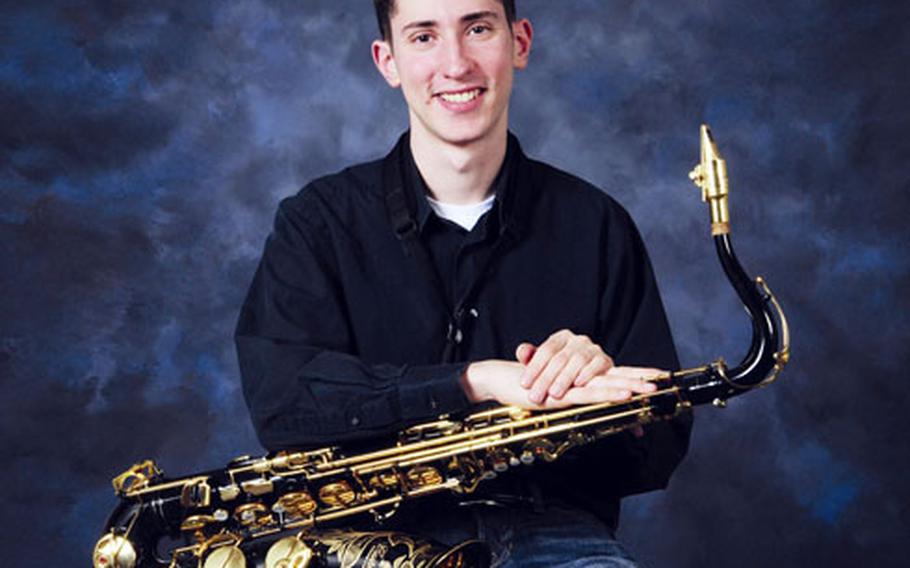 Airman 1st Class Simon Lahn of the 100th Comptroller Squadron has just been chosen to perform as the lone saxophone player for Tops in Blue on its 2009 world tour. A native of Silver Spring, Md., the 22-year-old has been stationed at RAF Mildenhall for a year of his 18-month Air Force career. (Karen Abeyasekere/Courtesy of the U.S. Air Force)

Airman 1st Class Simon Lahn can attest to that. The 22-year-old Maryland native was recently tapped to be the next saxophonist for the Tops in Blue 2009 world tour.

Lahn found out last month after trying out for the big variety show at Lackland Air Force Base, Texas. The 100th Comptroller Squadron airman will even have a homecoming of sorts when Tops in Blue plays RAF Lakenheath on July 4.

Stripes chatted with Lahn about making the cut, his influences and how his saxophone doesn&#8217;t require a spit valve.

Congratulations! When did you find out you had made it?

I found out around Jan. 23. I was definitely excited about it. It was a tough competition, but I&#8217;m excited to get on tour.

Any difficulties in the actual audition process?

There was the personal interview where the director talks to you one on one. That&#8217;s where I was most nervous.

How long have you played the sax?

About 11 years. I started out in elementary school in fourth grade on the clarinet. In fifth grade, I picked up the saxophone. I really got serious in high school, though.

Who are your primary sax influences?

There&#8217;s always John Coltrane, Charlie Parker, Wayne Shorter. I like a lot of different kinds of music, but jazz is one of my favorites.

What&#8217;s the hardest thing about playing the sax that people might not realize?

How will touring affect your stint here at Mildenhall?

How often do you have to hit the spit valve to drain all that excess saliva?

There&#8217;s no spit valve on a saxophone. On a baritone saxophone there is. But with a saxophone, you clean it out with a swab.