Getting personal: After second tour, airman a pro at forecasting Afghan conditions 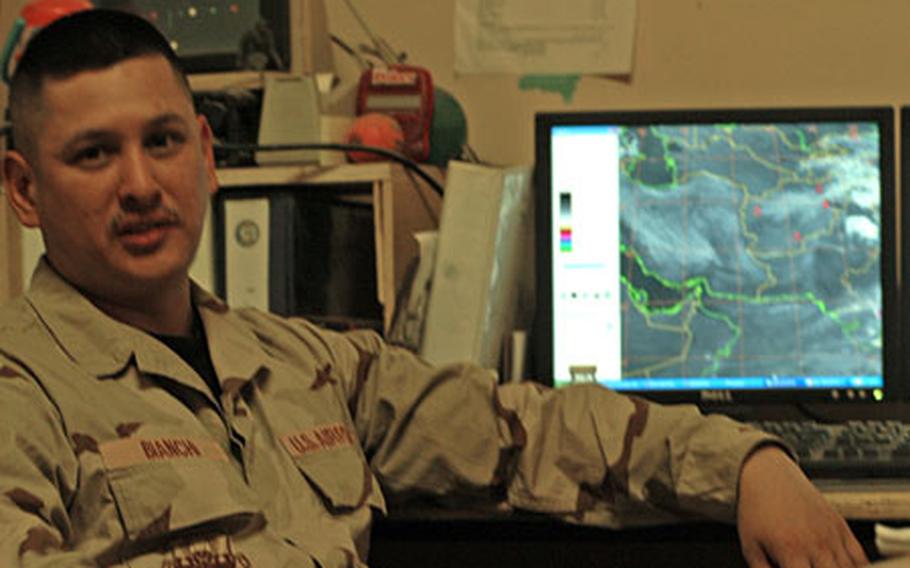 Tech. Sgt. Greg Bianchi is a Merced, Calif., native who spent the past four months in Afghanistan as a weather forecaster at Bagram Airfield. It was the second Afghan tour for the 48th Fighter Wing airman.

Stripes caught up with the 34-year-old airman in the Bagram air traffic control tower for a brief chat.

Now that you&#8217;ve almost completed your second tour of forecasting in Afghanistan, is it getting any easier? I was here in 2002 and it was a lot more difficult. It was a lot tougher back then because it was all very new. We have good records built up now to use for forecasts.

Wind seems to be the dominant weather pattern now. Why is that? We are in the 120-day summer wind pattern right now. It usually starts right after lunch and goes until about bedtime.

Much like England with the rain, fog and wind, it seems wind can be a huge factor in military decision-making here. Everyone needs to know the weather, and we provide forecasts to the Air Force, as well as all the other coalition forces. It&#8217;s our job to identify conditions and alert the leadership. But we&#8217;re really only responsible for the five-nautical-mile (5.75-mile) area around the base.

Is there a lot of pressure to get it right so missions can move forward? We don&#8217;t have a lot of access to information. There are some historical records, but they aren&#8217;t good. But we still have a good track record. I&#8217;d like to say we&#8217;re a major player.