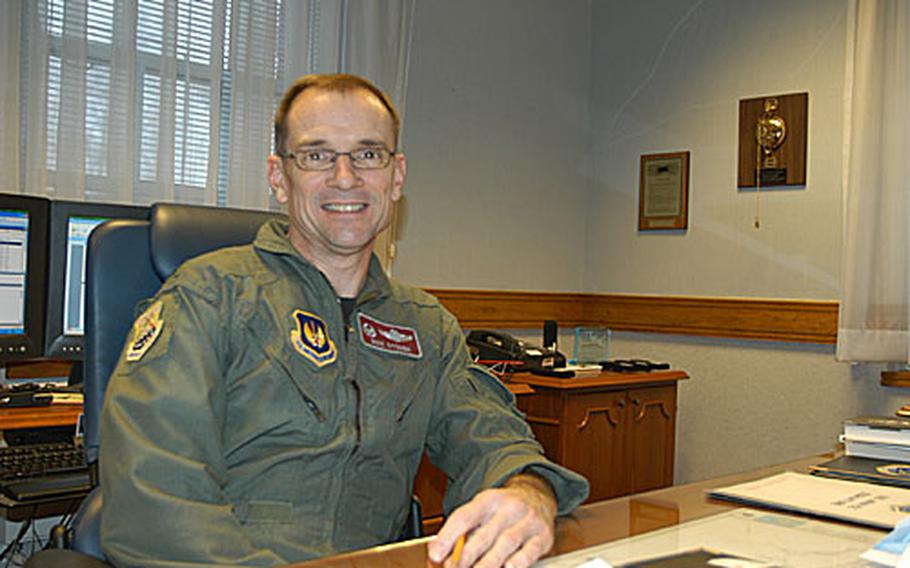 Col. Michael Stough, commander of the 100th Air Refueling Wing at RAF Mildenhall, spoke recently about the year ahead for the Air Force&#8217;s only air refueling wing in Europe. The 45-year-old Savannah, Ga., native hit on force shaping, smart operations and the future of the force.

What are the big events on the horizon for 2007?

I think about everyone&#8217;s heard of Air Force Smart Operations 21. Can you give me an example of where the Smart Ops 21 is already making an improvement?

In our shipping and receiving department. They implemented &#8220;lean principles&#8221; and they&#8217;ve slashed inventory and they&#8217;ve drastically reduced delivery time of parts from 19 to two hours. And it&#8217;s holding. They&#8217;ve leveled the flow throughout the day.

Do you have an example, offhand, in which the program was implemented with less-than-stellar results?

No, but I know there are people out there that think we are already as efficient as we can be. But if you look out there, 90 percent of what we do is waste. There are a lot of wasted steps in everything we do. That said, I&#8217;m not convinced we always focus on the right process. I&#8217;m not going to sit here and claim successes we don&#8217;t have yet.

Is there the danger as the Air Force contracts, and as you seek increased efficiency, that you can stretch it too far and end up with diminishing returns?

I want to be real careful here. Air Force Smart Operations 21 and the cuts are not related. We need to do a better job of separating the two. People are going to get cut because we need money to recapitalize our force.

They are going to cut between 10- and 30,000 airmen in the next little bit. What advice do you give both the senior master sergeant and the airman first class if they want to remain in the Air Force?

You have to tell every officer that walks in the door that you don&#8217;t have a grace period. Our attitude and philosophy used to be that you came in as a lieutenant and you have time to learn and if you&#8217;re a late bloomer that&#8217;s OK. Now, you have to walk in the door and be expected to perform.

How will the troop buildup in Iraq affect RAF Mildenhall?

The Air Force turns 60 this year. What do you see from this Air Force 60 years from now?

Sixty years from now, there will probably be more unmanned vehicles, but I&#8217;m not sure the pilot will totally disappear. There will be an increased focus on space. Let&#8217;s face it, who doesn&#8217;t have GPS (Global Positioning System) these days? (Air Force Chief of Staff) Gen. (T. Michael) Moseley stood up and said we&#8217;ll take the cyber mission. We&#8217;ll still continue to be the dominant force in air, space and cyberspace.