Getting more from an MRE 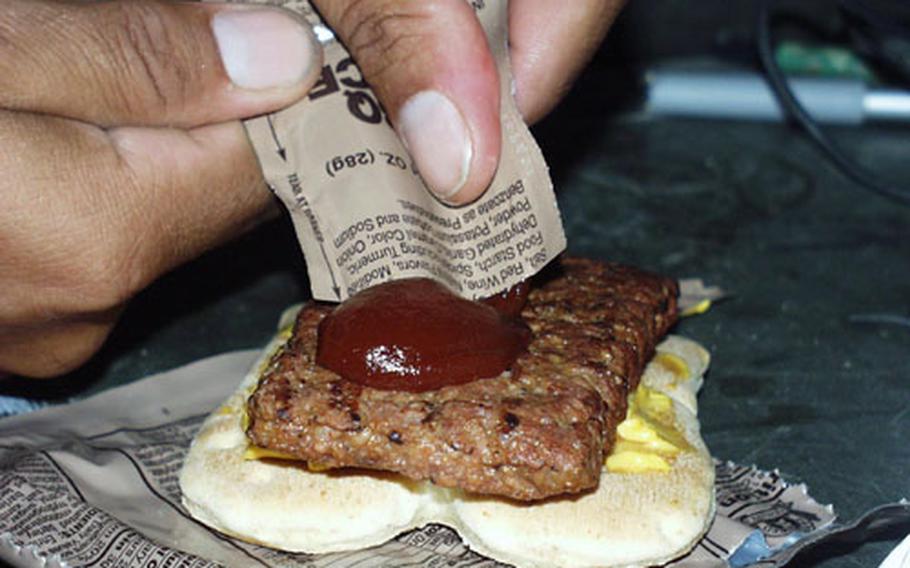 Sometimes, it’s fairly easy to take some ingredients in an MRE and combine them into something different. In this case, 1st Sgt. William Green combined several elements from the No. 8 (Beef Patty) meal to have a cheeseburger. (Kent Harris / S&S)

Sometimes, it’s fairly easy to take some ingredients in an MRE and combine them into something different. In this case, 1st Sgt. William Green combined several elements from the No. 8 (Beef Patty) meal to have a cheeseburger. (Kent Harris / S&S) 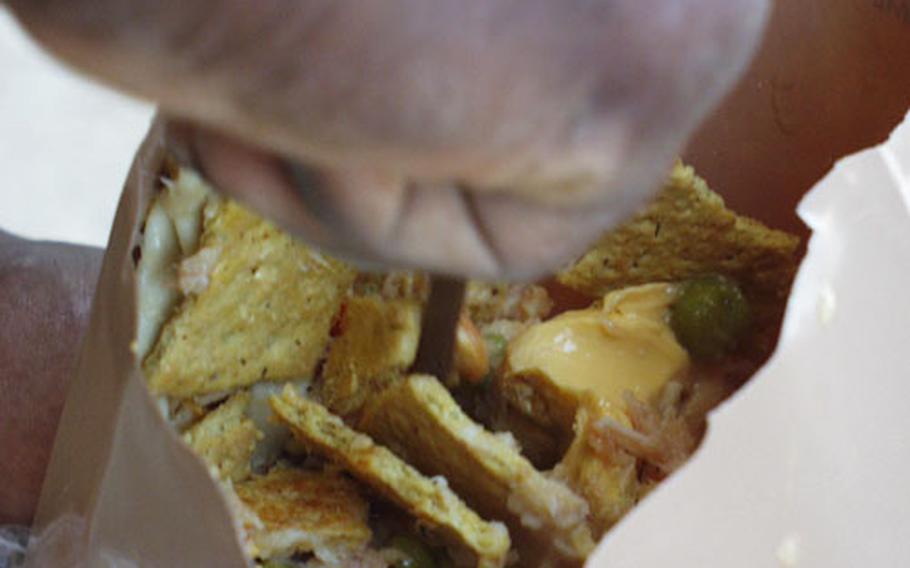 Spc. Rohan Daley takes mixing individual packages from MREs to a bit more of an extreme than some others. This meal includes turkey breast and chicken and noodles entrees as well as a packet of cheese, crackers and a few bottles of Tabasco sauce. (Kent Harris / S&S)

BAGHDAD, Iraq &#8212; Most servicemembers in Iraq aren&#8217;t relying solely on a diet of Meals, Ready to Eat these days.

Dining facilities have sprung up. Food items can be purchased at Army and Air Force Exchange Service locations. Care packages from friends and family supply a lot of specialty items. And more than a few units shop at local businesses to get the makings of a meal.

But almost everyone serving in country is still eating at least one MRE every day or two. And though there are about two dozen menus offered, it&#8217;s pretty easy to get tired of the same old food day after day. Unless, of course, it&#8217;s not exactly the same old food.

Like many soldiers, Nonemaker is a fan of the cheese packet that&#8217;s included in several MRE varieties. Mix it with the main course, add a small bottle of Tabasco sauce, and you&#8217;ve got a different entree.

In theory, the cheese is designed to go with some kind of bread or crackers included in the MRE. But there are other uses for those crackers &#8212; and not just as additional flak protection, as some joke. Crumpled up, they can be added to just about anything.

That crunch also includes dessert. Some soldiers take the pouch containing chocolate drink mix and add less water than suggested. That creates a pudding. From there, you could add crackers for more bulk. Or add peanut butter to create something akin to Reese&#8217;s candy.

That&#8217;s one of few uses for the peanut butter packages, according to many soldiers.

Maj. John Bucker, another surgeon, says you can also save jelly packets from other meals to create that traditional favorite.

Younger soldiers seem more willing to experiment than older ones.

Likewise, it&#8217;s often the enlisted soldiers who are mixing and matching more than the officers.

Spc. Rohan Daley takes it further than most. Asked to show some of the combinations he&#8217;s experimented with, Daley nonchalantly cuts the MRE cover bag in two and starts mixing. A turkey breast entree is joined by a chicken-and-noodles entree. Add a cheese packet, crackers and Tabasco sauce and Daley starts mixing with his spoon.

But would he recommend it to others?

Most menus contain items that don&#8217;t really appear to go together. But that&#8217;s not always the case. William Green, first sergeant of Company B of the 501st FSB, likes meal No. 8 the best. That&#8217;s because he can take the bread out of the packet, combine it with the cheese packet, cook the beef patty, add some sauce and he&#8217;s got a cheeseburger.

He admitted that some items are more challenging than others.

One hard-to-find soldier from the 501st reportedly mixes peanut butter with peaches. Fortunately, that soldier couldn&#8217;t be found for a picture.

Spc. Gerald Anthony, another member of Nonemaker&#8217;s company, thinks he has a better recipe for peaches: Pour the flavored drink mix into the packet.