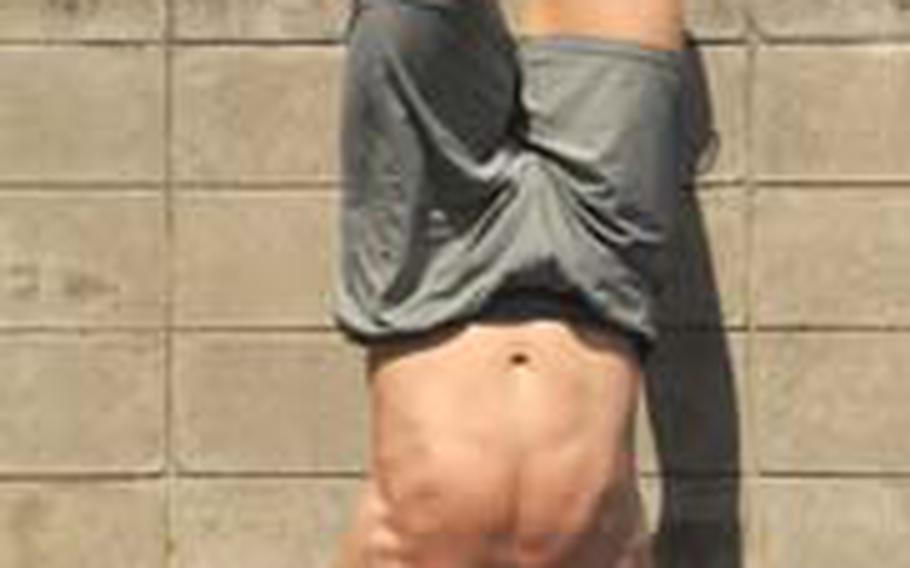 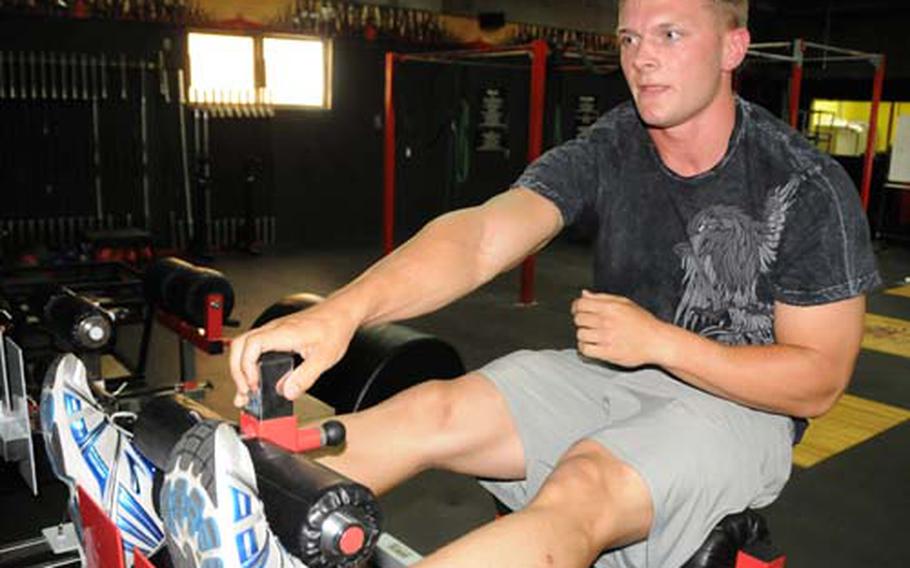 First Lt. Rob Gerdes stretches out at the gym CrossFit Asia in Okinawa City on Tuesday before getting started on his CrossFit workout. (Cindy Fisher / S&S)

A little over a year later, he is on his way to competing in the third annual CrossFit Games in Aromas, Calif., from July 10-12.

Gerdes, 25, a Clara City, Minn., native with 3rd Reconnaissance Battalion, was deployed to Anbar province, Iraq, in April 2008 when he found CrossFit online. Halfway through his first workout, he thought, "This is stupid." It was hard, he said, but it was one more way to keep busy.

So despite his initial skepticism, Gerdes stuck with it, motivated in part by other Recon Marines who were fans of the program.

The simple, everyday movements incorporated into the workouts seem easy on paper, but it&#8217;s the numerous repetitions in short time periods that make it hurt, he said.

"The high-intensity part is the part that makes most people back away from it," Gerdes said.

CrossFit is a strength and conditioning program that tailors workouts to an individual&#8217;s needs and capabilities, according to the CrossFit Inc. Web site. The program has hundreds of affiliates around the world, including more than 30 on military bases.

The program has caught on with some Okinawa-based Marines. In February, five CrossFit instructors held a course that trained about 40 3rd Marine Division Marines as level one CrossFit trainers, according to Marine spokesman 2nd Lt. Scott Sasser, meaning they "understand the concepts of CrossFit and have the basic understanding of how to execute and coach the movements."

"The big thing about CrossFit is that there is no one thing you do all the time," Gerdes said.

"A CrossFit athlete can give a weight lifter and a marathon runner a run for their money," he said.

By the time Gerdes&#8217; unit returned to Okinawa in November, he was hooked. In February, he found a home at the CrossFit Asia gym in Okinawa City.

The gym has 120 members, and 70 percent are active-duty servicemembers, said gym owner Jamie Light. Completing all the movements properly and as quickly as possible in a workout is the goal, Light said. When people do movements incorrectly, he said, they can get hurt.

Light is a former Air Force air traffic controller who left the service in May 2008 after 13 years and stayed on Okinawa with his Japanese wife. Light, once a dedicated bodybuilder, became interested in CrossFit as a fitness alternative and decided to open his own gym after he left the Air Force.

Most of Gerdes&#8217; workouts, while intense, are usually only 10 or so minutes long. His drive to the Okinawa City gym and back is an hour each way.

But his diligence has paid off. He recently took first place in CrossFit Asia&#8217;s regional competition, which qualified him to compete in the international CrossFit games next month.

At the games, he said he will compete against world-class athletes and he can&#8217;t wait "to see what some of the famous guys are going to do."