Get your fill of scares A creepy looking mannequin face is tacked to a wall inside RAF Alconbury&#39;s haunted house. The house will have 12 rooms with about 40 costumed creatures lurking in the darkness. (Sean Kimmons / S&S)

A creepy looking mannequin face is tacked to a wall inside RAF Alconbury&#39;s haunted house. The house will have 12 rooms with about 40 costumed creatures lurking in the darkness. (Sean Kimmons / S&S) 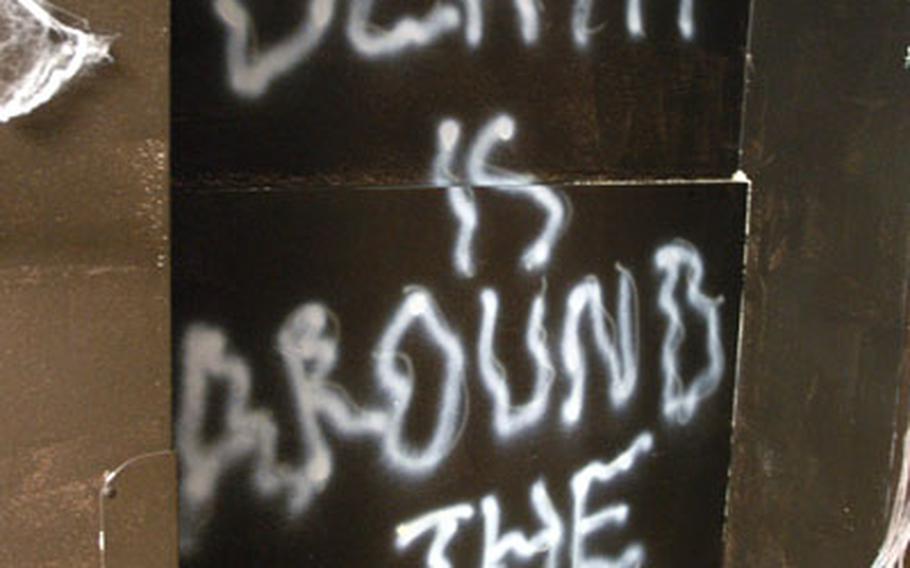 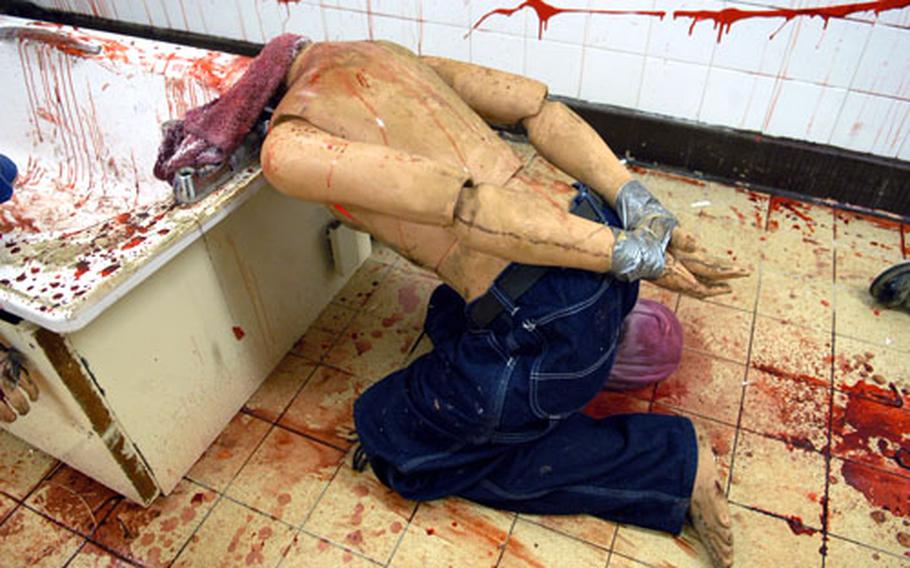 Bloodied walls, hanging body parts and a decapitated body aren&#8217;t things you would associate with a military dormitory.

Actually, it&#8217;s absurd to think of such a thing, unless, of course, you&#8217;re describing Building 692, an abandoned dormitory turned spook house at RAF Alconbury.

Although much of its decorations look bona fide, no one was killed or mutilated in the making of the 12-room haunted house &#8212; hopefully.

Designers of the creepy haunted house, along with many others across U.S. military bases, aim to scare those who dare to enter their confines this Halloween.

About 40 costumed fiends are expected to be roaming through rooms, preying on frightened visitors.

&#8220;I had adults who wouldn&#8217;t go through here last year,&#8221; said haunted house coordinator Tech. Sgt. Jay McKinney, while he and others made touch-ups to the house last week.

Sponsored by the 423rd Air Base Group booster club, the house raked in $1,600 last year for two days of business &#8212; an amazing feat as they only charged $2 to enter. This year, they&#8217;ll be charging the still-cheap price of 2 pounds or $3, with all proceeds going toward on-base functions.

The layout of the house will be similar to last year&#8217;s design, built by 423rd Civil Engineering Squadron carpenter Drew Hammond. New scare tactics will have to rely on the addition of extra creatures lurking in the darkness.

At RAF Mildenhall, the tranquil post office area will be transformed into the deathly Haunted Hollow.

Staff Sgt. Clayton Kitts is the brainchild behind the 100th Logistics Readiness Squadron&#8217;s Haunted Hollow. The squadron had to relocate its annual haunted house into the woods as its previous Haunted World was demolished along with Building 402 over the summer.

Many items were salvaged from the old haunted house, which Kitts will put into his creation. He hopes the wooded area provides a realistic effect that the building couldn&#8217;t re-create before.

Haunted Hollow is projected to have nine rooms enclosed in the dense woodland by camouflage netting and plywood and metal fencing.

There are plans to have at least 20 costumed menaces prowling the grounds, along with a maze and a few shocking sections derived from horror films, he said.

The squadron hopes to raise more funds compared to last year&#8217;s haunted house, which banked roughly $3,500. Admission to those who enter at their own risk is $5 for adults and $3.75 for children.

Children are allowed to enter the sinister woods as long as they know that nightmares will follow.

&#8220;We want to make sure that parents are OK with the idea of children having nightmares after they leave,&#8221; Kitts said.

Haunted houses near you

RAF Mildenhall: The Haunted Hollow (next to the post office) will be open from 6:30 p.m. to midnight Friday and Saturday, and from 6:30 to 11 p.m. Tuesday and Wednesday. It is closed Sunday and Monday. The price is $5 for adults and $3.75 for children.

RAF Alconbury: The Building 692 haunted house will be open at 6 p.m. Friday and Saturday with its lights on for the little ones; the lights will be turned off from 6:30 to 11 p.m. The entry price is 2 pounds or $3.

RAF Feltwell: The Community Center will feature a free children&#8217;s haunted house from 5 to 7 p.m. Wednesday.

RAF Menwith Hill: The Pavilion will hold a free haunted house from 6 to 10 p.m. Friday.