Get on two wheels 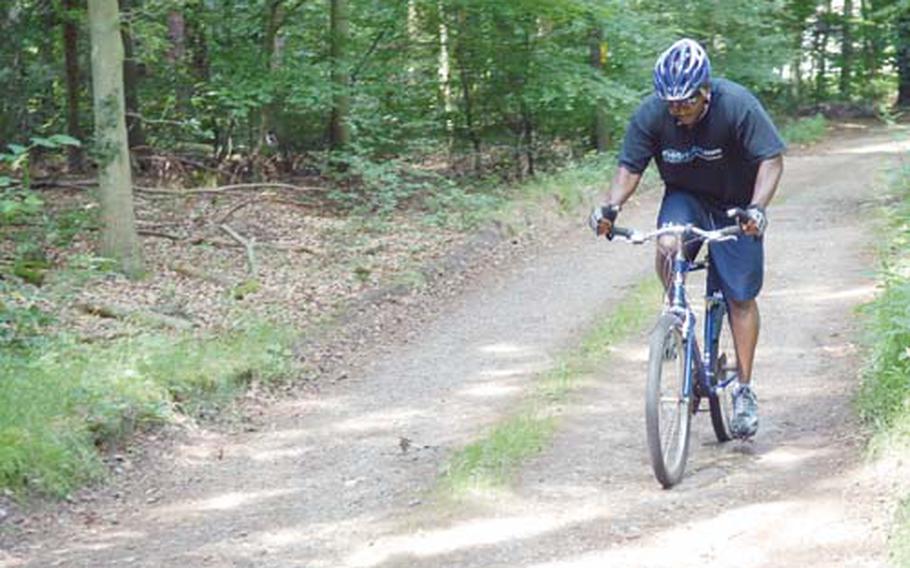 Herman Hicks, a personal trainer at RAF Lakenheath, is an avid cyclist who frequently hits the trails in Thetford Forest via Brandon Country Park. During the summer, Hicks often trains clients in the peaceful park, about a 10-minute drive from Lakenheath. (Charlie Reed / S&S)

Herman Hicks, a personal trainer at RAF Lakenheath, is an avid cyclist who frequently hits the trails in Thetford Forest via Brandon Country Park. During the summer, Hicks often trains clients in the peaceful park, about a 10-minute drive from Lakenheath. (Charlie Reed / S&S) 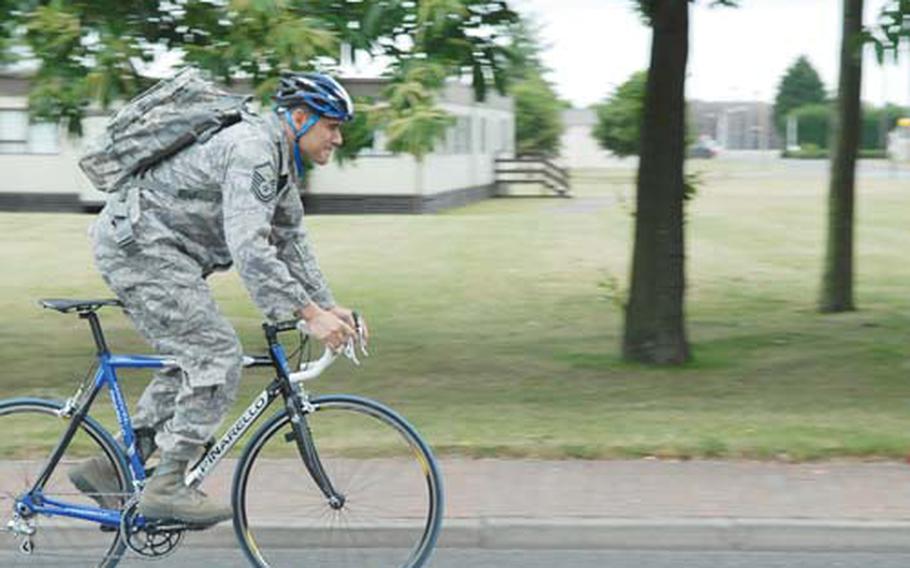 Master Sgt. Frank Monogas heads home from the Pedalers Bike Shop at RAF Lakenheath on his bike. Not only does Monogas get to work on his bike everyday but he also manages to rack up hundreds of miles on weekend rides. (Charlie Reed / S&S)

When the weather is nice, there&#8217;s no better way to take in the sights and fresh air of Britain than on a bike.

"I like the feel of being on a bike on the open roads," said Monagas, a member of the 48th Maintenance Operations Squadron at RAF Lakenheath. "It&#8217;s slow enough that you can see the sights and it keeps you in shape."

Monagas, who got hooked on cycling in 1987 when he began training for triathlons, is among scores of cyclists hitting the streets and off-road trails now that sunny skies and refreshingly long hours of daylight abound.

Monagas considers himself a "roadie" &#8212; or street biker &#8212; and spends weekends riding long stretches of rural roads in East Anglia. He said beginners should avoid biking near the bases and during rush-hour traffic.

"You&#8217;ve got to find a good patch of road without any traffic. It can be dangerous," he said.

But if you&#8217;re not one for dodging traffic and want to take in a bit more of what Mother Nature has to offer, mountain biking might be more to your liking.

"One of the unique things about Britain is the variety of terrain in such a small space &#8212; from the flat areas around your main bases to mountains within a couple of hours&#8217; drive," said Richard Truman, spokesman for British Cycling, an organization that sponsors a variety of cycling events in the United Kingdom.

The best place to hit the trails near RAFs Lakenheath and Mildenhall is Thetford Forest, he said.

With four main trails that range between six and 11 miles and vary in difficulty, Thetford Forest attracts both avid and novice bikers from around the region. There are more than a dozen points of entry at local parks in Suffolk and Norfolk, most of which offer bike and equipment rentals.

If you don&#8217;t have wheels of your own, save some money and rent them from Outdoor Recreation. Prices range from up to $8 for daily rentals to up to $40 for weekly rentals.

And if you&#8217;re thinking of investing in a bike of your own, the Pedalers Bike Shop at Lakenheath can get you set up.

The key for those who are just taking up the sport is not buying a bike beyond their capability, Harrison said.

"People think just because their bike is capable of something, they are too. Then they end up getting hurt or just pushing themselves too hard," he said.

Most beginners don&#8217;t need a full-suspension bike &#8212; one that compensates for up and down movement and requires about 20 percent more effort than a normal bike, he said.

"If you want to get fitter quicker, that&#8217;s the bike for you, but if you want to ride with your buddies you&#8217;re probably not going to be as quick," he said. "The most important things is to have fun and not push yourself too hard."

Log on to www.everydaycycling.org to find a listings of on- and off-road biking trails throughout the U.K. Or check out www.forestry.gov.uk/thetfordforestpark to find out more about the expansive Thetford Forest, considered the best place for mountain biking in East Anglia.