Germany under the gun as Trump seeks bigger NATO contribution 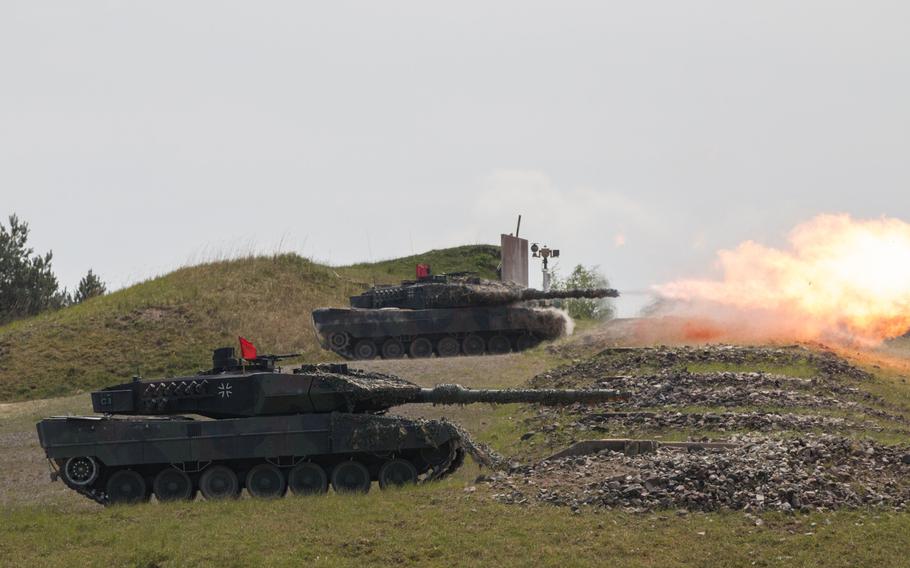 Buy Photo
German Leopard 2A6 battle tanks fire downrange in May 2016 during maneuvers at the 2016 Strong Europe Tank Challenge held at the Grafenwoehr training area. Germany faces problems in upgrading its military after criticism by President Donald Trump. (Michael S. Darnell/Stars and Stripes)

Buy Photo
German Leopard 2A6 battle tanks fire downrange in May 2016 during maneuvers at the 2016 Strong Europe Tank Challenge held at the Grafenwoehr training area. Germany faces problems in upgrading its military after criticism by President Donald Trump. (Michael S. Darnell/Stars and Stripes) 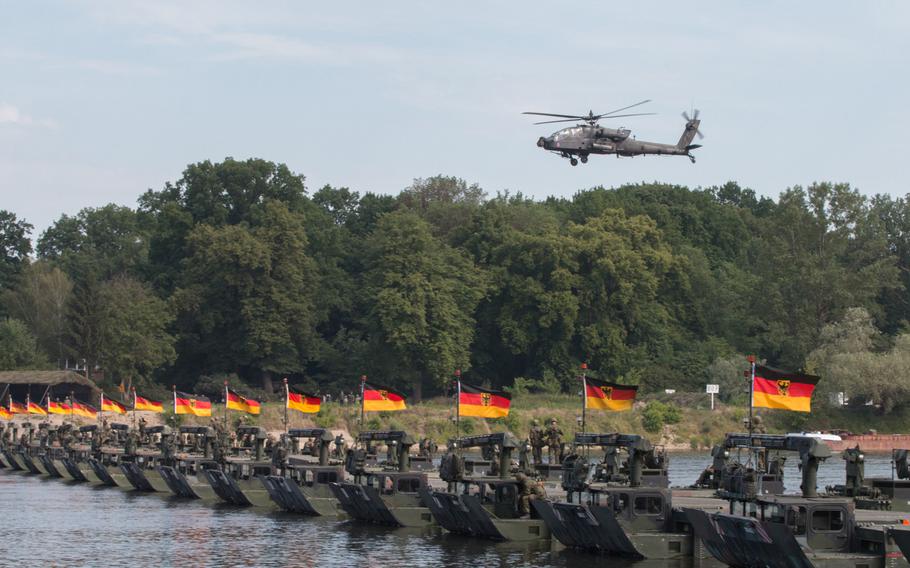 Buy Photo
An AH-64 Apache helicopter soars over a newly constructed bridge over the Vistula River near Torun, Poland, in June 2016. Like many NATO countries, Germany has found it difficult to attain the alliance's defense budget goal of 2 percent of GDP. (Michael S. Darnell/Stars and Stripes) 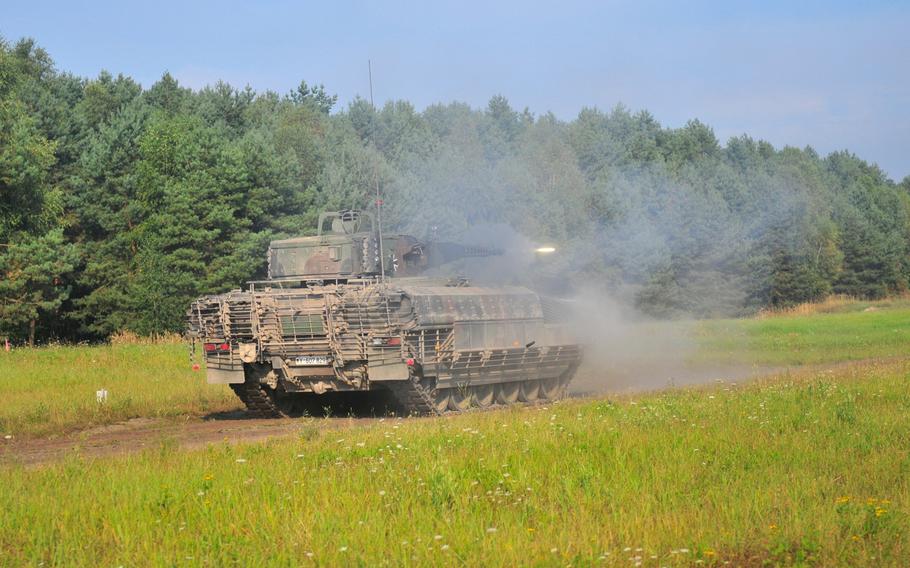 A German Bundeswehr mechanized infantry unit fires on a live-fire range in Bergen, Germany, in September. Like many other NATO members, Germany is nervous about President Donald Trump's commitment to the alliance. (Xeriqua Garfinkel/U.S. Army Reserve) 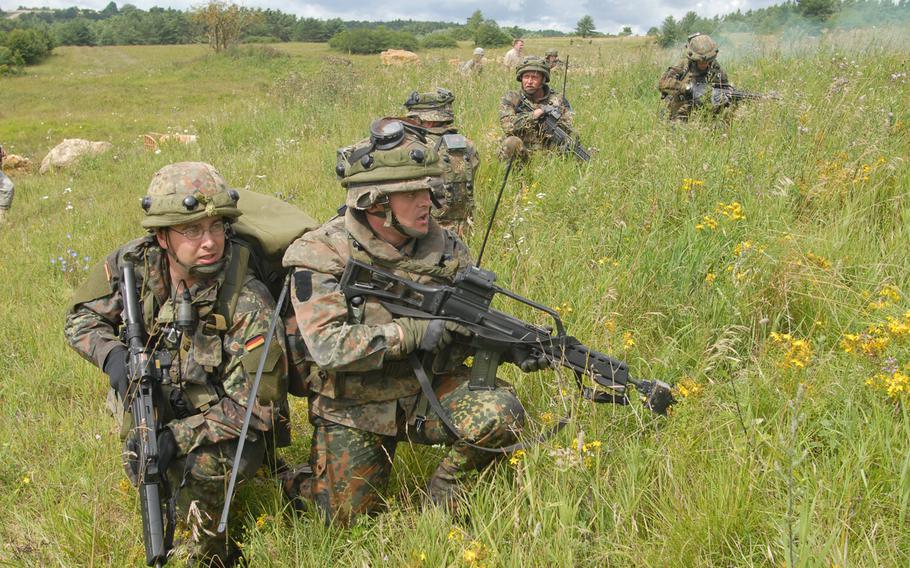 Buy Photo
German soldiers train for deployment to Afghanistan at Hohenfels in 2005. German troops have been part of the NATO-led coalition in in that country for more than a decade. (Seth Robson/Stars and Stripes)

KAISERSLAUTERN, Germany – When German and Dutch armored units recently held a joint exercise, the tanks weren’t allowed to fire their main guns because a military cost-cutting measure prevented them from having the necessary fire prevention team.

Ongoing drills in northeastern Germany illustrate the day-to-day problems Europe’s economic powerhouse faces in upgrading its armed forces and answering the criticisms of President Donald Trump, who says that NATO is obsolete because members are getting a “free ride” at America’s expense.

Like many other alliance members, Berlin is nervous about Trump’s commitment to the trans-Atlantic relationship. He has directly criticized Germany — which hosts the largest number of U.S. troops in Europe — and accused Chancellor Angela Merkel of making a “catastrophic mistake” by allowing into the country more than 1 million migrants, mainly from the Middle East and Africa.

“The Germans have not adapted well to the new Trump administration, and they think they can make the same arguments that they have to past U.S. administrations, highlighting other types of contributions,” said Jorge Benitez, a NATO expert with the Atlantic Council in Washington. “I think we are in for some turbulence between the U.S. and Germany.”

From Dwight D. Eisenhower to Barack Obama, U.S. administrations have long complained about free-riding allies that underinvest in defense. But Trump is the first to suggest a link between allies’ military expenditures and the U.S. commitment to collective defense in Europe.

Given the strength of Germany’s economy, its $19 billion domestic budget surplus and a $60 billion annual trade advantage over the U.S., a status quo approach by Berlin to defense reforms could risk direct confrontation with Trump, who has indicated a willingness to dispense with foreign policy orthodoxy when it conflicts with immediate U.S. economic concerns.

Ever since Russia’s invasion of Crimea in 2014, the German government has scrambled to improve the capabilities of its armed forces, the Bundeswehr. Defense Minister Ursula von der Leyen, in particular, has sought to reverse a post-Cold War slide in defense spending, troop numbers and overall readiness.

Her plans for reform call for adding new troops and increasing the armored forces by 100 main battle tanks, among other items. Berlin has also adopted a more interventionist military policy, sending Tornado reconnaissance jets to join the anti-Islamic State coalition in Syria and Iraq, deploying troops to Africa and leading one of four NATO battalions being deployed to Poland and the Baltics to deter possible Russian aggression.

The German defense budget is set to increase by 2 billion euros in 2017, but the investment of 1.3 percent of gross domestic product still falls well short of a NATO benchmark that calls for 2 percent of GDP.

Only five of NATO’s 28 members — the U.S., Britain, Poland, Greece and Estonia — have reached that mark.

Even with the increases we’ve seen so far, we don’t see (Germany) reaching 2 percent of GDP in the next 10 yers,” said Fenella McGerty, a defense budget analyst with IHS Jane’s. “It would require essentially doubling the defense budget.”

Critics have lambasted the planned reforms as too little, too late.

“The change in direction has started but ... it is much too slow,” military ombudsman Hans-Peter Bartels said. “There needs to be a new mentality,” he said in his annual report released on Wednesday.

Bartels praised von der Leyen’s plan to add 100 Leopard 2 tanks, currently held in reserve, to active armored units which have a total of 225 Leopards in their inventory. But he noted that it would take seven years to modernize and deliver them to the front-line units. “Why does it have to take so long?” he asked.

Bartels also took issue with the plan to add 7,000 new troops by 2023, describing it as growing at a “snail’s pace” and saying that the Bundeswehr would actually need 14,300 more soldiers on top of von der Leyen’s figure.

Analysts have warned that plans to boost the defense budget to NATO’s goal of 2 percent of gross domestic product will be difficult to fulfill. The slow pace has long tested the patience of U.S. presidents and defense chiefs, and is expected to peak under Trump’s “America First” vision.

“Frankly, any U.S. president has a legitimate case against Berlin when it comes to defense spending because these are all self-imposed difficulties that they have given themselves,” Atlantic Council’s Benitez said.

Trump and other critics have repeatedly pointed out that just five of NATO’s 28 members — the U.S., Britain, Poland, Greece and Estonia — have achieved that mark.

Germany’s defense budget this year will amount to 39 billion euros, some 20 billion less than what NATO guidelines stipulate for achieving the 2 percent target.

“It will be almost impossible to reach 2 percent,” said Thomas Wiegold, a Berlin-based analyst. “Even if you showered the military with money, they could not absorb it quickly.”

Analysts say the main limiting factors were Germany’s overly bureaucratic procurement procedures, a general lack of interest among Germans in joining the armed forces and a dwindling pool of young people in an aging society.

“The procurement process is too complicated,” Wiegold said. “Defense industry people say that where it took a year to finalize a contract (during the Cold War), now you need just a year for the lawyers to go through the contract.”

An example of such delays is the government plan, after Russia’s actions in Ukraine, to quickly reactivate the 100 Leopard 2 tanks. Despite the urgency of the requirement, the contract for the new tanks still hasn’t been concluded nearly two years later.

Another issue is recruitment for the armed forces, which became an all-volunteer force after the end of compulsory conscription in 2011. A robust economy and a general historical reluctance to enlist in the military “because of our past,” are serious obstacles, said Wiegold, referring to Germany’s tilt toward pacifism since its crushing defeat in World War II.

In Germany, the idea of increasing military spending is likely to face resistance among left-wing parties.

However, among the political mainstream there is general support for investment in defense, said Daniela Schwarzer, an expert on trans-Atlantic relations at the Berlin-based German Council on Foreign Relations.

“Obviously Germany knows that it has to do more. You can see the trend of budgets slowly increasing,” said Schwarzer, who added Berlin’s larger concern is that Trump could threaten an international rules-based order Germany has come to depend on.

The lack of defense investment in the past in Germany has degraded capabilities. In 2016, only 29 of a stock of 93 Turbo fighters were operational because of equipment and mechanical problems. Similar problems have plagued attack and transport helicopters and fixed-wing transport aircraft, which has hindered operations in support of the campaign against the Islamic State group.

“I don’t think Germany understands the problems they are creating, not just for the U.S., but for European security as a whole. By not being responsible (defense partner) they are creating more instability,” Benitez said.

The magazine, citing anonymous sources, said the encounter culminated in a question for Wittig.

“What can you do for us?” Kushner asked.