Germany sentences asylum seeker to prison for role in attacks on US, Afghan forces 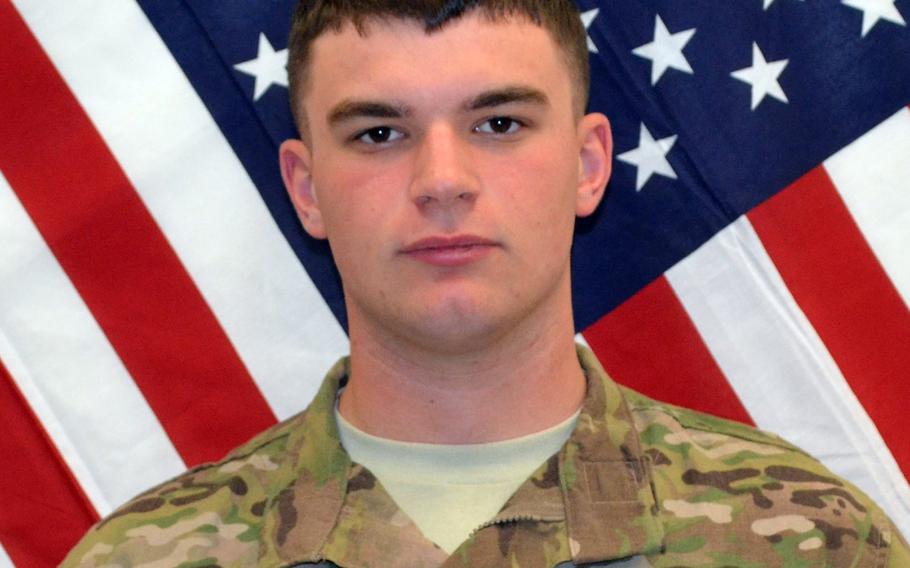 Pfc. Christian Jacob “Jake” Chandler was killed while on a combat patrol in Afghanistan on April 28, 2014, about the same time Abdol Moghadas S. was said to have helped attack a U.S. convoy with the Taliban guerrillas. Chandler’s mother says she was disappointed German authorities didn’t investigate the case more thoroughly. (Department of Defense)

KAISERSLAUTERN, Germany — An Afghan refugee seeking asylum in Germany has been sentenced to four years and 10 months in jail for his role in attacks against U.S. and Afghan government forces while he was a teenager in Afghanistan.

The Higher Regional Court in Munich found Abdol Moghadas S., 21, guilty of attempted murder, according to the Heimatzeitung, a local news site.

A murder charge connected to the death of a U.S. soldier in 2014 was dropped, according to news reports. Abdol — whose full name has not been released in accordance with German law — faced up to 10 years in prison for murder.

A conviction was returned even though prosecutors never definitively stated who Abdol tried to kill, though they suggested he might have attacked two different soldiers who died in the same province where Abdol was located.

Pfc. Christian Jacob “Jake” Chandler was gunned down and killed while on a combat patrol in Afghanistan on April 28, 2014, about the same time Abdol was said to have helped attack a U.S. convoy with the Taliban guerrillas.

Chandler’s mother, Rhonda Beazley, said this week from her home in Texas that she was disappointed German authorities didn’t investigate the case more thoroughly. No one from the German government or prosecutor’s office contacted her — she had heard about the case from the FBI, she said.

“Given the history of their country, I can understand their stance on extradition, and even the death penalty, but I simply cannot understand the reasons to not investigate a case involving crimes against humanity,” Beazley said.

The case against Abdol was built mostly on statements he provided about his time in Afghanistan for his asylum application in Bavaria, where he had settled after fleeing his home country, according to news reports and his lawyer, Marc Juedt.

Germany does not extradite defendants when the death penalty is a potential punishment, as is the case in Afghanistan. The court proceedings were closed to the public because Abdol was a juvenile when prosecutors said he committed the crime.

Juedt told Stars and Stripes on Tuesday that his client accepted the verdict and has chosen not to appeal it. But Juedt told the Heimatzeitung that the court’s decision was wrong, given that it could not “come close to determining the time or the location” of the incident involving the attempted murder charge.

Prosecutors claimed Abdol was an Islamic extremist, but Juedt said that Abdol was forced to join the Taliban.

Soon after joining the guerrillas at the age of 16, he began to work covertly for the Afghan government’s intelligence agency, Jeudt said. He later fled the country after the Taliban became suspicious of him, according to the indictment against him.

Juedt said the court recognized Abdol worked for Afghan intelligence and tried to prevent attacks, yet held him responsible for other attacks, he said.

German federal prosecutors used statements Abdol made, while seeking asylum, about his participation in attacks against U.S. and Afghan forces to charge him last summer with “collaborated murder” — essentially being an accomplice to murder — and attempted murder, among other crimes. He was arrested in February 2017 in Bavaria.

Prosecutors said it was the first time Germany had tried someone for the death of a U.S. soldier abroad, a legal precedent made possible by a legal change that came after the 9/11 attacks.

However, the case was riddled with challenges. Prosecutors offered no direct link to Abdol and the deaths of Chandler or Spc. Kerry M.G. Danyluk, the only other U.S. soldier killed in combat remotely close to where Abdol was at the time. Danyluk died April 15, 2014, at the military hospital in Landstuhl, Germany, several days after being wounded in Afghanistan.

Both soldiers’ names were mentioned during the trial, Juedt said.

Beazley said Wednesday marked the fourth anniversary of the arrival of her son’s remains home.

“Justice was served, in a fashion, and I can live with that,” she said.