Heinz Taubenheim, also known as “Mr. Bourbon,” of Griebelschied, Germany, has amassed what is believed to be the world’s largest collection, almost 1,500 bottles of American whiskey. (Raymond T. Conway / S&S)

Heinz Taubenheim, also known as “Mr. Bourbon,” of Griebelschied, Germany, has amassed what is believed to be the world’s largest collection, almost 1,500 bottles of American whiskey. (Raymond T. Conway / S&S) 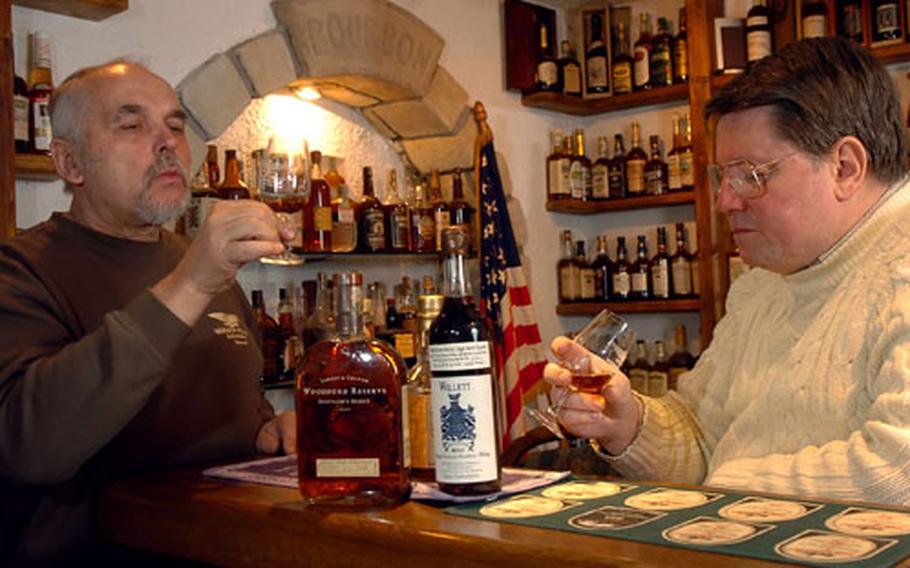 GRIEBELSCHIED, Germany &#8212; Every bottle of whiskey in Heinz Taubenheim&#8217;s cellar has a story.

Point to any in his collection of nearly 1,500 bottles, and he will fetch it off the shelf, gently cradle it in his hand and talk at length about it as if it were his child.

On a Friday afternoon while giving a tour, his eyes grew wide as he poured a bottle of Very Olde St. Nick rye whiskey, which is as dark and almost as thick as maple syrup.

&#8220;This is bourbon heaven,&#8221; Taubenheim says, sticking his nose in the glass to whiff its distinct aroma.

His passion for American-made bourbon and his vast collection, which includes more than 50 labels, has earned him the nickname &#8220;Mr. Bourbon&#8221; from whiskey lovers and enthusiasts.

Although his cellar is in a small village near Kirn nestled in the heart of Germany&#8217;s wine country, he has what he and some bourbon connoisseurs believe could be the world&#8217;s largest collection of American whiskey. People from as far away as Japan visit Taubenheim&#8217;s shrine to U.S.-distilled whiskey.

An American flag flapping from a pole outside of the cellar helps visitors find his place. His driveway is aptly named &#8220;Bourbon Street.&#8221;

The walls of the cellar, which was once used for curing meat, display a history of the distilled spirit. Jack Daniel&#8217;s and Jim Beam grace his shelves, of course, along with George Dickel and Old Rip Van Winkle.

He needs only a glimpse of a dusty label to describe the brand&#8217;s unique taste, history and quality, along with the tale of how he acquired it. His most prized bottle dates to 1855 and is believed to be the oldest, unopened bottle of American whiskey in existence.

Taubenheim, a retired civilian worker for the German military, began collecting American whiskey 35 years ago as an enlisted man in the German army. He began the hobby after visiting a friend in Italy who had a collection of 700 bottles.

He bought his first bottle even though he didn&#8217;t drink alcohol. As the son of a pub owner, he had seen what too much alcohol can do to people too many times and had no desire to drink. It wasn&#8217;t until his collection began to grow and he began meeting other collectors, he said, that he started to drink whiskey.

His cellar has become so full that he began attracting whiskey lovers from across the globe. It has been a popular trip for American generals stationed at nearby bases.

Although some of Taubenheim&#8217;s bottles are worth several thousand dollars, the most expensive and rare bottles are not for sale.

While whiskey lovers can&#8217;t buy his primo whiskey for any price, they can taste them by taking advantage of Taubenheim&#8217;s bourbon &#8220;tastings.&#8221; For 70 euros, visitors get dinner and an evening of sipping bourbon. At an additional cost, a nearby hotel or pension will provide transportation to and from the cellar.

The evening starts around 7 with a dinner of smoked ham and marinated potatoes. Guests then taste 10 kinds of whiskey. Those who drink whiskey but know little about the finer points of the spirit are given a quick remedial course on the differences in aroma and texture.

There is more to American whiskey than Jack Daniel&#8217;s and Jim Beam, Taubenheim often preaches to guests.

Visit his Web site at: