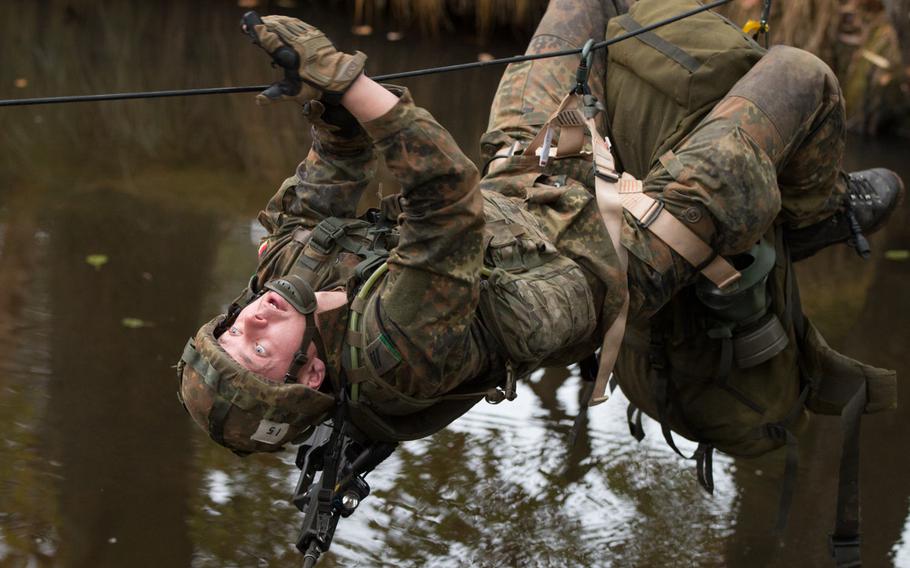 Buy Photo
German Pfc. Vitali Krell dangles from a rope as he crosses an ice-cold river during the final day of the 2015 European Best Squad Competition at the Grafenwoehr, Germany, Training Area, Oct. 19-22, 2015. The Germans beat out 16 other squads to earn the title of Best Squad in Europe. German Chancellor Angela Merkel has said Germany must drastically increase its defense spending. (Michael S. Darnell/Stars and Stripes)

Buy Photo
German Pfc. Vitali Krell dangles from a rope as he crosses an ice-cold river during the final day of the 2015 European Best Squad Competition at the Grafenwoehr, Germany, Training Area, Oct. 19-22, 2015. The Germans beat out 16 other squads to earn the title of Best Squad in Europe. German Chancellor Angela Merkel has said Germany must drastically increase its defense spending. (Michael S. Darnell/Stars and Stripes) STUTTGART, Germany — Germany must spend billions more on defense to shoulder a larger share of NATO’s security burden, German Chancellor Angela Merkel said in a speech that could serve as a political turning point for a country wary of an expanded military role.

The goal, Merkel said, is to dedicate 2 percent of the nation’s Gross Domestic Product to military matters, a NATO spending benchmark that Germany — along with most other alliance members — has failed to achieve.

“In the 21st century, we won’t be getting as much help as we got in the 20th,” Merkel said Saturday at a conference of young conservatives from her Christian Democratic Union party in the city of Paderborn. “We need to greatly increase it (the German military budget) to get from 1.2 to 2 percent.”

The goal of 2 percent of GDP was adopted by NATO’s nations a decade ago, but currently only five member states fulfil the nonbinding requirement: the U.S., Estonia, Greece, Great Britain and Poland.

To reach 2 percent, Germany must increase spending to $66 billion by 2020, about $25 billion more than is currently planned by 2020. Threats on “Europe’s doorstep,” require more investment, Merkel said.

While it is unclear whether Merkel has the political backing for such a move, her comments are the sharpest signal yet from Berlin about its intent to strengthen a national military that critics say has suffered from years of under investment.

During her speech, Merkel also said she was under pressure from President Barack Obama to dedicate more resources to defense, and that the U.S shouldn’t carry an outsized NATO security burden.

“We have to spend more for our external security,” Merkel said. “The conflicts of this world are currently on Europe’s doorstep, massively so.”

For years, the U.S. military and political establishment in Washington has blasted allies in Europe for underinvesting in their own defense in contrast to the U.S. which spends 3,4 percent of its GDP on defense.

“The blunt reality is that there will be dwindling appetite and patience in the U.S. Congress, and in the American body politic writ large, to expend increasingly precious funds on behalf of nations that are apparently unwilling to devote the necessary resources ,” then Defense Secretary Robert Gates said in a 2011 speech viewed at the time as a warning shot to NATO allies.

The topic has emerged as a campaign issue in the current presidential election, with Republican nominee Donald Trump arguing that allies who don’t pay their fair share wouldn’t necessarily be protected by American security guarantees.

In Germany, the idea of ramping up military spending is likely to face resistance among left-wing parties.

However, there are signs that the general public is now more open to a more robust military, a notable reversal for a country that after its World War II defeat insisted on a foreign policy that avoided foreign military entanglements.

With a more assertive Russia to the east and concerns about instability along NATO’s southern flank, spending more on defense could now be viewed by the public as a necessary step in self-defense. For example, a December 2015 poll found 56 percent of respondents favored increasing the size of Germany’s armed forces, compared with 30 percent who rejected the idea.

During the past two years, Germany has gradually taken on a larger role in international security matters, with troops conducting training missions in places such as Iraq and Mali. Berlin also has plans to build a military outpost in Niger, a country on the front lines in counterterrorism efforts in Western Africa.