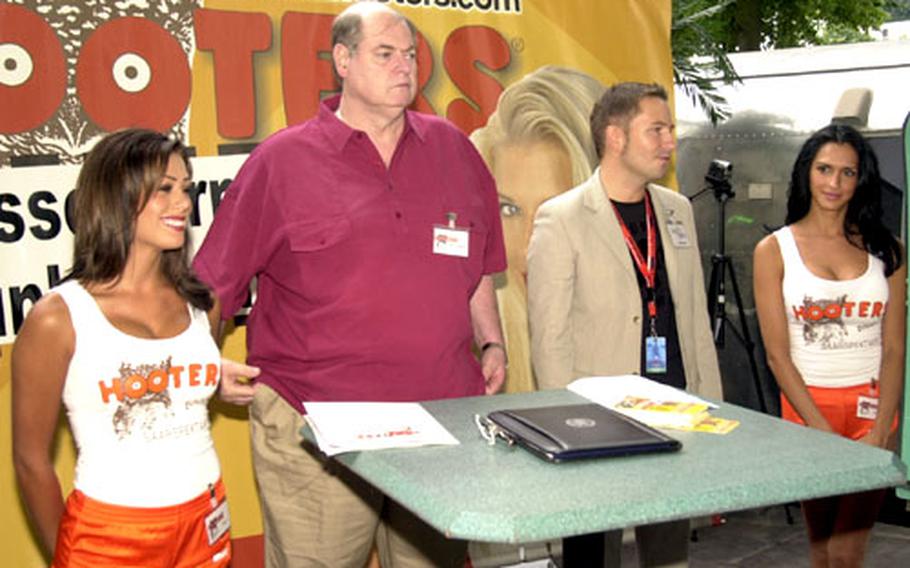 Hooters officials announce Friday morning that the first Hooters in Germany will open in mid-October in Neunkirchen, about a 30-minute drive from the Kaiserslautern military community. (Steve Mraz / S&S)

SAARBR&#252;CKEN, Germany &#8212; Good news: The first Hooters restaurant in Germany is set to open in mid-October.

Sort of bad news: The well-known American sports bar/restaurant won&#8217;t open in Ramstein, as previously reported, but rather in Neunkirchen.

The location change isn&#8217;t devastating news, considering that Hooters and all the perks that come with it will be within a 30-minute drive for the nearly 54,000 Americans that live in the Kaiserslautern area. As an added bonus, Hooters officials are exploring the possibility of having weekend buses run from Ramstein Air Base to the Neunkirchen Hooters.

While Hooters is best known for its mouth-watering, um, chicken wings, the company isn&#8217;t shy about flaunting its most valuable assets, having flown two Hooters girls to Germany for Friday morning&#8217;s news conference.

Grindrod, a military brat and 1968 graduate of Frankfurt American High School, said he feels a personal responsibility to the forthcoming Neunkirchen Hooters.

The Hooters will be located in Neunkirchen&#8217;s Wasserturm, a former industrial area that now houses a movie theater and several bars. The 5,500-square-foot restaurant will have 180 seats, American beers on tap and accept U.S. dollars.

Big screen TVs will show American sports. Hooters wing sauce and breading will be imported from the U.S. to ensure that the wings in Neunkirchen taste just like the Hooters wings back home. Unlike back home, the Neunkirchen Hooters will be open from 10 a.m. to about 4 a.m.

The restaurant chain hopes to open several Hooters throughout Germany and Europe in the coming years.

Grindrod said he is positive that Hooters will be a success in Germany.