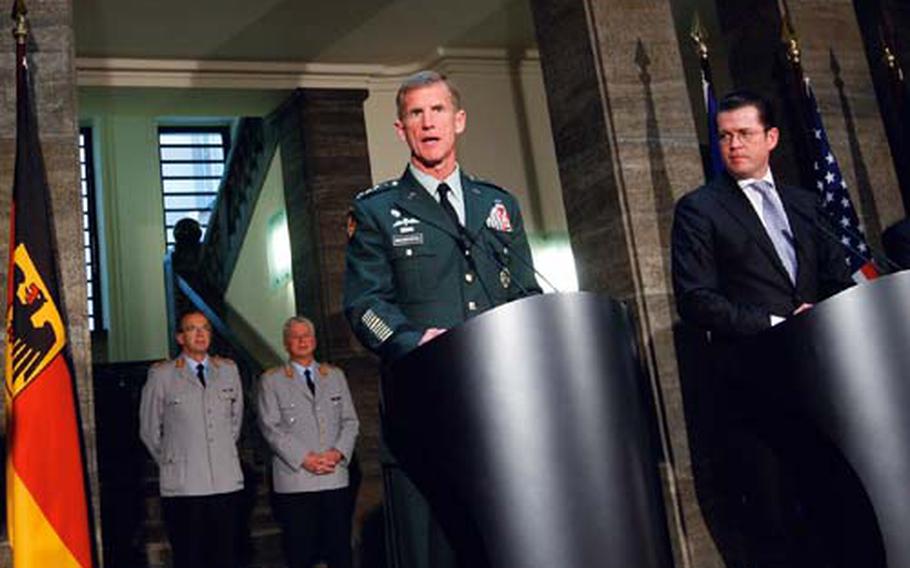 Fourteen U.S. soldiers were honored Wednesday for risking their lives to help German soldiers in a firefight, according to The Associated Press.

The Gold Cross medal is one of Germany&#8217;s highest awards for valor, and this is the first time foreign troops have ever been given this award.

U.S. medics braved fire from Taliban fighters to help bring wounded Germans to safety near the city of Kunduz in northern Afghanistan on April 2.

A German army detachment was patrolling southwest of the city when it was attacked, according to AP.

German troops and Afghan police reportedly exchanged fire with their attackers for an hour, with fighting resuming three hours later. A local government representative estimated there were about 200 Taliban fighters.

The Americans were &#8220;more than brave to save the lives of our men,&#8221; Guttenberg said in a visit to the country after the attack.

After meeting with McChrystal on Wednesday, Guttenberg expressed his support for the mission in Afghanistan and said he would provide his troops with the &#8220;best possible protection and equipment,&#8221; according to the website of the Hamburg newspaper Die Zeit.

Germany is a key partner in the coalition in Afghanistan, maintaining more than 4,000 soldiers in the north. A total of 42 German soldiers have died in the country since 2002, according to www.icasualties.org.