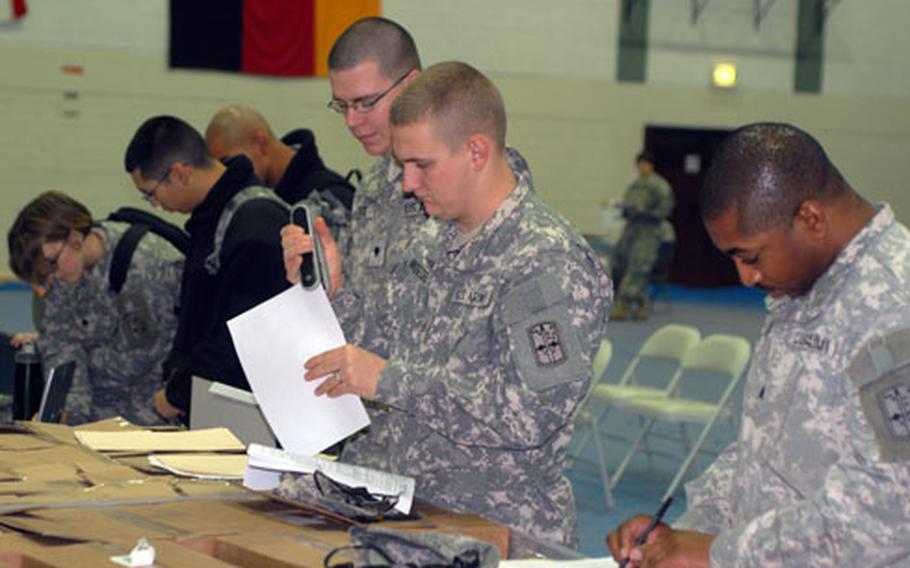 GRAFENW&#214;HR, Germany &#8212; The 172nd Infantry Brigade has cased its colors and soldiers are making final preparations to deploy on a yearlong mission to Iraq.

The ceremony capped the two-day "Blackhawk Rendezvous" &#8212; a series of sports events including combatives, flag football, handball, ax throwing and archery &#8212; designed to boost soldier and family morale ahead of the deployment, he said.

This week 172nd soldiers were filing through processing centers at Grafenw&#246;hr and Schweinfurt to take care of last-minute paperwork.

"We are basically ensuring that soldiers can go to the theater of operations without worrying about garrison responsibilities," he said.

Soldiers with families in Germany went through a separate process that included spouses and officials from Army Community Services, the legal office and chaplains, he said.

Staff Sgt. Luis Osejo, 29, of Miami, said his focus is on financial matters.

"Hopefully by the time I get back it will be paid for," he said.

"My wife was a little scared about coming here since I&#8217;m going downrange," he explained.

It will be Osejo&#8217;s first mission downrange.

He spent the last few years supporting ground troops in a military intelligence unit back in the U.S., he said.

Sgt. Gretchen Hubbard, 21, of Toledo, Ohio, only got back from a 15-month mission to Iraq a year ago.

She used her time in Europe to go snowboarding in Switzerland, attend Oktoberfest in Munich, Germany, and visit Prague in the Czech Republic.

Is it too soon to go back downrange?

What goes through a soldier&#8217;s mind in the final days before deployment?

"After all the stuff is packed up, that part can be a little annoying, but after all of it is gone, you are excited to go," she said.