Sen. Joe Biden, D-Del., talks with from left, Staff Sgt. Jason Tipler, Master Sgt. Ray Hensley and Staff Sgt. Chris Droegemueller, at the Tbilisi, Georgia, airport on Sunday. Hensley is a load master on a Ramstein, Germany-based C-130 Hercules that was delivering humanitarian aid to the Georgian capital. Tipler and Droegemueller of the 86th Air Mobility Squadron are unloading the U.S. Air Force planes ringing aid to the Georgian capital. Biden was on a quick fact-finding trip to the country. (Michael Abrams/S&S)

Sen. Joe Biden, D-Del., talks with from left, Staff Sgt. Jason Tipler, Master Sgt. Ray Hensley and Staff Sgt. Chris Droegemueller, at the Tbilisi, Georgia, airport on Sunday. Hensley is a load master on a Ramstein, Germany-based C-130 Hercules that was delivering humanitarian aid to the Georgian capital. Tipler and Droegemueller of the 86th Air Mobility Squadron are unloading the U.S. Air Force planes ringing aid to the Georgian capital. Biden was on a quick fact-finding trip to the country. (Michael Abrams/S&S) 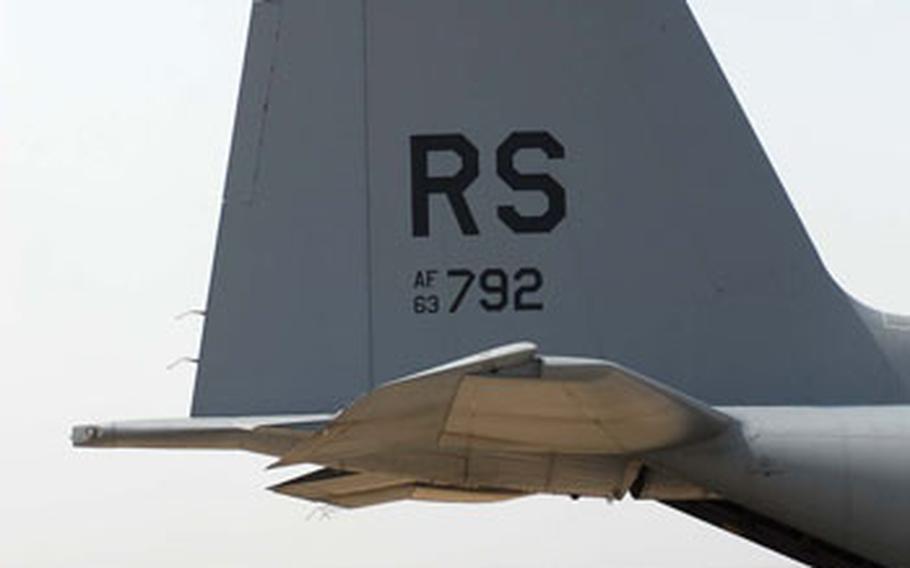 Cargo from a Ramstein Air Base, Germany-based C-130 Hercules is unloaded in Tbilisi, Georgia, on Sunday. The Air Force is delivering humanitarian aid to the Georgian capital. (Michael Abrams/S&S)

TBILISI, Georgia &#8212; The soldiers from Hohenfels, Germany, watched as the Russian jets screeched through the sky, flying low and dropping bombs on the grounds where 1,000 U.S. military personnel were training just days earlier.

On Aug. 8, when the bombs hit Vassiani military base, just outside of the Georgian capital of Tbilisi, two U.S. soldiers were still on the scene. Luckily, they escaped uninjured. Other soldiers watched the surreal spectacle unfold from another nearby Georgian military installation, located a few kilometers away.

"We saw the skyline lighting up," recalled Sgt. 1st Class Jarrod Gozy, a trainer from the Joint Multinational Readiness Center in Hohenfels. "That night we high-tailed it out of there to the hotel."

Now, the soldiers are taking part in a different sort of mission.

At the Georgian military air base, next door to Tbilisi International Airport, C-130s have been flying in regularly from Ramstein Air Base, Germany, loaded with humanitarian supplies.

The soldiers are making sure the pallets of relief aid get onto trucks bound for one of the centers where roughly 700 displaced people are in need.

The Hohenfels team of trainers&#8217; long-standing relationship with the Georgian military and other local agencies helps matters, according to the soldiers.

"From our time doing training here, we&#8217;ve got such a rapport with these guys. They&#8217;re able to make things happen for us," Gozy said.

On Sunday, the first delivery of the day was 10,000 pounds of sleeping bags and cots.

Aboard that flight was the commander of the 86th Air Mobility Squadron, who arrived to survey the scene. The first order of business for Air Force Lt. Col. Kevin Therrien was to determine how quickly the pallets could be moved out of the area or stored nearby.

Whitman said the relief operations on the ground are under the command of Army Brig. Gen. Jon Miller, deputy commander of 21st Theater Sustainment Command, based in Kaiserslautern, Germany; and commander of 7th Army Reserve Command in Heidelberg, Germany.

If bigger C-17s get involved in delivery, steps need to be taken to ensure that goods don&#8217;t piled up, Therrien said.

And it looks like those C-17s are on the way.

In addition to the two regular C-130 flights delivering relief supplies, the Defense Department will fly C-17s with food to Georgia beginning Tuesday and lasting for several days, Whitman said.

As of Monday, the Defense Department had delivered about 130 short tons of supplies to Georgia, Whitman told reporters.

The Fleet Logistics Support Squadron 46 (VR-46), a Reserve unit from Naval Air Station-Atlanta in Marietta, Ga., is about three weeks into a two-month deployment to Sigonella.

When pallets arrive, they&#8217;re quickly unloaded and hauled away by Georgian contractors working at the base.

While the military is bringing in the supplies, the U.S. State Department, the USAID and the Georgian government are coordinating with nongovernmental organizations to get the goods to the people.

But with tens of thousands of Georgians uprooted and taking shelter at hundreds of centers scattered across the country, getting the right supplies to the right people is a challenge.

"We need help distributing in an organized way," said Georgy Baramidze, Georgia&#8217;s European integration minister, during a visit to the airfield on Sunday.

Baramidze shared his thoughts while escorting visiting U.S. Sen. Joe Biden around the base.

During his brief tour, Biden, D-Del., examined the incoming supplies and greeted the Ramstein Air Force crewmembers before being whisked away to visit one of the centers for displaced people.

Ramstein flight crews have been working around the clock, flying back and forth from Germany to Tbilisi. After flying six hours, the C-130s touchdown for about an hour to unload. After that, they lift back off to resupply.

"This is the best part of the job. Being able to help people," said 1st Lt. Jesse Barnes, a C-130 navigator from the 37th Airlift Squadron.

As for the roughly 115 U.S soldiers who remain in the country, EUCOM says they are on stand-by in case they are needed to help with the delivery of supplies. However, the soldiers could be home in a matter of days if it is decided their presence isn&#8217;t required.

According to the U.S. Embassy in Georgia, there is no immediate plan to involve soldiers in a hands-on way with the delivery of goods.

In some cases, this humanitarian effort translates into long days for soldiers at the airfield. For others, it means wrestling with cabin fever in the hotel room, waiting for a mission.

But staying in Georgia serves another purpose, according to some of the soldiers.

"I think it was important that we stayed here. It sent a message that we don&#8217;t just pull out," Gozy said.

Though some soldiers have been asked by locals about why they aren&#8217;t in the fight, most understand that&#8217;s not the military&#8217;s role in Georgia, according to Gozy.

Still, when reports of Georgian casualties come in, it hits the trainers hard.