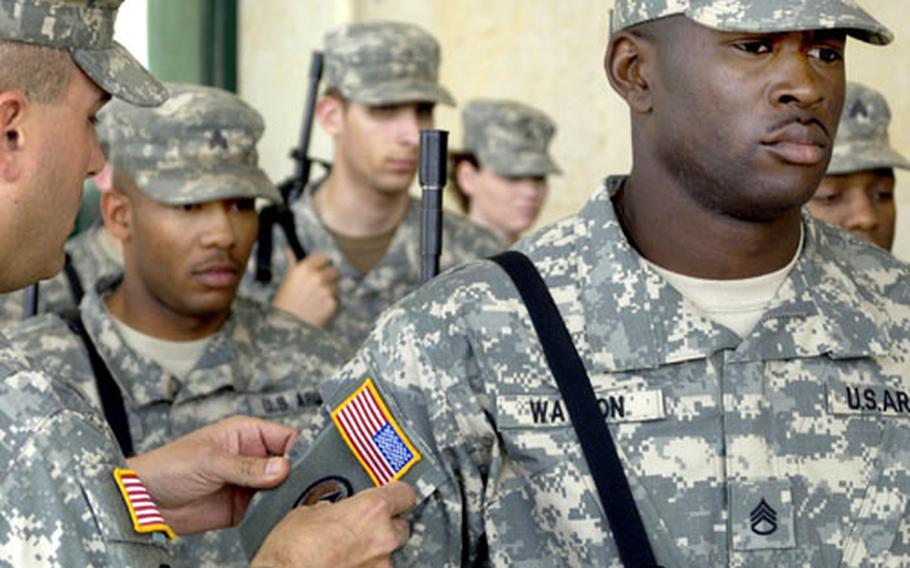 A group of Germany-based soldiers are the first Europe-based troops in Iraq to wear the new Multi-National Corps-Iraq combat patch, officials said Thursday.

The troops, from the V Corps headquarters element, put the patches on their right shoulders at a March 15 ceremony at the Al Faw Palace on Camp Victory in Baghdad. The wearing of combat patches is a long tradition in the U.S. Army, and signify under which command a soldier served at war.

&#8220;Be proud of your new symbol of wartime experience, as it reflects positively about each and every one of you and your continued sacrifice and commitment during this time of conflict,&#8221; Lt. Col. Mark Gorton, commander of the Multi-National Corps-Iraq Special Troops Battalion, said in a military news release.

The MNCI patch was approved by the Army&#8217;s Institute of Heraldry in January 2005, officials said. The patch itself consists of two waving blue bars (&#8220;representing the Tigris and Euphrates Rivers and Iraq&#8217;s title as &#8220;the land of two rivers&#8221;) with a palm wreath above the bars.

An upward-pointing black spear in the center represents &#8220;military readiness and might,&#8221; the release read. The patch is red, white, blue, black, and green, an amalgam of the U.S. and Iraqi colors.

This is the second time V Corps headquarters soldiers have deployed to Iraq. In 2003, the unit was the command element for the invasion, staying in country for a year.