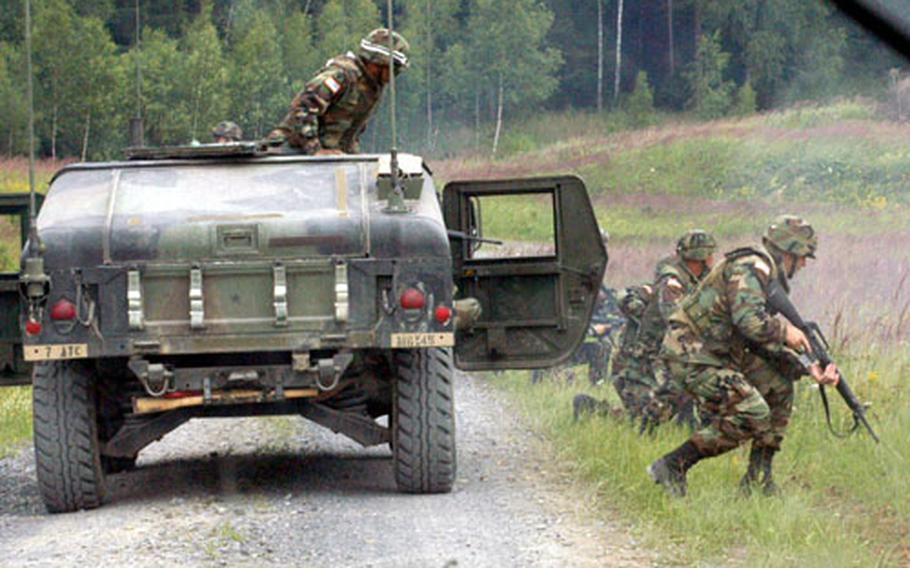 Deploying through the smoke of the simulated explosion of an IED, troops of the 2nd Military Intelligence Battalion engage targets as part of their convoy live-fire drill. (Ben Murray / S&S)

Deploying through the smoke of the simulated explosion of an IED, troops of the 2nd Military Intelligence Battalion engage targets as part of their convoy live-fire drill. (Ben Murray / S&S) 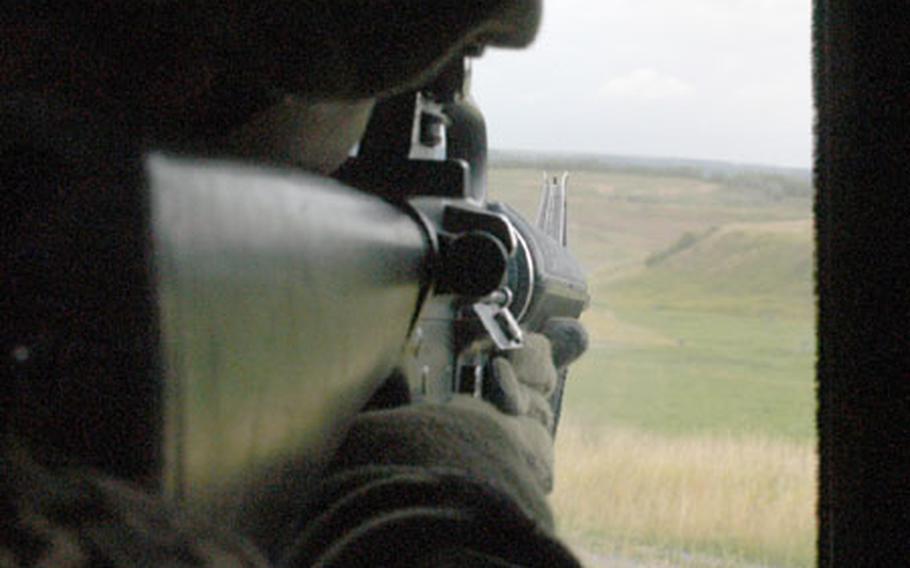 VILSECK, Germany &#8212; Normally, the soldiers and civilians in Lt. Col. Anthony Crawford&#8217;s 2nd Military Intelligence Battalion remain &#8220;under the surface,&#8221; he said, preferring not to be noticed.

As intelligence professionals dealing in counterterrorism, they&#8217;re the ones working in small, keep-to-themselves groups behind the curtains in combat theaters, but rarely behind the sights of a gun.

So when a group of 2nd MI soldiers rolled out in a convoy of Humvees at the Grafenw&#246;hr training area Wednesday loaded for bear and looking for targets, the unit&#8217;s commander was watching with approval.

Many in the small group of several dozen from the Darmstadt- based unit who are preparing for a late-fall deployment hadn&#8217;t fired a weapon since basic training, Crawford said, and almost none had ever practiced a convoy live-fire drill.

The exercise is one of the golden moments of a relatively new emphasis in the military: making sure all soldiers, regardless of duty title, are ready to shoot back whenever roving the dangerous roads of Iraq or Afghanistan. It&#8217;s a program that bears fruit with a group such as the 2nd MI, said the unit&#8217;s Command Sgt. Maj. Maurice Mitchell.

&#8220;It was always looked to as something the infantry does,&#8221; said Mitchell, who has more than 20 years of service in the military. But with the nature of today&#8217;s conflicts constantly placing support soldiers in harm&#8217;s way, the training has had to be adjusted, and troops know they might need some skills normally associated with battle-hardened infantry units, he said.

On Wednesday, the 2nd MI was working through the penultimate challenge in a support unit&#8217;s reintroduction into combat maneuvers, the live-fire convoy exercise, which combines tactical communication, vehicle coordination and firing on the move. It&#8217;s a tall order for soldiers who don&#8217;t normally spend their days rumbling through the countryside, firing clips.

Few in the group had even met before the training started, Crawford said, meaning that he had to start from scratch to build a unit capable of defending itself during its upcoming mission.

But after two weeks of build- up, Crawford&#8217;s group was rolling along in columns of five Humvees at a time, weapons hanging out the windows.

When targets popped up out of the grass, they were quick to pour on the fire, and managed to quickly respond to a simulated improvised explosive device attack, dismounting and setting up a helicopter landing zone for a &#8220;wounded&#8221; soldier.

But still, the two-week train-up didn&#8217;t quite allow for the unit&#8217;s complete conversion from a group of deep thinkers into a crew of deadly operators &#8212; safety staff at the training area were heavy on the helpful pointers and warnings about what lay ahead on the range.

&#8220;Maybe you won&#8217;t go out chasing dudes down Fallujah alleyways,&#8221; Capt. Bret Woolcock said with a hint of admission, but the 2nd MI was already far more capable of defending itself than it had been a week ago.