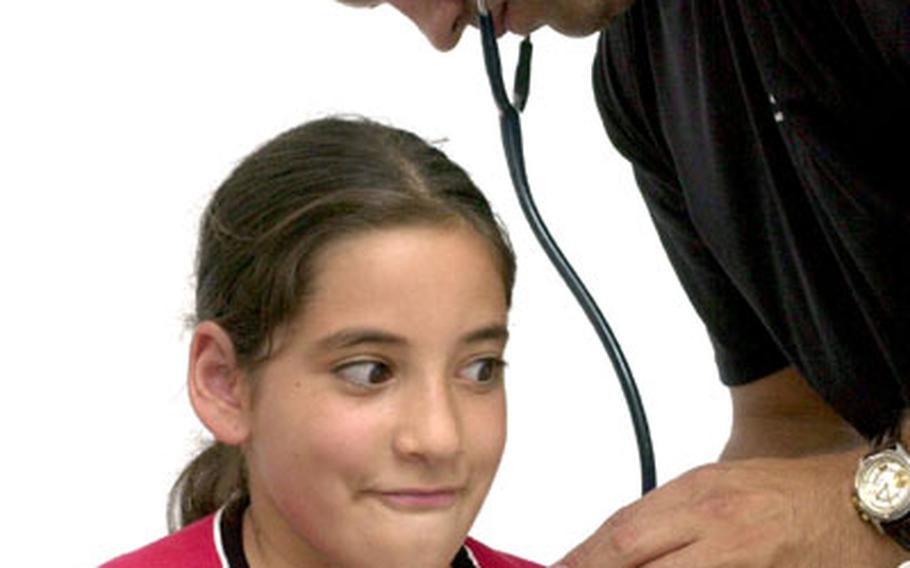 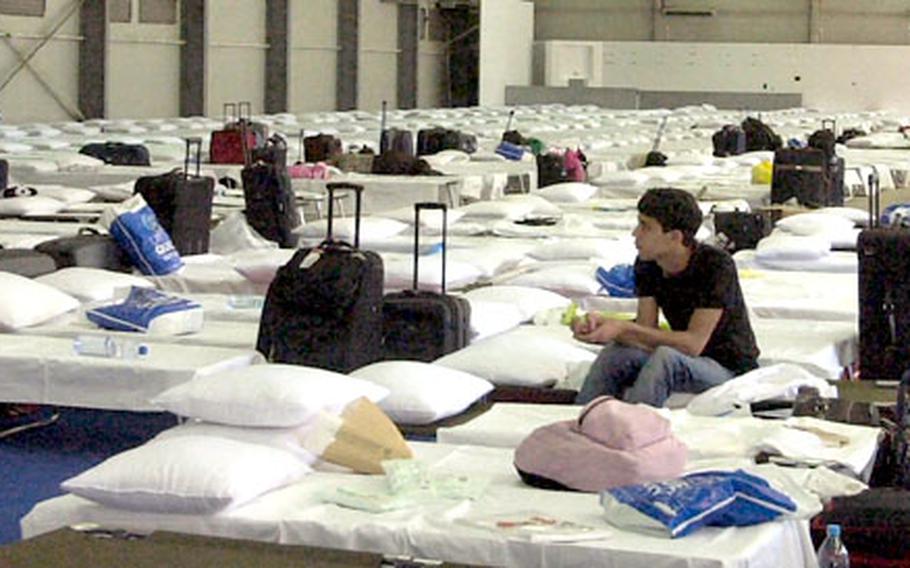 An American evacuee from Lebanon sits on a cot among hundreds of empty beds at the Cyprus International Fairgrounds in Nicosia, Cyprus on Friday. (Scott Schonauer / S&S)

NICOSIA, Cyprus &#8212; Before Air Force doctors and nurses opened their makeshift clinic in an office room not much bigger than a custodian closet, a line of patients had already formed.

Dozens of Americans evacuated from Lebanon came with a range of ailments, from as minor as a small cut to as serious as a severe skin condition in which the skin peels away as if seriously burned.

The doctors, nurses and medical technicians from the Ramstein, Germany-based 435th Medical Group arrived at Cyprus International Fairgrounds to provide medical care to evacuees waiting for flights to the United States.

The Pentagon sent the medical team &#8212; consisting of personnel from both Ramstein Air Base and Landstuhl Regional Medical Center &#8212; on a moment&#8217;s notice to the island to aid the small number of doctors and nurses helping American evacuees.

Doctors said many of the patients arriving from Lebanon are carrying the emotional trauma from the fighting in Lebanon between Israeli forces and Hezbollah fighters.

The sprawling fairgrounds in the Mediterranean island&#8217;s capital is serving as a holding area for evacuees as the U.S. government ferries people onto and off of Cyprus. Hundreds of cots in warehouselike buildings serve as temporary lodging for as many as 4,000 evacuees at a time.

Evacuees are brought to the island by U.S. military helicopters and ships and those who do not get on a flight are brought north to the fairgrounds to rest and wait. The State Department estimates as many as 17,000 Americans could be evacuated from Lebanon to cities in the U.S. through Cyprus in the next several days.

Richard Nicholas, a U.S. State Department regional medical officer and doctor who is overseeing the medical care of evacuees, said that number is higher than originally anticipated and he worried that they would not be able to treat the influx of patients. Doctors and nurses from the area volunteered to help.

When the U.S. military medical team arrived earlier in the week, including the 22-member Air Force team on Thursday, he said it &#8220;made my day.&#8221; Navy medical personnel also are helping treat evacuees.

Medical teams are located at a port, two airports and in the capital.

The Air Force team used a tiny room at the fairground with only a table and a few chairs to see patients who lined up under a piece of paper with &#8220;medical&#8221; scrawled on it with a ballpoint pen.

The team saw people with coughs and colds, blood pressure problems and small cuts. They treated about 70 patients at the fairgrounds on Friday, including an 8-year-old who had to be rushed to a hospital.

The boy had chronic epidermal necrolysis, an uncommon skin condition that mimics second- and third-degree burns.

Tech. Sgt. Anthony Griffin, an Air Force medical technician from Landstuhl, treated a 15-year-old boy who had a minor cut on his knee.

Daniel Elia, of Atlanta, fell off his bike in Lebanon earlier in the week trying to seek cover from an Israeli jet streaking overhead.

Members of the Air Force&#8217;s 435th Medical Group got little sleep in the past three days because they had to rush to get to Cyprus, but some said getting the chance to treat evacuees was like a shot of espresso.

This was Short&#8217;s first deployment, and she was pumped about going into Lebanon despite the dangers. The team plans to stay in Cyprus until the evacuation is completed.