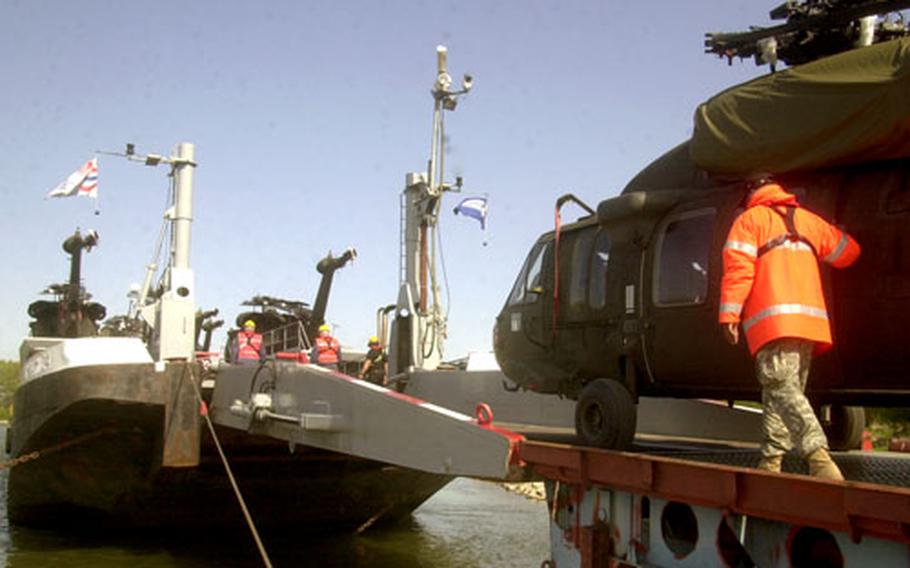 Black Hawk helicopters are loaded onto a barge in Mannheim, Germany, Friday morning as the last helicopters from the 1st Infantry Division headed to the States begin their journey to Fort Riley, Kan. (Steve Mraz / S&S)

Black Hawk helicopters are loaded onto a barge in Mannheim, Germany, Friday morning as the last helicopters from the 1st Infantry Division headed to the States begin their journey to Fort Riley, Kan. (Steve Mraz / S&S)

The last of the 1st Infantry Division helicopters bound for the United States as part of transformation were loaded up for their journey Friday morning.

&#8220;These helicopters are all going [to the continental U.S.] for the 1st Infantry Division&#8217;s move to Fort Riley,&#8221; said 1st Lt. Christopher Casper, port and strategic air officer in charge with the 2nd Battalion, 502nd Aviation Regiment in Mannheim.

Several Black Hawk helicopters from 1st ID and the 1st Armored Division units that will ultimately reflag under the 1st ID this summer in Fort Riley, Kan., were placed on a barge near Coleman Barracks. Military sealift command ships will eventually transport the helicopters to the States.

This return is at the direction of the Department of the Army as part of the Army&#8217;s conversion of aviation assets worldwide into 11 new combat aviation brigades, according to U.S. Army Europe. Upon arrival in United States, the brigade&#8217;s units will become part of the 1st Infantry Division CAB that is forming at Fort Riley.

After the helicopters were washed and prepared for customs, they were transported to the barge site and loaded onto the barge by bobtail semi trucks.

Casper, of the 2-502nd Aviation Regiment, which ran the operation, agreed.

Despite losing the helicopters, USAREUR will have a combat aviation brigade. The plan is to combine remaining V Corps aviation assets to form a single aviation brigade capable of performing all Army aviation missions, according to USAREUR.