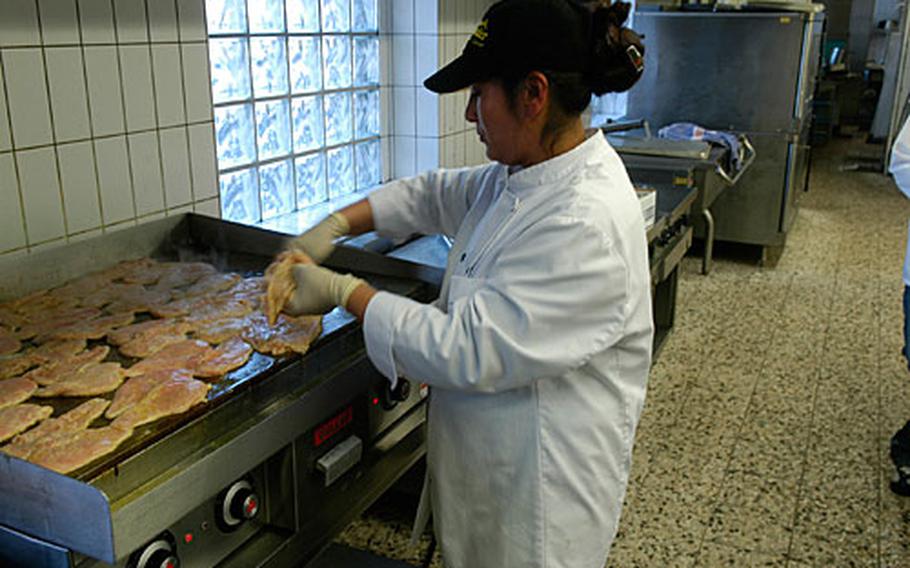 Sita Schneider, who is German, prepares lunch at the Rheinlander Convention Center in Baumholder. Schneider is one of 25 people employed by local business woman Sigrid Zimmer. Zimmer, who manages food services at the Rheinlander and also owns a downtown hotel, relies almost exclusively on the U.S. Army for her business. (John Vandiver / S&S)

BAUMHOLDER, Germany &#8212; The announcement was welcome news, but not exactly the message some local merchants and civilian workers here were hoping to receive.

In 2012, one of the units will relocate to the United States at Fort Bliss, Texas. The following year, the other unit will move to White Sands Missile Range, N.M., though it hasn&#8217;t been determined who goes first.

It remains unclear what the impact will be for the garrisons at Baumholder and Schweinfurt and whether they will immediately shut down at that time. Officials at both garrisons directed questions to U.S. Army Europe.

&#8220;No order or directive concerning their status has been received,&#8221; said Lt. Col. Richard Spiegel, a USAREUR spokesman, responding to questions about when the garrisons would close.

Meanwhile, it also remains uncertain whether an extension for the brigades will translate into infrastructure and quality-of-life improvements at the posts.

For instance, in Baumholder access to high-speed Internet is limited because Deutsche Telecom has declined to expand its infrastructure while the post&#8217;s future is in limbo. The investment is too costly to make without assurances, garrison officials have been repeatedly told.

At Schweinfurt, no closure-related activities took place before this week&#8217;s announcement, so there will be no reversal of any drawdown-type initiatives, Spiegel said.

While Leighton boasts one of the largest post exchanges in Europe as well as a sizable commissary, there is nothing there that Schweinfurt residents can&#8217;t find in their own communities, he said.

Gudrun Grieser, Schweinfurt&#8217;s lord mayor, said in a statement Thursday that he was glad to hear the brigade would be staying for at least a few more years. Aside from the longstanding relationship between the Bavarian town and the Army, Schweinfurt also provides solid training areas and other infrastructure needs, Grieser said in the statement.

Baumholder Mayor Volkmar Pees, who was unavailable for comment Thursday, also has repeatedly lobbied for the Army&#8217;s continued presence in town.

In Baumholder, where the Army is the city&#8217;s economic lifeblood, many residents have been hoping for more than an extension. While the potential for closure has loomed as a possibility for four years now, there has been a growing sense of optimism within the community of roughly 4,500. Indeed, the conventional wisdom around town seems to be that the Army will eventually decide to stay.

Pees has often expressed that hope, which was recently bolstered by the statements of Gen. John Craddock, the top U.S. military commander in Europe, who has called for a halt in the ongoing drawdown of Europe-based troops to the continental United States.

Craddock and other top U.S. commanders in Europe have said in recent months they needed to keep the brigades in Germany for theater security, new missions in Africa and training with allies, including new NATO countries in Eastern Europe.

Gen. David McKiernan, USAREUR commander, also mentioned questions about Kosovo&#8217;s status and a &#8220;resurgent Russia&#8221; as additional good reasons to maintain a presence in Europe. It&#8217;s unclear whether those factors will be less pressing in a few years&#8217; time.

For local business leaders like Zimmer, who also manages food services at the garrison&#8217;s Rheinlander Convention Center, it&#8217;s impossible to imagine Baumholder without its soldiers.

With the announcement that the 1st Infantry Division&#8217;s 2nd Brigade will remain in Schweinfurt, Germany, until at least 2012, plans and changes will likely trickle through the community. The sons and daughters of the &#8220;Dagger Brigade&#8221; are among those already affected.

In particular, high-schoolers will go from being W&#252;rzburg Wolves to Bamberg Barons next school year, with Bamberg High School possibly seeing a doubling of its high school student body as a result.

Bamberg has about 164 students in grades 9-12 this year, while W&#252;rzburg High has about 160 Schweinfurt students, according to Ed Atterberry, the Defense Departments schools assistant superintendent for the Bavaria district.

While the Schweinfurt garrison has its own elementary and middle schools, the Schweinfurt high-schoolers are bused to W&#252;rzburg High School on Leighton Barracks, a 40-minute commute.

The W&#252;rzburg schools are closing at the end of this school year, so the Schweinfurt high-schoolers will be transported to Bamberg High when classes resume this fall.

Going to Bamberg will mean a commute of about an hour and 20 minutes for most Schweinfurt kids, Atterberry said.

Meetings have already been held with school officials to make sure the transition is as seamless as possible next year, he said.

Plans are afoot to host parent-teacher conferences and sporting events at both garrisons, Atterberry said.

The addition of the Schweinfurt students may even bump Bamberg into Division II sports competition next year, he said.

Unless it was somehow fast-tracked, there are no plans to build a high school in Schweinfurt, Atterberry said, as military construction projects are already being planned for 2013.