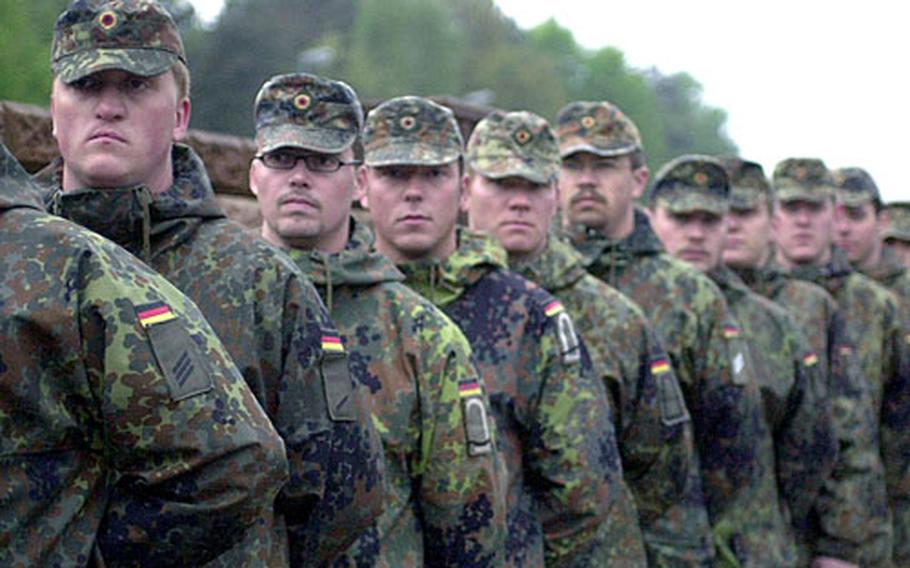 German soldiers stand outside Ramstein Air Base in May 2005. (S&S file photo)

KAISERSLAUTERN, Germany &#8212; German troops will reduce the number of American bases they guard, but continue to man the gates at three U.S. bases for another six months, according to a spokesman for Germany&#8217;s Ministry of Defense.

The German army, or Bundeswehr, will extend guard duty at some bases at the request of the U.S. military, according to the spokesman who did not want to be identified.

The initial agreement between Germany and the U.S. called for the soldiers to stop guarding American military installations 12 months ago, but the timetable was extended twice for some bases.

German troops have helped alleviate the strain on American security forces, which have had to deal with frequent deployments across the globe due to the war on terrorism.

Under a new pact between the countries, German soldiers will continue to guard Ramstein Air Base, Sembach Annex and the George C. Marshall European Center for Security Studies in Garmisch, the spokesman said.

Spangdahlem will hold a ceremony Wednesday to mark the departure of Germany&#8217;s 3rd Company, 1st Naval Infantry Battalion, according to a base news release.

The 52nd Security Forces Squadron will assume control of all base gates at 2 p.m.

The reduction at some bases will bring the number of German soldiers guarding U.S. base gates to 200 with most of them stationed in the Kaiserslautern area. In the beginning, about 4,000 German troops stood guard at American installations.