Germans irked by demands for financial support for US bases 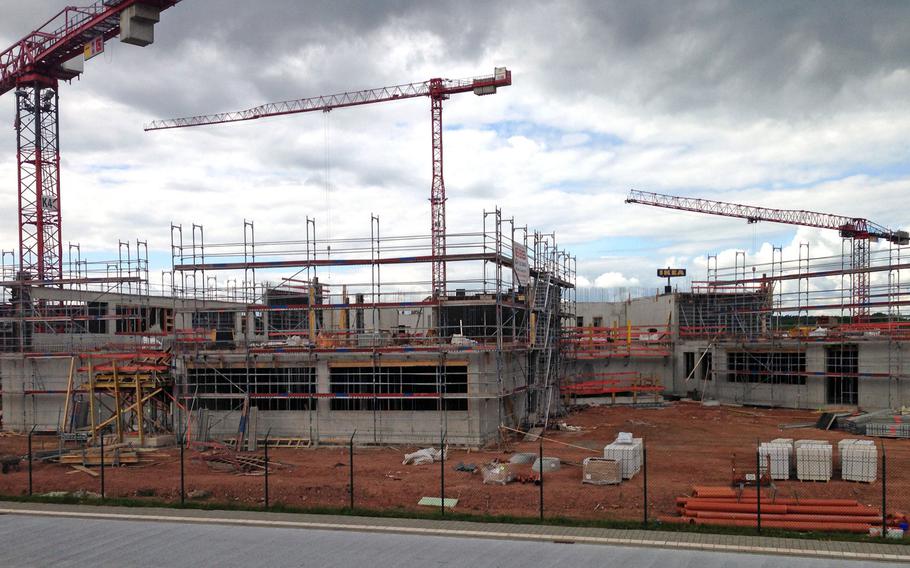 Buy Photo
Construction crews work on the new Kaiserslautern High School in May 2016. Germany helps pay for part of the construction costs for new schools in Germany. President Donald Trump has made allied burden sharing an issue for his administration. (Michael Abrams/Stars and Stripes)

Buy Photo
Construction crews work on the new Kaiserslautern High School in May 2016. Germany helps pay for part of the construction costs for new schools in Germany. President Donald Trump has made allied burden sharing an issue for his administration. (Michael Abrams/Stars and Stripes) 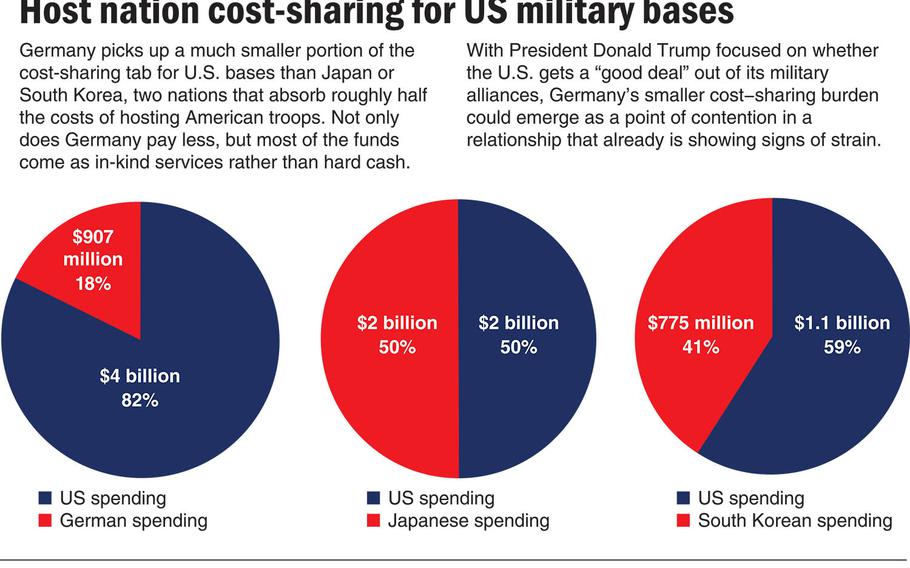 Germany plans to spend about $120 million to help offset the construction costs of several new U.S. schools for American military children in the country, and the locals aren’t pleased.

“If the Americans take the line that they need new high schools here in Germany, they should shoulder the costs,” said German parliamentarian Andreas Ulrich in an interview.

For Ulrich, a left-wing politician who represents residents in the greater Kaiserslautern area — home to 50,000 Americans — German taxpayer support for U.S. bases comes at the cost of doing more for German schools he says are in disrepair. Some constituents are angry and want it to stop, said Ulrich, a member the left-wing Die Linke party.

The amount of Germany’s financial support for U.S. bases in the country is likely to emerge as a flash point for a White House that has made military burden sharing a key factor in how Washington will regard its alliances.

Already the Trump administration is pressuring Germany, which fails to meet NATO’s quota of 2 percent of gross domestic product, to increase its military spending.

A dispute between Washington and Berlin over such matters, some analysts caution, could rupture a post-Cold War order in which a forward U.S. military presence in Europe was regarded as sacrosanct.

Indeed, Germany picks up a much smaller portion of the cost sharing tab for U.S. bases than Japan or South Korea, two nations that absorb roughly half the costs of hosting a large presence of American troops.

Not only does Germany pay less — about $1 billion, or 18 percent of the overall cost — most of the funds come in the form of in-kind services rather than hard cash, according to a 2013 analysis by the Rand Corp. With President Trump focused on whether the U.S. gets a “good deal” out of its military alliances, Germany’s smaller cost-sharing burden complicates a relationship already showing signs of strain.

“We protect Germany,” Trump said in a 2016 interview with CNN. “They pay us practically nothing. They are a behemoth economically. They have tremendous money.”

Europe, and Germany in particular, has taken note as concern grows that Trump’s overtures to Moscow could challenge unity inside NATO and call into question a reliable U.S. military presence on the Continent.

“I think Germany does see the writing on the wall and realizes this is a new situation,” said Hans Kundnani, an expert on trans-Atlantic relations with the German Marshall Fund of the United States. “But while I can imagine Germany doing a little more than it did in the past, I worry that it is fighting the last war. It might do some things that would have satisfied Obama, but not Trump.”

So far, German politicians have reacted with concern, mild defiance and signaled no indication they are ready to appease Trump on issues like massive military spending increases or increased payments to Washington.

“This man is deadly serious. We must be neither submissive or afraid,” said Sigmar Gabriel, Germany’s new foreign minister and member of Social Democratic Party, in a post-election interview with Deutsche Welle.

German Chancellor Angela Merkel, and her potential opponent in elections later this year, Social Democrat Martin Schulz, also have been critical of Trump, saying his criticisms are a sign that Europeans must unite.

“We have to respect the elected president of the United States as he deserves, but at the same time he has to treat his partners with the respect they deserve,” Schultz told Deutsche Welle.

Trump has already floated the idea of tariffs on certain German products, and analysts say the president could at be willing to reconsider how U.S. forces are deployed if he were unsatisfied by burden-sharing deals.

”On the security free-rider accusation, Germany is the biggest culprit because of its size,” said Kundnani. “For years they thought they could get away with it. They didn’t realize someone might come along who will call their bluff.”

The American Action Forum, a Washington think tank, said in a November report that Germany’s payments to U.S. military facilities are almost entirely in kind — the provision of services or facilities.

A possible reason that Germany shares a smaller share of the burden than Pacific allies in the Pacific is that Germany sees little immediate threat to its own security, unlike countries neighboring North Korea and China. Berlin may balk at demands to spend on U.S. bases even in light of Russia’s more assertive military posture.

Many Germans oppose paying more for the U.S. bases because they see them as primarily serving Washington’s foreign policy interests. Ramstein Air Base, for example, has been been used as vital staging posts for the U.S. military interventions in Iraq and Libya, which Berlin either opposed or did not participate in.

Rachel Hoff, a security analyst with the conservative America Action Forum, said the Pentagon would have to explain the role of U.S. forces abroad to an administration that has expressed skepticism about the Europe mission.

Bases in Germany serve as a platform for the projection of US power and influence across the region, she said. They also serve as hubs for coordinating operations with allies.

If the U.S. could not use its airfields in Germany for deployments to the war in Afghanistan, refueling aircraft would cost significantly more, Hoff said.

Germany, more than major allies such as France and Britain, is in a difficult position if confronted with Trump arm twisting for more payments, given the country’s dependence on the U.S. markets for exports and a defense policy that relies on American muscle.

“Germany depends on a very particular form of liberal order,” Kundnani said. “Just as Germany has been criticized for free riding on security, it has been accused of economic free riDing with the U.S. as the consumer of last resort.”

If Trump wants more, there will be opposition from the likes of Ulrich, the German parliamentarian, who says his country already pays too much.

UIrich said he has some cost saving advice for Trump: “Move your nuclear bombs from the Eifel (region of Germany), review if every war really is necessary.”

While such sentiments are commonplace among Germany’s political left, across the political spectrum there has been little appetite over the years for expanding the country’s own military or paying a larger chunk of the bill for keeping American troops on its soil.

Of the U.S., “We are not talking about a Third World country here,” Ulrich said.