Germans in Mainz gape at 'Hollywood on the Rhine' 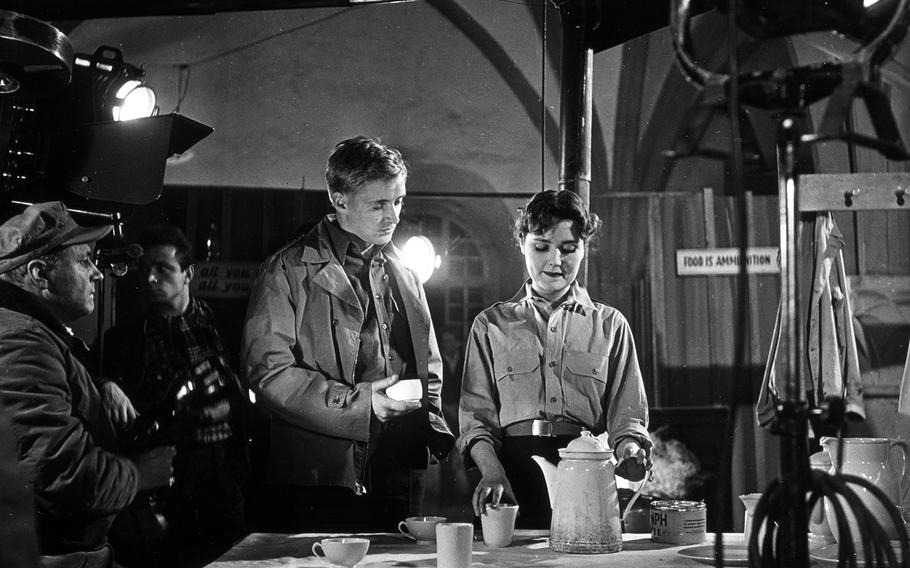 Buy Photo
Oskar Werner and Dominique Blanchar on the set of what was then being called "Legion of the Damned," in West Germany in 1950. (Stars and Stripes)

Buy Photo
Oskar Werner and Dominique Blanchar on the set of what was then being called "Legion of the Damned," in West Germany in 1950. (Stars and Stripes) 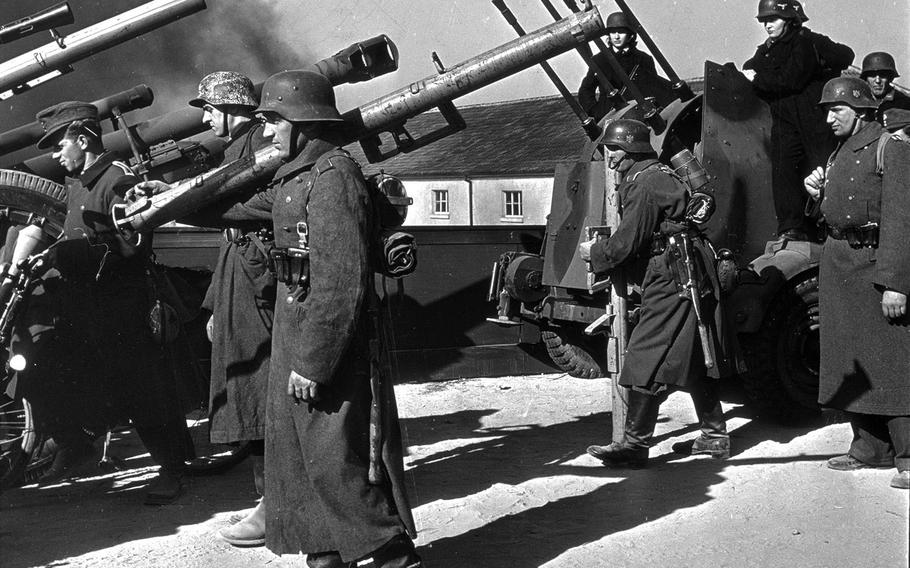 Buy Photo
In a "Decision Before Dawn" battle scene on the Rhine at Mannheim in 1950, German extras in uniforms of the Wehrmacht cross the bridge under heavy fire from advancing 7th Army troops. Note the German ack-ack gun. (Stars and Stripes) 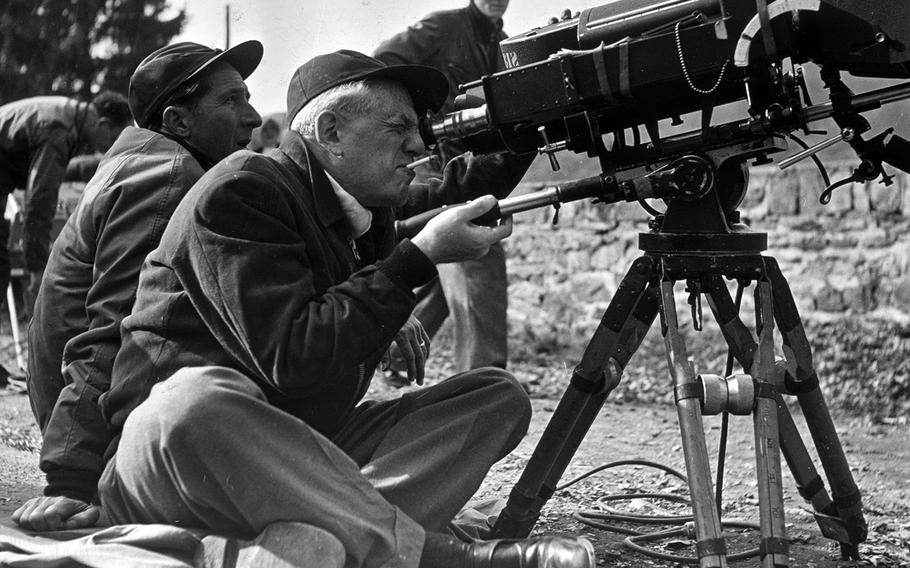 Buy Photo
Producer-director Anatole Litvak squints through the camera at a "Decision Before Dawn" scene photographed at the approaches to the Rhine bridge at Mannheim in 1950. (Stars and Stripes)

GERMANS in the streets of Mainz halted and gaped unbelievingly as a page from the past —a column of green-uniformed Wehrmacht troops, toting burp guns, Mauser rifles and field packs — hove into view around a corner.

Rumbling along beside the troops was an armored column of camouflaged halftracks, self-propelled guns and tanks marked with the German cross.

The startled Germans gaped even more when a tanker clad in panzer uniform popped out of the turret of his machine and yelled in English to a buddy in the vehicle behind:

"Hey, Jughead, do you think we'll get through with this in time to get to the football game Saturday?"

The panzer tanker was one of the EUCOM soldiers taking part in the filming of producer-director Anatole Litvak's new war movie, "Legion of the Damned," now being shot on location in Germany.

This particular GI was only one of the extras being used in the movie, but 17 others from the EC — chosen as the EC's top actors in a zonewide talent hunt sponsored by Special Services — are filling speaking parts. Several have been assigned major supporting roles.

The movie, based on George Howe's book, "Call It Treason," tells the story of an OSS unit which returns willing German prisoners of war to their own country-as spies. It focuses on the adventures of one idealistic young German who returns to his homeland as an American spy because he believes Germany will never be free until it is defeated.

Oskar Werner, a young Viennese actor with 50 plays and seven movies behind him, portrays the role of the spy. He was signed to a long-term contract with 20th Century-Fox, makers of the film.

The other male leads are played by two Hollywood actors. Richard Basehart and Gary Merrill, The latter made a hit with EC audiences as Col Davenport in "12 O'Clock High" and was recently married in Mexico to actress Bette Davis.

Most of the extras — including the Wehrmacht troops who startled passers-by in Mainz — are Germans supplied by a casting agency.

The film is being shot in Germany, with inside sequences to be filmed in a Munich studio. Shooting is to be completed in December, and a tentative release date has been set for next summer.

Litvak, who made the 1948 Academy Award contender, "The Snake Pit," is a frosty-haired dynamo with a warm smile. His kindness and patience have won the devotion of the 17 EC actors appearing in the film, He is also a stickler for realism, and re-creating a miniature Wehrmacht provided a potpourri of problems.

In casting about for usable German weapons and war vehicles, 20th Century-Fox found that the U.S. and British armies had destroyed their captured weapons. The thrifty French, however, had trundled theirs across the border intact. Their foresight Is now paying off.

German army trucks, half-tracks, 88-MM guns, howitzers and flak guns are being rented from the French.

A few German tanks also were available, but without spare parts. Rather than struggle with maintenance problems, Litvak borrowed U.S. tanks, complete with crews, from EUCOM forces.

Turrets on Pershing tanks have been turned around, and they are being driven backwards in the movie sequences so that their silhouettes will more closely resemble the outlines of their German counterparts, and false panels have been fitted on to complete the deception. Crews are Constab tankers.

Another problem was uniforms.

A study of Allied occupation ordinances disclosed Germans were forbidden to wear military uniforms, but were permitted to keep them. Newspaper ads brought responses from 1,600 veterans with uniforms. Of these, about 600 were purchased for "Legion of the Damned."

For refugee scenes, the company purchased a small mountain of assorted rucksacks, handbags and suitcases from German shops. But they were new — too new, it was decided, to look authentic.

So a crew loaded down with the new baggage was turned loose on the streets. They approached any Germans they saw carrying bags and offered them new baggage for old. That solved another problem.

Litvak's rolling film company — a convoy of about 20 trucks — has shot scenes In Nurnberg, Wurzburg, Ludwigshafen. Mannheim and Mainz. Future locations are Munich, Garmisch, Erding (where a mass parachute jump will be filmed), the medieval town of Rothenburg and the Odenwald town of Maulbron.

"It's like a circus," Litvak explained. "We move fromm town to town, shooting a day or two in each place, Some of the German extras haven't ever seen a movie camera before. I think some of them haven't even seen a movie, and there are problems

"This is an experiment, but it's going very well."

A throng of Germans always gathers to watch whenever the caravan halts and magically transforms some remote street corner or building into the well-organized pandemonium that is a Hollywood movie set — klieg lights, sound booms, props and a small army of players, technicians, press agents and hangers-on.

It's all quite a show also for the 17 EC actors, who have been placed on temporary duty while appearing in the film. Under military regulations, they can receive no pay for their work, although it has evoked praise from Litvak.

"I think they're wonderful," the Russian-born director said. "I'd like to take some of them back to the States with me, if I only could."

The boys have fallen quickly into the Hollywood idiom. Recently, after a scene at the Eberbach Cloister, near the Rhine River outside of Wiesbaden, they held an impromptu critique for Sgt Harold Benedict, of Furstenfeldbruck Air Base Special Services.

"That was a big line you had in that scene," mocked Sfc Louis Cook, of AFN Frankfurt. (The line was a cryptic "Yeah," in answer to a question by Richard Basehart.)

"I worked on it for three weeks," shot back Benedict, who captured a major supporting role in the movie, "Wasn't much way to get cute with it though."

"But," mused 1st Lt Clarence A. Amos, of the 18th Weather Sq, "there must have been SOME way you could have stolen that scene."