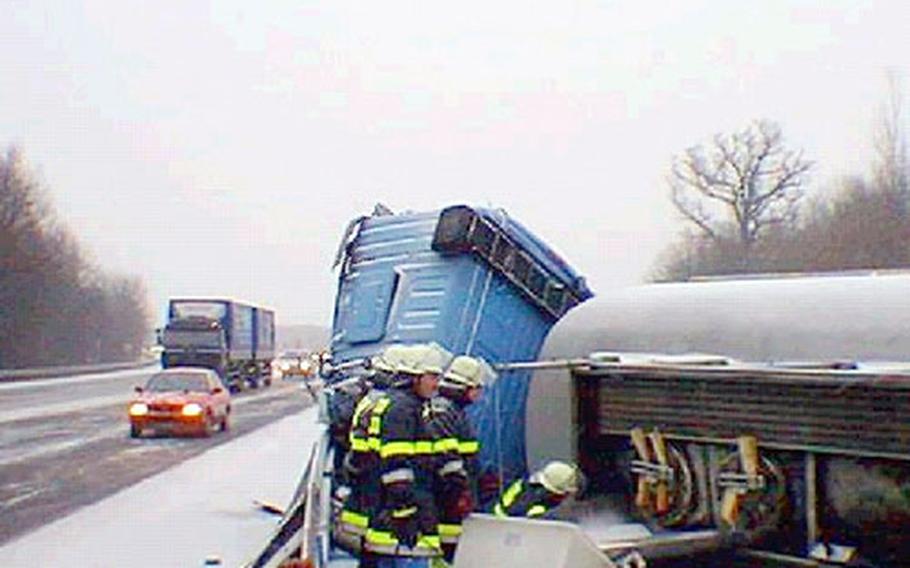 Emergency workers examine an overturned truck on autobahn A3 following a traffic accident on the snowy morning of Jan. 13. Before the accident, an Army Humvee had slowed as it encountered a traffic jam. The Humvee skidded and jackknifed. About 45 minutes later, the German tanker truck carrying diesel fuel hit the Army trailer and overturned. (Courtesy of U.S. Army)

KITZINGEN, Germany &#8212; U.S. military police and German police have found that German drivers were responsible for two of the three accidents that snarled traffic on the snowy A3 autobahn near W&#252;rzburg on Jan. 13.

The first crash occurred about 12:50 a.m. near the Dettelbach bridge northwest of Kitzingen when a German semi-trailer truck driver struck a 5-ton Army truck that was being towed by a wrecker from the 16th Engineer Battalion in Giessen.

The semi-trailer struck the median, spilling diesel fuel and 10 tons of auto parts on the road, halting eastbound traffic for more than 10 hours.

Two soldiers in the wrecker weren&#8217;t injured, and the truck driver suffered only minor injuries, although he was briefly trapped in the cab of his truck.

The German driver ultimately was held responsible for the crash, said Maj. David Lewis, provost marshal for the Kitzingen-based 417th Base Support Battalion.

In the second accident, which happened about 7 a.m., an eastbound Army Humvee from the Darmstadt-based 32nd Signal Battalion slowed as it encountered the traffic jam from the first accident. The Humvee skidded and jackknifed in the fast-accumulating snow, its trailer overturning on the A3 at the A7 autobahn exit.

The two soldiers in the cab secured the area with traffic cones and waited for help. But about 45 minutes later, a German tanker truck carrying diesel fuel hit the trailer and overturned.

No one was injured and traffic was diverted from the autobahn, but still it backed up another five miles. In this accident, too, the truck driver was charged with inattentive driving, Lewis said. The soldiers later proceeded to Grafenw&#246;hr, where they were heading to participate in the Victory Scrimmage exercise.

The third crash took place about 11:30 a.m., also on the A3 autobahn eastbound near the Heidingsfeld exit south of W&#252;rzburg. A Humvee utility truck from the 141st Signal Battalion in Wiesbaden applied its brakes, again in heavy snow.

The brakes locked, and the Humvee skidded into a passing car. Then a German semi-trailer truck struck the Humvee from behind, causing a pileup that left 39 vehicles strewn across the highway. Traffic backed up 14 miles, and police spent four hours clearing up the mess.

Seven people were injured, including the Humvee driver, who suffered bruises. The Humvee driver also was cited for failing to properly control the vehicle.

Some media reports had blamed Army drivers in all the accidents, saying their vehicles aren&#8217;t properly equipped for winter weather.