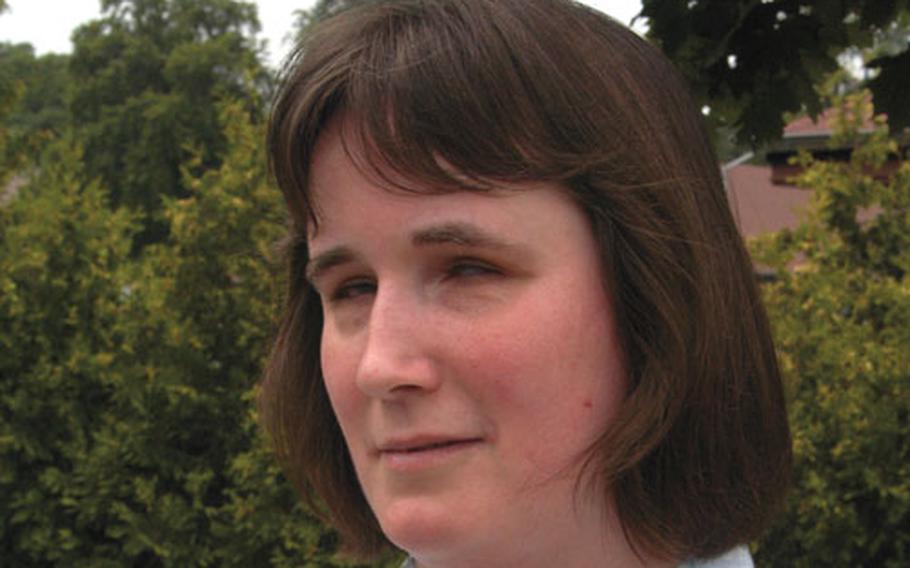 Martina Bechtold, a 38-year-old German woman, is trying to find the man she was told was her father — an American GI once stationed in Karlsruhe, Germany. (Matt Millham / S&S)

Martina Bechtold never met her father, and never believed she would.

At an early age, Bechtold was told he had been killed in Vietnam.

Now, however, the 38-year-old resident of Darmstadt, Germany, has her doubts.

A few years ago, she began searching for information about the man she believed to be her father, a U.S. serviceman named Charles Livingston who had been stationed in Karlsruhe, Germany, in the late 1960s.

Friends helped Bechtold, who has been blind since birth, in her computerized hunt. They went to several Web sites, including ones with U.S. government data.

Soon after they began, one friend discovered that Livingston didn&#8217;t die in Vietnam.

But Livingston&#8217;s name isn&#8217;t on the Vietnam War Memorial in Washington, D.C., nor is he listed as missing in action or as a prisoner of war.

He has, by all appearances, fallen off the face of the Earth.

Bechtold isn&#8217;t the first person to be baffled by a vanishing father. She is one of an estimated 100,000 children of U.S. servicemen who were stationed briefly in Germany and left everything behind when they departed &#8212; including their children.

When these children &#8212; many now adults &#8212; decide to find their fathers, they often have a hard time doing so. But it&#8217;s not just because their fathers are elusive. Most struggle to get information from their mothers, said Stefan Starina, who works for GI-Kinder Charity, an organization that helps people like Bechtold find their fathers.

&#8220;It is up to them to provide their children the fact that their fathers are American GIs &#8230; it mostly requires a dramatic situation to release the information,&#8221; Starina wrote in an e-mail response to Stars and Stripes.

Such is the case of the charity&#8217;s founder, Norbert Alexiou.

Alexiou was 16 when his mother, stricken with cancer, was close to death. She told him that his real father was an American GI who had been stationed in Darmstadt after World War II.

Alexiou&#8217;s mother recovered, and years later he begged her for any information that might help him find his father. After much deliberation, she acquiesced.

&#8220;Mothers may underestimate the significance for their children to know the truth about their real existence,&#8221; Starina wrote.

He added that often it&#8217;s the mother&#8217;s embarrassment that causes her to withhold information from her child.

Alexiou&#8217;s mother was embarrassed to admit that while she was married she&#8217;d had an affair with an U.S. serviceman who was also married.

Bechtold believes her mother, Sibylle Bechtold-Schaefer, might also be embarrassed about her past.

But the relationship continued, and soon after Bechtold-Schaefer became pregnant by Livingston, he was sent to Vietnam.

It seems that Bechtold&#8217;s mother tried to erase Livingston from her life before his supposed death. Livingston, Bechtold said, isn&#8217;t even listed on her birth certificate &#8212; no one, in fact, is listed as her father.

Bechtold&#8217;s mother has gotten rid of or hidden all the letters she got from Livingston, and she&#8217;s refused to help her daughter find her father.

She has since turned to Family International Frankfurt, an organization similar to the GI-Kinder Charity, for help. She doesn&#8217;t know her father&#8217;s hometown, his service number or his Social Security number. Just his name. She hopes that&#8217;s enough to find him.

It might be, but it probably won&#8217;t be easy. Even with his mother&#8217;s help, it took Alexiou eight years to find his real father.