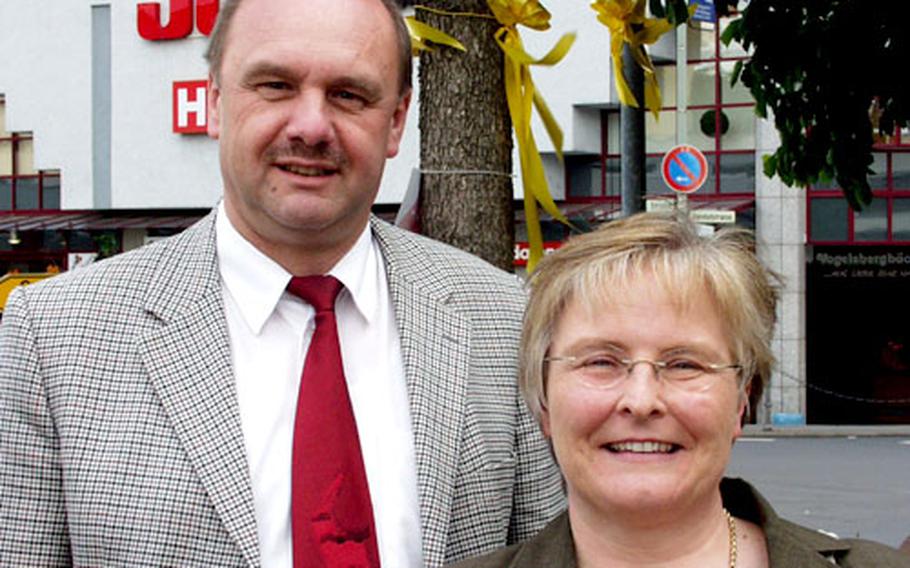 Büdingen officials tied about 150 yellow ribbons to trees last week on news that an advance team of 1st Cavalry Regiment troops was returning to its home base after more than a year away. Leading the effort was Manfred Hix, the deputy mayor, and Claudia Trupp, a local tourism official. (Kevin Dougherty / S&S)

B&#252;DINGEN, Germany &#8212; When word started to spread last week that a small advance team of 1st Cavalry Regiment troops was leaving Iraq for the friendly confines of Armstrong Barracks, Claudia Trupp knew it was knot time.

So Trupp, a German who works in B&#252;dingen, drove out of her way that day to buy more than 1,600 feet of yellow ribbon, and then spent the night with four other volunteers making bows for the Joes heading home. By noon the next day, about 150 ribbons adorned parts of downtown B&#252;dingen, from trees to an old castle gate.

Ties run deep between this city of 9,000 people and the 1st Squadron, 1st Cavalry Regiment of the 1st Armored Division. About 2,000 Americans live in the community, according to Wolfgang Niebling, a 414th Base Support Battalion spokesman.

German officials, residents and shopkeepers go out of their way to make their American guests feel at home. In return, Americans are heavily involved in community activities, and have been for nearly 60 years.

Two years ago, when a flood threatened the old city center and its historic walls and gate, about 50 U.S. soldiers volunteered in the dead of night to help local crews fill sandbags and stem the rising water. They succeeded, and were later lauded by the mayor for their efforts.

The yellow ribbons that went up last Thursday &#8220;are a sign of the true friendship we have here&#8221; with the Americans, Hix said this week over a cup of coffee in the city center.

Yellow ribbons have become synonymous in the United States with hope, loyalty and a safe return, something Hix and Trupp are well aware of.

The idea to dress up B&#252;dingen arose this past winter, they said, so when Lt. Col. Amy Ehmann, the commander of the 414th Base Support Battalion, informed city officials that an advance team would soon return from Iraq to pave the way for the rest of the squadron, Trupp went ribbon shopping.

For security purposes, Army officials are being cautious about what they say about returning troops. The expectation is that most, if not all, of the 1st Cavalry &#8212; as well as the 1st Armored Division &#8212; will be home by late July or early August.