German teens get a glimpse of life at a U.S. high school 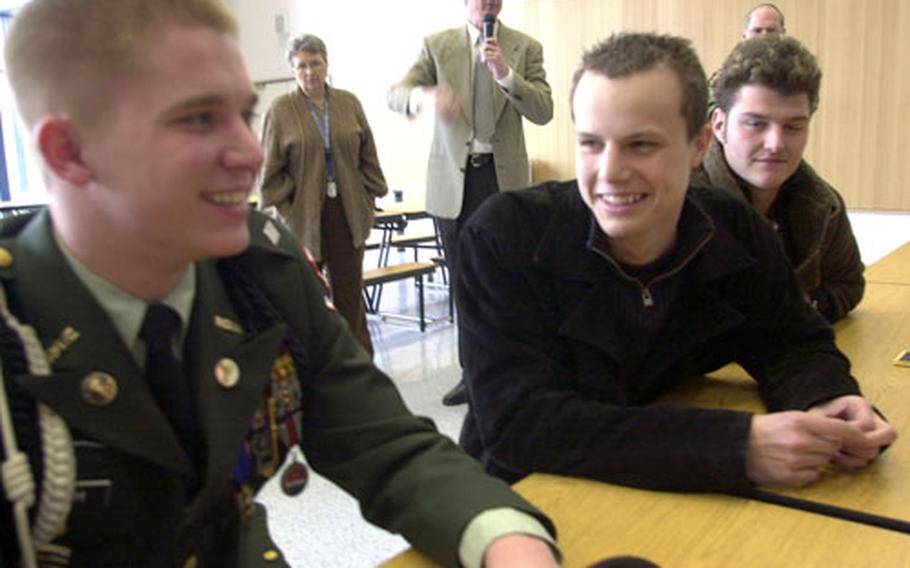 HOHENFELS, Germany &#8212; German teenagers got a crash course in life at a U.S. high school during a visit to Hohenfels on Wednesday.

Members of the school council told the Germans about the prom and the council&#8217;s role in resolving issues over inappropriate behavior and dress at school dances.

President of the Future Business Leaders of America, Chris Tsesmlis, 18, told the Germans about his group&#8217;s accounting skills and the chance to network with business leaders.

The young entrepreneur said he was already on good terms with his German neighbor, Stephan, also 18, whom he had known for seven months. The pair often talk politics and play a lot of sports, he said.

The Junior ROTC battalion commander, Patrick Smith, 17, told them about the school&#8217;s drill and shooting teams and the chain of command. The Germans also learned about the Raiders &#8212; a sort of ROTC Special Forces &#8212; that go on ski, hiking and kayak trips.

Baseball captain Wes Arnold, 18, told the Germans about the numerous athletic activities at the school including football, cross-country, basketball, cheerleading, soccer, and track and field.

&#8220;Some off-post soccer clubs only practice once a week. Here we practice five days a week with games at the weekend,&#8221; he said.

Parsberg student Philipp Setzer said there was no sport at his school.

&#8220;We do sports outside school. I play football for my village team at Batzhauzen,&#8221; said the 19-year-old, who was seeing an American high school for the first time.

Another Parsberg student, Isabella Kratzer, 17, said she spent a year at a U.S. high school in Buffalo, N.Y., adding that U.S. schools were different from German schools.

&#8220;The class programs are different. Here (in Germany) we get a fixed program and there (at U.S. schools) you can pick your classes &#8212; I did media studies and public speaking. There is a lot more emphasis on sports, and American kids are very outgoing. I think they are very interested when somebody new comes,&#8221; she said.

Hohenfels High School Assistant Principal Dave Carlisle said the Association of the U.S. Army-sponsored exchange was designed to be educational. The U.S. students will visit the German school later this year, and both groups might read the same novel and discuss it, he said.