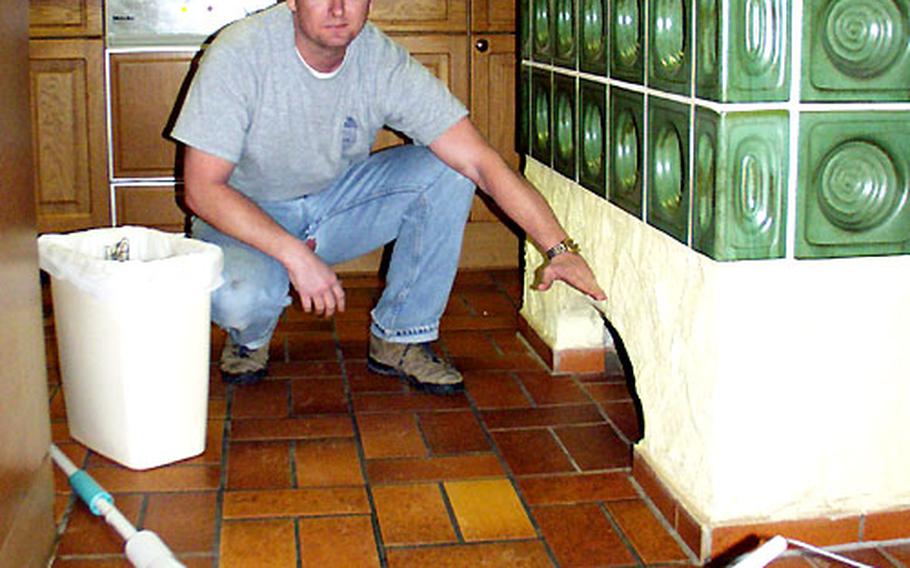 Marc Smith, a special agent with the Army’s Criminal Investigation Division, shows how high flood waters rose in the kitchen of his family’s home in Sulzfeld, Germany, last weekend. Smith and his wife, Jeri Lusk, were able to move most of their furniture and possessions upstairs before the Main River — normally more than 100 yards away — reached their doorstep. (Steve Liewer / S&S)

SULZFELD, Germany &#8212; Most of the time, the Main River flows lazily through Sulzfeld, a distant view across the fields from Marc Smith and Jeri Lusk&#8217;s bedroom window.

Last Saturday, though, the river swelled to a torrent and turned into unwanted houseguest. It covered the cobblestone road in front of their house, topped a small sandbag barrier on their front porch, and filled the first floor of their two-story apartment to about six inches deep.

Smith and Lusk, who are married and work at Harvey Barracks in nearby Kitzingen, are among hundreds of families along the Main River who have spent the last few days scrubbing muck and mud and sewage out of their houses following weekend floods.

By Wednesday, nearly all roads around Kitzingen and W&#252;rzburg had reopened as the Main returned to its banks. The flood waters crested Sunday evening about 6 p.m., but the cold snap that followed last week&#8217;s storms turned some swales and meadows into sheets of ice. Dikes and sandbags and portable pumps prevented more serious damage in what local officials called the worst flooding since 1970.

In Kitzingen, the waters reached 4.6 meters &#8212; about 15 feet &#8212; more than 2 meters higher than normal, said Georg Schwarz, a city supervisor. He said city workers, police and firefighters were on alert from Friday through Tuesday, and now are trying to cope with dangerous ice left behind along the city&#8217;s waterfront promenade.

The river rose Saturday with little warning. The rains of Thursday and Friday did not seem especially heavy, but the Main and other rivers in northern Bavaria already were running full after a wet fall.

Still, they didn&#8217;t worry much. In their 2&#189; years in Sulzfeld, a walled village about two miles south of Kitzingen, they had seen the water cross the fields, a parking lot, a road and even lap at the medieval wall across the street from them. But their German neighbors reassured them the water never would come inside the wall.

On Saturday evening, though, the first trickles of water came through the city gate and onto the cobblestone street in front of their house. Some neighbors stacked sandbags in front of their porch, and Smith and Lusk started hauling furniture from their first-floor living room and kitchen into the two bedrooms upstairs. But they didn&#8217;t have enough space to empty a storage room packed floor-to-ceiling with boxes and spare furniture.

That night, Smith set his alarm for 2 a.m. to check on his car. He woke up to find water as high as the top of the wheels, but he was able to start the car and move it up the hill. Early the next morning, they and their 9-year-old son, Kenny, packed up and left to stay with some friends.

Smith visited Sunday night and found the brown broth six inches deep. A German neighbor, unasked, pumped water out of the house all night. In fact, as the flood receded, Smith and Lusk met friends they never knew they had. After they returned Tuesday, a stream of Sulzfelders &#8212; some of whom were cleaning mud from their own homes &#8212; stopped by to offer food and assistance.

On Monday, Smith and Lusk contacted the 417th Base Support Battalion&#8217;s housing office, thinking they would need to move immediately. But after cleaning up Tuesday, they think they&#8217;ll be able to stay for the rest of their tour, which ends in July.

Their landlord lacks flood insurance, so they are waiting to see how quickly he fixes the warped wooden paneling and other storm damage. Luckily they had renter&#8217;s insurance, which will cover about $1,000 in damages, including two carpets, a set of bunk beds and numerous personal items they couldn&#8217;t remove from their storage room.

Both their commands &#8212; Smith works for the Army&#8217;s Criminal Investigation Division; Lusk for the BSB&#8217;s director of community activities &#8212; have been generous in giving them time off to clean up. Neither they nor the BSB knew for certain how many other Americans in the Kitzingen area had been forced from their houses by the worst floods in 30 years.

Peter Jaeger contributed to this report.