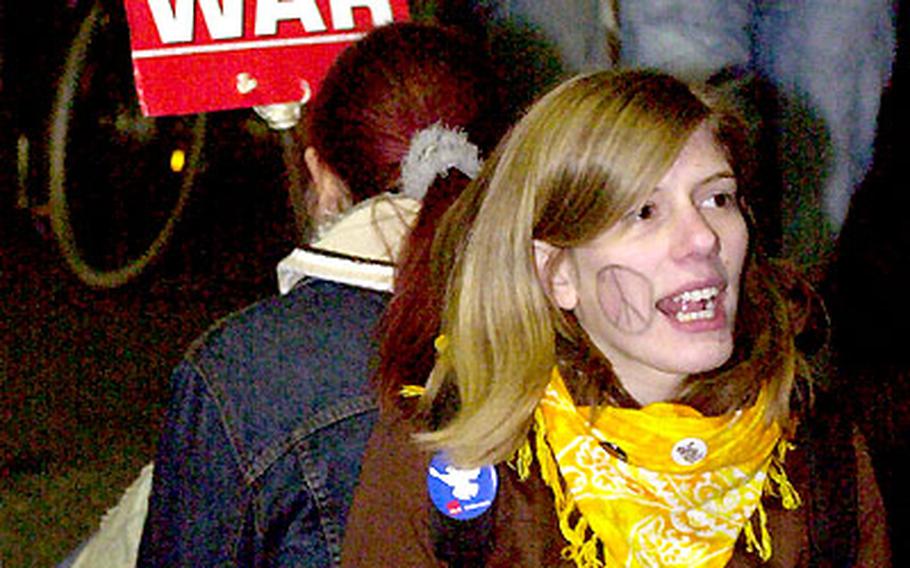 HEIDELBERG, Germany &#8212; As U.S. troops wage war against Iraq, Germans appear determined to make their voices heard to Americans on bases in Europe.

Some U.S. family members &#8212; focused on news from the front &#8212; said they do not understand why protests continue or what exactly the demonstrators are saying.

About 5,000 anti-war protesters demonstrated in Heidelberg on what locals called &#8220;X-Day&#8221; &#8212; the beginning of hostilities in Iraq &#8212; by staging rallies Thursday night outside the headquarters of U.S. Army Europe and V Corps at Campbell Barracks.

Peering from windows and doorways, soldiers and family members watched cautiously. Others ventured onto street corners trying to understand much of the anti-war rhetoric &#8212; spoken mostly in German.

A few blocks away, peace activists took turns berating President Bush&#8217;s administration through an amplified microphone. Signs were often doubled-sided with English slogans on the back.

Brigit Wilson, a German native married to a U.S. soldier, understands the protesters perfectly. Yet she often feels torn between supporting her husband and the overwhelming anti-war sentiment of the German population. Some Americans on base hear her German accent, and give her the cold shoulder, Wilson said. On the other hand, her German friends question the war.

Next to Wilson, Myong May held her pug, named Lucky, as her son, Abel, stood on top of a utility box for a better look. In recent weeks, several large protests passed by her housing area to the front gates of Campbell Barracks. May, a native of South Korea, never saw such a large protest as the one Thursday night, she said.

Students sat in a circle in the middle of R&#246;merstrasse blaring the Jimi Hendrix version of the &#8220;Star Spangled Banner.&#8221; Blocks away, several conga drums echoed down the thoroughfare. Outside the headquarters, thousands of protesters packed the streets, waving signs, torches, and banners &#8212; chanting anti-Bush sentiments in German.

Earlier Thursday, about 300 students blockaded access to the housing area by sitting in the road for nearly four hours. Students also lobbed everything from eggs and sandwiches to pens and pencils at soldiers nearby.

No one was struck, both U.S. and German officials said.

May asks herself why Germans would still protest now that the war was under way, she said.