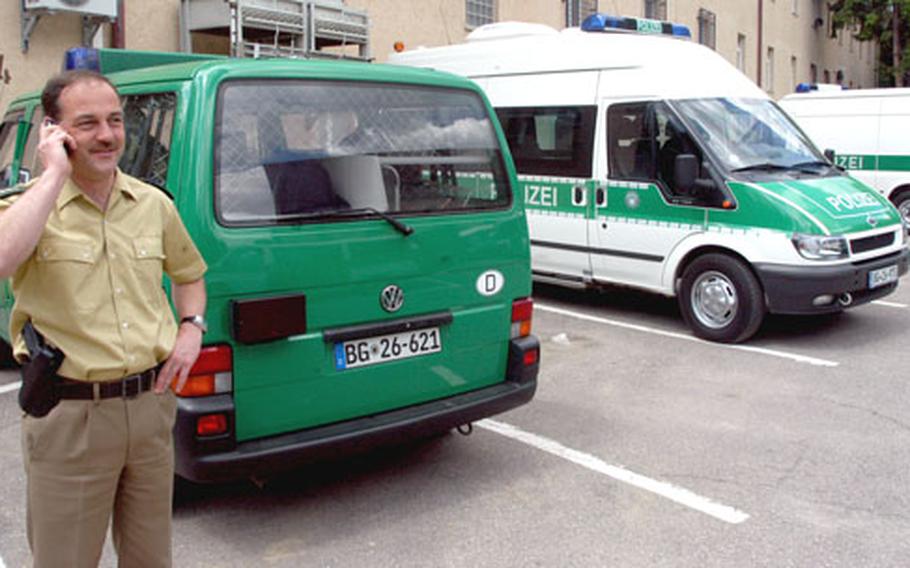 Capt. Bernd Jennert of the German federal police will help lead a battalion of 300 officers brought to Stuttgart, Germany, to provide extra security for the World Cup soccer tournament. Jennert’s officers will be staying at Kelley Barracks. (Charlie Coon / S&S)

Capt. Bernd Jennert of the German federal police will help lead a battalion of 300 officers brought to Stuttgart, Germany, to provide extra security for the World Cup soccer tournament. Jennert’s officers will be staying at Kelley Barracks. (Charlie Coon / S&S) 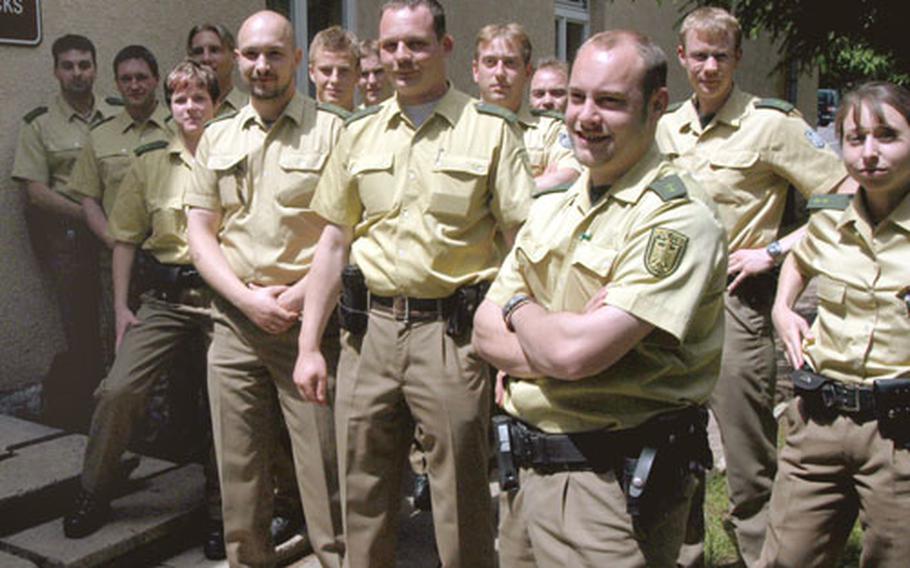 Some of the 300 German federal police officers who are staying at Kelley Barracks in Stuttgart. (Charlie Coon / S&S)

STUTTGART, Germany &#8212; They&#8217;re not expecting major trouble, but the German police are ready.

Jennert is part of a task force of 300 officers from the German federal police that has moved into Kelley Barracks, ready to augment security for the World Cup soccer tournament, which started Friday.

The Polizei, who are from the eastern Bavaria town of Deggendorf, were invited to stay at the U.S. Army installation after local German police officials asked the garrison for help.

The commander of U.S. Army Garrison Stuttgart, Army Col. Kenneth G. Juergens, endorsed the idea to his bosses and eventually got the go-ahead. &#8220;[Juergens] said that assisting the Polizei would only enhance the working relationship between the German and U.S. military communities,&#8221; said Jennifer Sanders, a garrison spokeswoman.

The officers are used to traveling to soccer games and other events to provide security. The housing at Kelley, Jennert said, is unusually accommodating. Only two officers are housed in each room.

&#8220;We&#8217;ve had problems to find German installations where so many men and women could find dwelling for five or six weeks,&#8221; Jennert said.

&#8220;This was really a friendly gesture of the Army to give us the ability to live here. Usually, the best we can get is a small hotel.&#8221;

On Wednesday, officers were moving into three unused barracks buildings. German and Bavaria state flags were hung on some walls.

They also fired up the base dining facility that had closed several years ago. The unit brought kitchen equipment and supplies, as well as the staff that usually works in the Deggendorf kitchen.

The officers have even painted and repaired some of the buildings they&#8217;ll be using. Sgts. Marco Huettle and Marco Ecker just smiled when asked if they were scared about potential danger at the World Cup. &#8220;It&#8217;s only the same as normal at a soccer game, but larger,&#8221; Huettle said. &#8220;And we have many officers here, good colleagues,&#8221; added Ecker.

While the main job is to assist the local Stuttgart police, that could change. &#8220;If we are needed anywhere in Germany, we will go,&#8221; Huettle said.

Jennert said his unit could be increased from 300 to 500 officers if necessary. One scenario that could trigger a call for more police would be if, for example, Germany plays England in Stuttgart in the second round, which is possible.

Jennert said that World Cup security is being provided only by police, and that the Germany army, or for that matter the U.S. Army, are not involved. He said German police were working closely with police from neighboring nations, many who have traveled to Germany to help their police brethren at the tournament.

Jennert said that if mass arrests happened in Stuttgart, the prisoners would not be kept at U.S. installations. &#8220;The (police in Stuttgart) have a special location,&#8221; Jennert said. &#8220;They are prepared for more than five or 10 prisoners.&#8221;