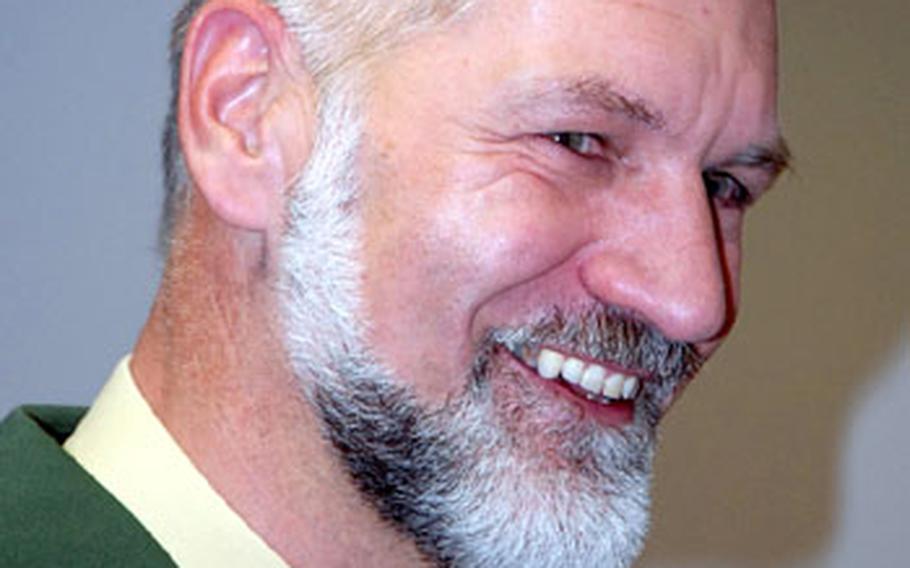 Polizeihauptmeister Gerhard Männer, a member of the German police, is being stationed on Rose Barracks in Vilseck, Germany, to act as a liaison between the German police and members of the U.S. military community in U.S. Army Garrison Grafenwöhr. (Mark St.Clair / S&S)

VILSECK, Germany &#8212; A German police officer has been stationed for the first time at the Rose Barracks Provost Marshal&#8217;s Office in Vilseck.

In response to the growing military community in the U.S. Army Garrison Grafenw&#246;hr area, Army and local Polizei officials decided to place the officer on base to act as a liaison between the two organizations.

After a short ceremony officially welcoming him to his new office on Wednesday, Polizeihauptmeister Gerhard M&#228;nner talked about his new position.

M&#228;nner added that because he&#8217;s a Vilseck resident, the location also appealed to him.

USAG Grafenw&#246;hr commander Col. Brian T. Boyle and German police officials said the increase in U.S. personnel in recent months was the main catalyst for adding M&#228;nner to the staff.

Last year&#8217;s addition of the 2nd Stryker Cavalry Regiment to Vilseck, coupled with space issues in the local MP stations, made Rose Barracks the best fit for M&#228;nner, said Maj. Robert Ray, director of emergency services for the garrison.

&#8220;This is not a reaction to some action that occurred before,&#8221; Ray said. &#8220;We have a very positive relationship (with the Polizei) right now. [M&#228;nner] will be able to facilitate the communication process and facilitate the paperwork process.

&#8220;Crime affects everybody. To have an officer in our station to help facilitate information flow between agencies and to provide quality service to the community &#8230; this is a positive thing for everyone involved.&#8221;

Although he was officially welcomed Wednesday, M&#228;nner has been working on Rose Barracks for more than a month. So far he has spent much of his time dealing with unpaid speeding tickets.