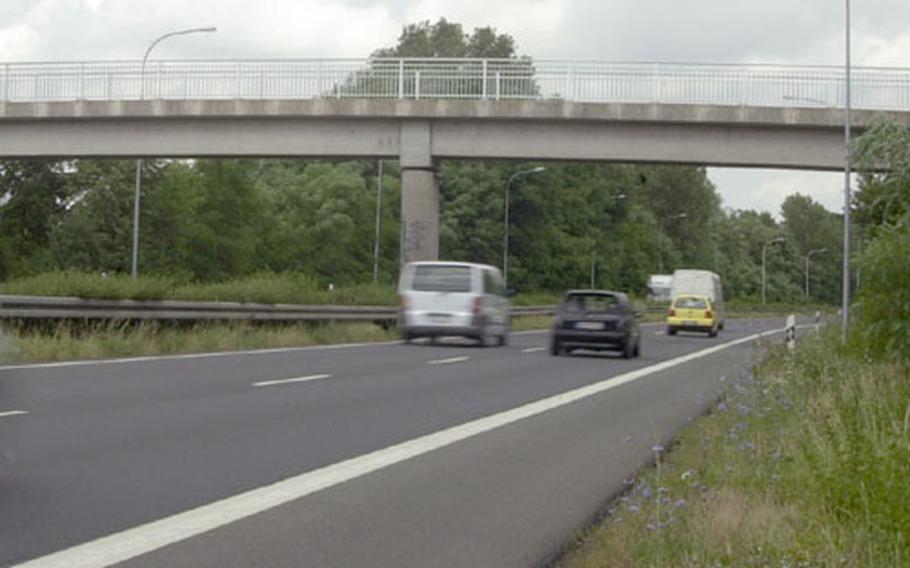 At speeds of greater than 60 mph cars zip under a bridge spanning the B3 highway behind the Lincoln Village housing area in Darmstadt, Germany. Four military dependents were detained by German police for throwing stones from the bridge. (Raymond T. Conway / S&S)

DARMSTADT, Germany &#8212; Four American children were detained late Monday for throwing egg-size rocks at cars from the same pedestrian bridge where an similar episode resulted in the deaths of two people.

Unlike the February 2000 case, no one was killed or injured, German and U.S. authorities said Tuesday.

The children, who range in age from 5 to 9 years old, were picked up by German police and later released to their parents. Darmstadt military officials will not take any disciplinary action until they and German authorities complete their investigation.

&#8220;We take every incident seriously,&#8221; said Teri Viedt, spokeswoman for the 233rd Base Support Battalion in Darmstadt.

German police learned of the incident from a 41-year-old American who was driving his car down the four-lane stretch of highway at about 7:20 p.m. on Monday.

The man, who was driving to Darmstadt from the nearby town of Eberstadt, called police to report that several boys were throwing rocks into the traffic lanes from the pedestrian bridge. At the base of the bridge, not far from where the rocks landed, is a wooden cross marking the site where Karin Rothermel was killed in 2000. Sandra Ottmann, driving a a second vehicle, was also killed.

As a result of the deaths, the bridge was closed for more than two years.

In Monday&#8217;s incident, a German police news release said that when the German police arrived on the scene, the boys were in the process of scooping up more rocks to throw. The children live in the Lincoln Village housing area, near the bridge.

The footbridge, which spans the B-3 highway, links Lincoln Village with a German park and housing area. It was from that span more than three years ago that three teens hurled several large stones onto unsuspecting motorists below.

In December 2000, the teens pleaded guilty in German court to two counts of murder and three counts of attempted murder. The teens received sentences ranging from seven years to 8&#189; years.

Perhaps the greatest blow this time around is to the Darmstadt military community. One member of the community said she couldn&#8217;t believe such an incident had happened again.

But, Viedt added, that doesn&#8217;t make this latest incident any easier to understand.