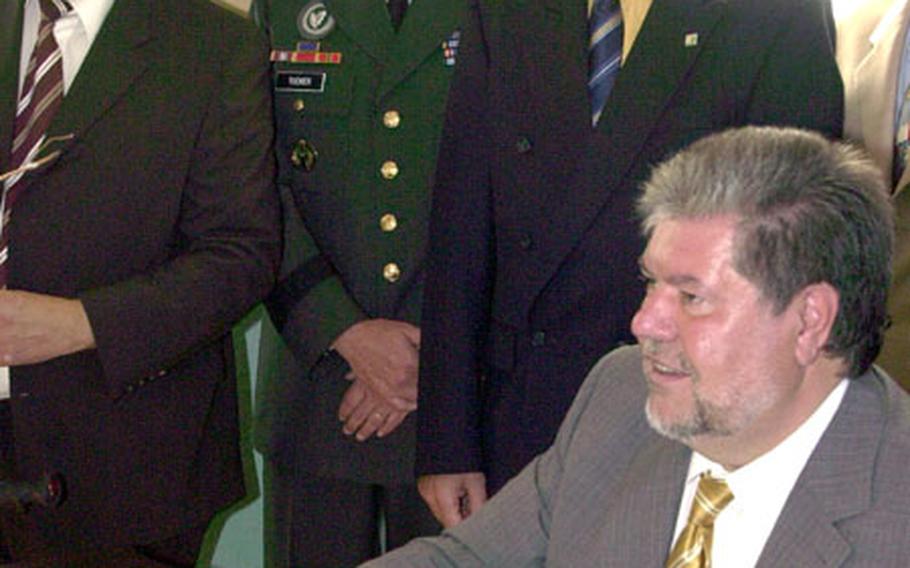 BAUMHOLDER, Germany &#8212; German officials are preparing another &#8220;save Baumholder&#8221; offensive in Washington.

But their expectations for success are low, with Kurt Beck, president of the state of Rheinland-Pfalz, even discussing a plan for a worst-case scenario &#8212; a total American pullout.

During an interview Wednesday, Beck was hesitant to rate the chances of keeping open H.D. Smith Barracks and satellite caserns, which make up the largest combat-arms base outside the United States.

In a speech preceding the interview, Beck told Baumholder residents that he is leading a third state delegation to Washington, D.C., later this month in connection with a Germany embassy exhibit on the 15th anniversary of reunification.

While in the U.S. capital, Beck &#8212; whose position is comparable to that of an American governor &#8212; and other state-level officials will once again emphasize Baumholder&#8217;s plusses, including a public-private partnership to build more housing, its proximity to the Ramstein air hub and strong ties between locals and the U.S. Army.

Defense Department spokesman Lt. Col. Christopher Conway said he personally was not aware of any request for a meeting by the Baumholder group, but that defense officials are sensitive to the overseas basing issues and willing to work with foreign officials.

Baumholder, about 40 miles north of Ramstein Air Base, is home to about 10,000 Americans including about 5,000 soldiers assigned to the 1st Armored Division&#8217;s 2nd Brigade, Division Artillery and perhaps a dozen other tenant organizations and units.

But Karl Peter Bruch, Rheinland-Pfalz interior minister, said he&#8217;s concerned the delegation may not have access to the high-level officials they&#8217;d lobbied in the past &#8212; including Raymond F. DuBois, special assistant to the secretary of the Army &#8212; because those people may be focused on the Hurricane Katrina crisis and the Iraq war.

And if the final answer American answer is &#8220;no,&#8221; Beck said he is considering a plan to try to save the hundreds of German jobs on base by replacing the American presence with a multipurpose training area for German military, NATO and German police at Baumholder&#8217;s 25,000-acre training area.

There has been little reason for the Germans to expect a happy ending at Baumholder.

Citing an April 7 update on the impact of restructuring U.S. forces in Europe from Gen. B.B. Bell, U.S. Army Europe commander, Army officials have stated that the four future Army hubs in Europe will be the Kaiserslautern area, the Grafenw&#246;hr area, the Weisbaden area and Vicenza area in Italy, said Lt. Cmdr. Rick Haupt, U.S. European Command spokesman in Stuttgart.

In March, Gen. James Jones, EUCOM commander, stated through public affairs officials that Baumholder is not on a list of &#8220;enduring communities.&#8221;

In 2003, DuBois told Bruch and other German officials that Baumholder would survive, part of the Ramstein/Kaiserslautern cluster of bases. But during a second visit in May 2004, DOD officials showed the Rheinland-Pfalz delegation a list of surviving U.S. bases in Germany, and Baumholder wasn&#8217;t on it.

On Wednesday, Beck ticked off a number of Rheinland-Pfalz initiatives to persuade the Americans to say &#8220;yes,&#8221; including a private-public partnership to upgrade U.S. facilities at Baumholder and elsewhere. However, there were no new proposals from 2004.

Last winter, German officials were recruiting private investors to commit to financing $130 million worth of new U.S. facilities or upgrades, including 500 housing units at Ramstein, Spangdahlem and Baumholder. Under the plan, the Department of Defense would commit to long-term leases on the property rather than having to fund expensive one-time military construction projects.

In addition, the Germans are planning to upgrade the railhead facilities at Baumholder, Beck said.

But Rheinland-Pfalz officials say they don&#8217;t understand why, with the emphasis on making Ramstein the primary overseas U.S. military air hub that officials want to close the largest neighboring military base.

Beck said he still believes Americans will realize the value of training &#8220;literally right outside&#8221; of H.D. Smith Barracks, instead of moving tanks, Bradley fighting vehicles and other heavy equipment 350 kilometers east to Grafenw&#246;hr&#8217;s gunnery range and the Hohenfels maneuver area.

&#8220;If [the Americans] are going to have heavy weapons close to Ramstein, it makes sense to have them near Baumholder,&#8221; where there is vast infrastructure, security and local support, Bruch said.

Assets that Germans hope will save Baumholder

&#182; Its location is about 40 miles northwest of Ramstein, which is becoming the U.S. military&#8217;s main air hub in Europe. Also nearby is the Kaiserslautern military community, the logistic hub for U.S. forces in Europe.

&#182; At about 25,000 acres, it is the third-largest maneuver/training area in Germany, behind Grafenw&#246;hr and Hohenfels. However, Baumholder has no similar high-tech target and ranging capabilities.