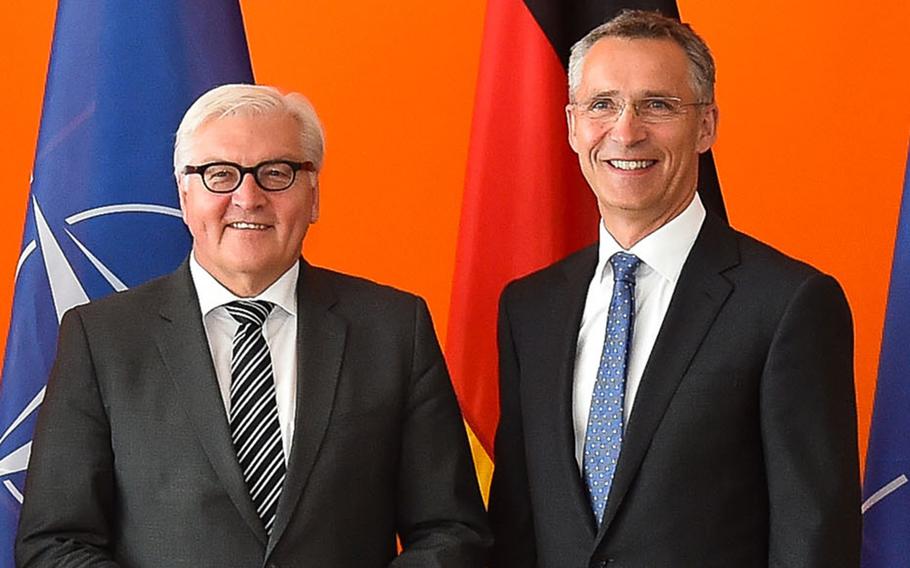 German Foreign Minister Frank-Walter Steinmeier and NATO Secretary-General Jens Stoltenberg at a meeting in Berlin in June 2015. In a newspaper interview published Sunday, June 19, 2016, Steinmeier spoke against what he deemed excessive military posturing and warmongering by NATO allies. (NATO)

STUTTGART, Germany — The German foreign minister’s recent allegations of “saber-rattling” by NATO have exposed a possible rift in the alliance that could test its unity on how it deals with Russia just weeks before leaders gather for a key summit.

German Foreign Minister Frank-Walter Steinmeier raised eyebrows over the weekend when he spoke in an interview against what he deemed excessive military posturing and war-mongering by NATO allies, who have been involved in high-profile war games in eastern Europe, along Russia’s periphery.

“What we should not do now is further inflame the situation with loud saber-rattling and war-mongering,” Steinmeier said in an interview with the newspaper Bild am Sonntag. “Anyone who believes that symbolic tank parades on the alliance’s eastern border will increase security is wrong. We would be well advised not to deliver up any excuses for a new, old confrontation.”

The rare public scolding of NATO comes at a time when allies are attempting to project a sense of unity ahead of a major summit next month in Warsaw.

The accusations of “saber-rattling” were rejected by allies, especially those in eastern regions unnerved by Russia’s recent military buildup, as well as inside Germany itself.

“These are outrageous accusations,” Norbert Roettgen, the conservative head of the foreign affairs committee in the German parliament, said during a German radio interview Monday. “Even Frank-Walter Steinmeier knows that what he said has no relation to reality.”

Steinmeier’s comments also seem at odds with Germany’s recent pledge to serve as one of four NATO nations to lead a rotational battalion in the Baltics, a notable decision considering Moscow’s anger over the plan and Germany’s historical sense of caution when it comes to deploying force into eastern Europe.

Still, Steinmeier’s critique underscores a persistent tension within NATO that allies have struggled to resolve during the past two years. The alliance is attempting to strike a balance between the demands of countries such as Poland, which seek a more robust NATO presence, and widespread reservations among major NATO players such as Germany about a military build-up so close to Russia’s borders.

As NATO heads of state prepare for next month’s Warsaw summit, where plans will be detailed for the formation of the new multinational battalions in Latvia, Lithuania, Estonia and Poland, ambivalence from Germany’s top diplomat could indicate a crack in unity regarding the West’s overall posture toward Russia.

Steinmeier, a leader of Germany’s Social Democratic party, which is in coalition with Chancellor Angela Merkel’s Christian Democratic Union, also has indicated that the European Union should soon consider phasing out sanctions against Russia over its intervention in Ukraine two years ago. That position is apparently at odds with Merkel.

Without singling out the U.S. specifically, Steinmeier’s criticism of military maneuvers follows a series of major summertime exercises along NATO’s eastern flank, hitting a peak earlier this month when 31,000 U.S. and Polish troops took part in a massive exercise dubbed Anakonda 16. That two-week drill imagined an enemy invasion of Poland. At the same time, the U.S’s 2nd Cavalry Regiment embarked on a tactical road march from Germany to the Baltics, stopping along the way to meet with cheering locals in a demonstration of solidarity.

"The exercises should in no way be seen as a threat to any specific country," said Danny Hernandez, spokesman for U.S. European Command. "We had a number of distinct exercises taking place this summer, all of which have distinct purpose, participation and storylines."

Now, allies are in the midst of “Saber Strike” in the Baltics, a multinational exercise that tests rapid reaction capabilities and puts scores of troops near NATO’s border with Russia. Other NATO exercises are currently underway.

Moscow has criticized the series of exercises in eastern Europe as “provocative.”

NATO has defended its various military activities in eastern Europe, saying they are well publicized and transparent, unlike many Russian drills that allies have complained have taken the West by surprise.

NATO spokeswoman Oana Lungescu said the Anakonda 16 exercise, which ended last week, had been announced well in advance and that Russia had been invited to send observers. “What NATO does is defensive, proportionate and in line with our international commitments,” Lungescu said.

While NATO Secretary-General Jens Stoltenberg has emphasized there is “no contradiction” between political dialogue and defense, Steinmeier indicated he sees the West tilting too far toward military deterrence.

“It would be fatal now to focus exclusively on military aspects and to look for salvation solely from a policy of deterrence,” Steinmeier said. “After all, history teaches us that, alongside the common will to ensure defense readiness, there must always also be a readiness to engage in dialogue and cooperation.”

His comments drew sharp criticism and even ridicule from German newspaper commentators.

“Does (Russian President Vladimir) Putin have a birthday, perhaps, and there wasn’t a present?” wrote Berthold Kohler, one of the publishers of the Frankfurter Allgemeine, one of Germany’s premier newspapers. “Really, one has to rub one’s eyes. It’s not the Russian foreign minister who is accusing the western defense alliance of ‘loud saber-rattling’ and ‘war-mongering’ because of its maneuvers on the territory of eastern NATO states, but the German.”