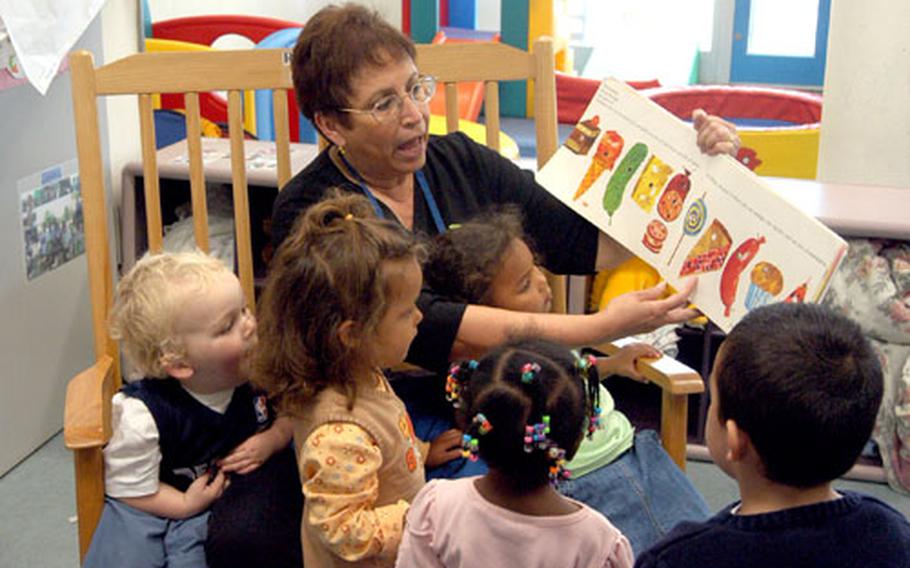 Adding her own sound effects to a story, Linda Vogt reads a book to 2- and 3-year-olds at the Child Development Center in Darmstadt, Germany. A shortage of caregivers at many Army Child and Youth Services programs in Germany and Italy has led officials to hire local nationals as providers. (Michael Abrams / S&S)

Adding her own sound effects to a story, Linda Vogt reads a book to 2- and 3-year-olds at the Child Development Center in Darmstadt, Germany. A shortage of caregivers at many Army Child and Youth Services programs in Germany and Italy has led officials to hire local nationals as providers. (Michael Abrams / S&S) 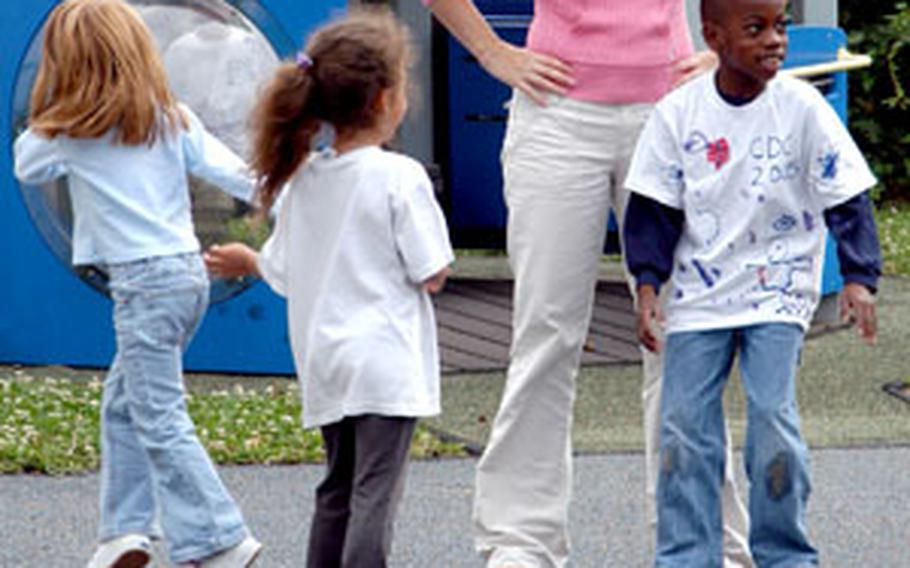 But in Schweinfurt, Germany, American children are learning some new songs in day care these days. &#8220;Guten Tag, Guten Tag&#8221; is a favorite.

The German songs are the result of the Army Child and Youth Services providers also learning a new tune, of sorts. As officials looked around for ways to find employees &#8212; in the face of what child-care officials say is the largest and most persistent child-care worker shortage in memory &#8212; they found what was in their own backyards: a nation of willing, highly skilled workers.

In the past few months, scores of local nationals, primarily German, have been hired for the first time to provide care to U.S. children getting services from CYS across Germany. That number is expected to grow.

&#8220;Truly, our face and our complexion is going to be changing,&#8221; said Ellen Sheppard, CYS inspection chief for the Installation Management Agency-Europe. &#8220;We&#8217;re looking outside the military spouse applicant pool.&#8221;

While officials were hesitant at first to hire German caregivers for the thousands of children in their charge &#8212; worrying about cultural differences and language barriers &#8212; they say they&#8217;ve been very pleased with how it&#8217;s working.

Bonnie Cornelison, CYS chief in Schweinfurt &#8212; who last year saw nearly one-half her staff quit and pioneered the local-national hiring program &#8212; said there weren&#8217;t a lot of other options.

For years, the staff of the Army&#8217;s child-care programs have been primarily the wives of U.S. active-duty soldiers. Military spouses are given preference in hiring, and the job, which starts at about $9.25 an hour &#8212; up since March from $8.63 an hour &#8212; can provide entry into a civil-service career.

But that pool of workers started drying up in Germany as thousands of soldiers deployed to Iraq. Many of those wives either went back to the United States, or, if they stayed in Germany, quit their day-care jobs to be at home more with their own children, officials said. Some worked through the deployment, then quit when their husband returned so they could spend time with their families.

The hardest hit areas, according to officials, were Baumholder, Darmstadt, Hanau, Schweinfurt, Wiesbaden and W&#252;rzburg, all in Germany, and Vicenza, Italy. Additionally, the crunch was felt most in all-day care programs, for infants and children up to 5 years old.

In many cases, Sheppard said, she believes deployments to the Iraq and Afghanistan wars have changed the family dynamic, perhaps permanently.

For months before the local nationals began being hired, stop-gap measures were put in place to keep child care available. The military spouses who remained worked heroically long hours, officials said. Students from the University of Northern Iowa &#8212; known as &#8220;surge interns&#8221; &#8212; took off some of the pressure and, in some places, workers flew in on temporary-duty status from the United States.

But that applies to families who were already getting services. Currently, as the staff shortage continues, entire rooms in care centers remain closed or only partially filled to comply with regulations mandating staff-to-children ratios.

At the same time, the waiting list throughout Germany (and in Italy) contained the names of 755 children. Their parents, Sheppard said, have had to make other arrangements.

Officials realized they needed a long-term solution that would provide some level of consistency. Schweinfurt hired the first of the local nationals in January. In March, after regulation tweaking and streamlining, the jobs were opened throughout the region.

The response has been encouraging, Pike said. Many of the applicants had degrees in early childhood education &#8212; something not required for U.S. citizens. Some traveled from Heidelberg or even Berlin and, Pike said, at least one person relocated to take a job.

So far, some 43 local nationals have been hired in the W&#252;rzburg area &#8212; now known as U.S. Army Garrison Franconia &#8212; with the hopes of 41 more. In Grafenw&#246;hr, 15 have been hired, with recruiters looking for six more, the same number providers in Heidelberg and Mannheim hope to recruit.

In Vicenza, 10 Italian citizens have been hired, starting in December, and seven more are expected to start this fall.

Tanja Perryman heard about the Schweinfurt opening she filled in May from the German unemployment office. Perryman, with a degree in social work but no job prospects in the overcrowded field, had worked at a German preschool. The CYS job paid better, she said, and offered training.

Perryman has noticed some cultural differences, such as an American emphasis on hygiene.

Perryman has worked with toddlers and in the infant room. There, she said, the language one speaks is less important.