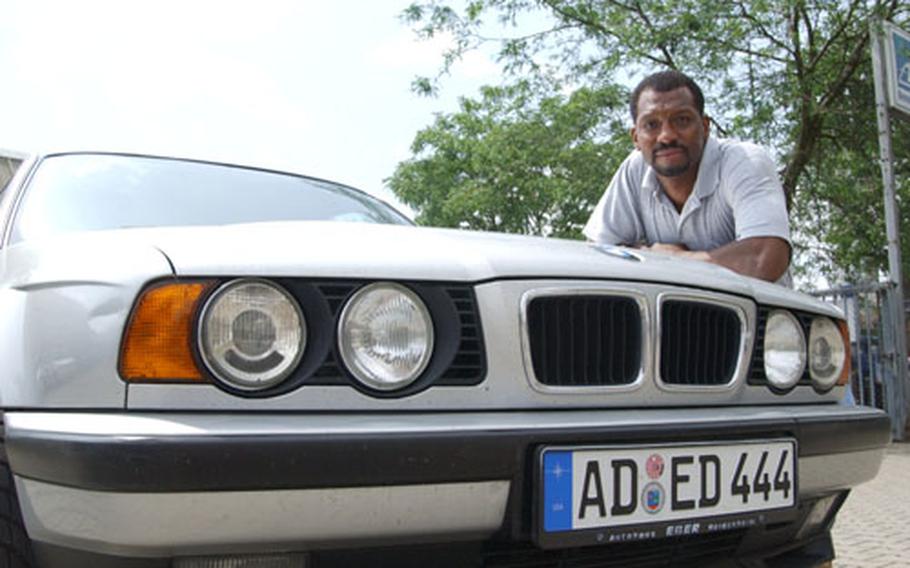 Lewis Pullum hasn&#39;t spent much time behind the wheel of his 1993 BMW since he bought it in April. He is battling with a dealership in Mannheim to honor the one-year German legal warranty to fix the car. The car started showing signs of major mechanical problems a week after he bought it. (Lisa Horn / S&S)

Americans in the market for a used car in Germany may not be aware of a one-year warranty guaranteed to them by law.

If Lewis Pullum had asked about the warranty, he may have been able to save himself a few headaches and a few dollars.

Pullum, an industrial equipment repairman at Rhein-Main Air Base, learned about the law the hard way. When Pullum purchased his 1993 BMW 540i from a car dealer outside of Mannheim&#8217;s Sullivan Barracks in April, the dealer offered only a 30-day warranty.

A car hobbyist, Pullum test- drove the car, which he said appeared to be in good condition.

His fears were confirmed when he had his regular mechanic evaluate the car. The list of repairs, which included new brake pads, rotors and a water pump, totaled 2,396.90 euro. Pullum paid 5,000 euro, or about $6,240, for the car.

To make matters worse, the dealership refused to honor the 30-day guarantee and denied any responsibility in having to honor the one-year warranty, Pullum said.

Repeated calls to the car dealer for this article were not returned.

In January 2002, under a European Union directive on consumer protection, Germany changed its laws on tangible property sales to better protect the consumer. All German dealerships must provide a 12-month warranty for every used car they sell.

Ensuring that a dealership provides the warranty will save the buyer a lot of heartache and legal hassles if a dream BMW or Mercedes turns out to be a lemon, said German lawyer Roland Schwengebecher, who is representing Pullum in his dispute with the car dealer.

Under the old law, the buyer had to prove that the car&#8217;s damage was there before the vehicle was taken off the lot. Now, the buyer does not have to prove the damage, but must claim damage within the 12-month timeframe.

&#8220;When you buy a car from a dealer, your position as the consumer is much better than it was two years ago,&#8221; said Schwengebecher, whose office is in Dietzenbach.

The German lemon law, B&#252;rgeliches gesetz buch, para. 434ss, states that if a used car bought from a dealership is defective, the dealer must take the car back or pay for repairs. The law does not apply to private sellers.

Getting your money back, however, isn&#8217;t as easy as returning the car back to the lot. The defects must be determined to have been present at the time of sale and not resulting from wear and tear, said Kerstin Bartnik, German legal assistance lawyer in Darmstadt and Hanau.

Then, the dealer may dispute the appraisal and the case ends up in court, which is where Pullum&#8217;s dispute is now.

Three months after driving it off the lot, Pullum&#8217;s silver BMW sits at the mechanic&#8217;s shop, awaiting the results of the legal case.

&#8220;In my opinion, a lot of Americans buy used cars from military sales and the dealers haven&#8217;t got any idea of German law,&#8221; Schwengebecher said.

&#8226; By law, German dealerships must honor a one-year warranty for all used cars they sell.&#8226; The dealer is responsible for defects determined (usually by a third party appraisal) to have been there at the time of sale; not resulting from regular wear and tear or negligence. For example, worn brake pads.&#8226; The buyer must file a claim with the dealer before the one-year term has expired.&#8226; The bylaws of this consumer directive, which other countries in the European Union have also adopted, also apply to other property, such as mobile homes, computers and other immobiles.