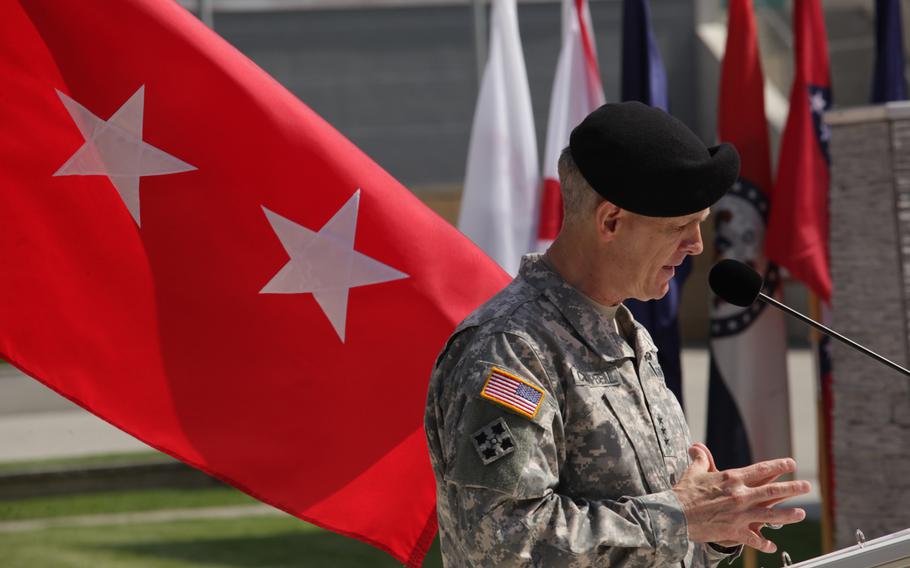 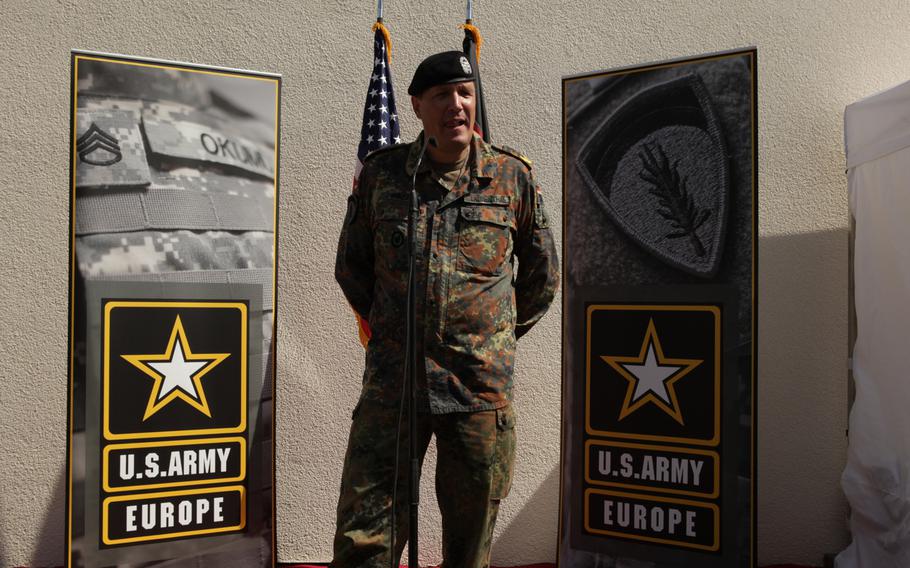 WIESBADEN, Germany — U.S. Army Europe formally welcomed German Brig. Gen. Markus Laubenthal as its new chief of staff Thursday, beginning what one German official said would likely be the first of many such exchanges between the U.S. and German armies.

Since USAREUR was established after World War II, a foreign officer has never served as chief of staff of the three-star command, headed since late 2012 by U.S. Lt. Gen. Donald M. Campbell Jr.

Laubenthal’s role in the organization will be much more than symbolic, Campbell said, though U.S. law precludes Laubenthal, as a German officer, from seeing some classified information that American officers in the same position would be able to access.

As the U.S. and NATO allies draw down from Afghanistan, military leaders have emphasized the need to continue to work together to maintain the interoperability the various forces have gained over more than a decade of war.

“As we all know, actions speak louder than words,” Campbell said, “and this innovation carries a very strong message regarding our seriousness about a multinational team.”

One U.S. official said it’s estimated that Laubenthal will be able to carry out about 90 percent of the tasks typically performed by a USAREUR chief of staff, who is directly responsible for organizing, directing and supporting roughly 30 senior leaders who make up the command’s staff.

While Laubenthal’s assignment is a first for the German military and USAREUR, Campbell played down its novelty.

The U.S. has been at war alongside Germany and other NATO and partner nations for 13 years, he said, “so having a multinational general on our staff is not really something new, because they’ve seen it in theater, they’ve seen it in combat.

“In fact, I had a Canadian deputy commanding general at III Corps and Fort Hood,” Campbell said. “And we have other multinational officers in service in the United States and in U.S. Army Pacific.”

To those who might question the move, Campbell said: “I would step back and take a look at what we’ve been doing in combat for the last 13 years. We don’t fight it alone, we don’t go alone.”

American officials provided a fact sheet addressing some concerns about a foreign officer in such a high-level position in the U.S. Army, among them:

Laubenthal won’t have disciplinary authority over U.S. personnel; He will not be able to represent the command outside of the command on his own; He won’t command U.S. forces; He won’t have access to U.S. law-enforcement information, diplomatic communications, information related to U.S. theater security objectives and a range of other information; and He will have access to classified information that has been cleared for disclosure. “What we saw today is really a kickoff,” German Lt. Gen. Jörg Vollmer said after a ceremony at Clay Kaserne welcoming Laubenthal.

Vollmer, the second in command of the German military, said that the Germans are open to assigning an American officer to a similar position within the German army.

Campbell said he first approached the German army’s chief of staff about putting a German general on the USAREUR staff in January 2013, soon after he took command and well before revelations of U.S. spying on Germans came to light. Campbell said he wants to “continue to look for ways that we can grow from this position and use it to leap to other positions at junior grades.”

Laubenthal, who most recently served as a German tank brigade commander and chief of staff for NATO’s Regional Command North in Afghanistan, said he’s a “true believer in the idea of organizing and training” as you would deploy in a military campaign.

“It’s really, really important to work with other nations together as close as you can and even before an operation starts,” he said.