With more than 100 signs to memorize and Germany’s odd right-of-way rules, taking the U.S. Army Europe driving test can be a daunting ordeal for newcomers to Germany. (Raymond T. Conway / S&S)

With more than 100 signs to memorize and Germany’s odd right-of-way rules, taking the U.S. Army Europe driving test can be a daunting ordeal for newcomers to Germany. (Raymond T. Conway / S&S) 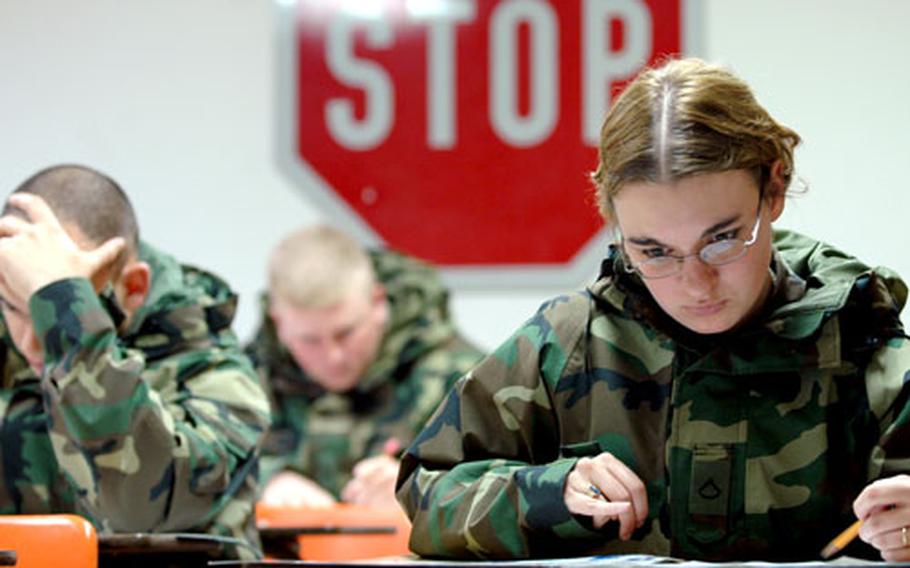 Meet the Mariotts and the Tanners, two couples recently arrived in Germany. Both ready, one recent afternoon in Heidelberg, to take the test they hoped would allow them to do something they&#8217;d been enjoying at home since age 16: drive.

Two couples, one test. If statistics held, three of the four would go home smiling.

But the fourth would be a licenseless failure.

The Mariotts, both 25, needed their U.S. Army Europe licenses as soon as possible so that Jacquelyn, who is seven months pregnant, could get to doctor appointments. They had studied their driver&#8217;s handbook and examination manual for Germany together, poring over the right-of-way rules, and together attended the mandatory pre-test class. But with different results.

In a lobby near the testing room of the 26th Area Support Group, Dwayne Tanner, 37, relaxed after passing his test. The USAREUR computer specialist had taken a similar test many years before on a previous tour, when his job took him all over Germany.

His 29-year-old wife was one of the last to finish, emerging glumly from the testing room with red-rimmed eyes. Well? Tanner asked.

Each year at U.S. Army posts in Germany, thousands of Americans sit down for the lengthy test that will determine whether they can grasp Germany&#8217;s driving rules and hit the road. And each year, at least a quarter &#8212; and up to nearly a half of them &#8212; fail, depending on the post.

Do more men than women fail, or vice-versa? What about officers versus enlisted? Older versus younger? Authorities say they&#8217;ve noticed only one trend.

The test, which is about to become slightly shorter if not less daunting, is a rite of passage for the majority of military members and their spouses assigned to Germany. Passing the exam on Europe&#8217;s many road signs and right-of-way rules allows them to get a USAREUR license.

According to USAREUR, last month there were 246,000 USAREUR-licensed drivers &#8212; soldiers, other military members, Department of Defense civilians and family members. The license is good for five years.

Lt. Col Mark Landers, commander of the 233rd Base Support Battalion based in Darmstadt, said being licensed to drive in Germany is vital for numerous military missions. But he said, learning the German rules of the road is the most important thing for American drivers.

Then the German government distributed a film with a German police officer discussing the driving dos and don&#8217;ts. It&#8217;s been required viewing ever since.

And what would really be a good idea, he said, is a road test.

Since 1992 at Darmstadt, he said, the failure rate has fluctuated between 20 percent and 29 percent, and usually hovers near 25 percent.

Many Americans report that the right-of-way questions are the most difficult to understand. Most agree, though, that the signs, which require memorization only, are not usually a problem unless the test takers are just not motivated to pass.

Spc. Echo Tanner has twice passed her sign test. But last week in Heidelberg, the military policewoman had failed the main test for the second time &#8212; with 16 wrong answers. Now, according to the rules, Tanner can&#8217;t take the test again for two weeks.

Her platoon sergeant was understanding the first time she failed, she said, when she was still jet-lagged and slept through the class. She wasn&#8217;t sure what she was going to tell him this time.

Germany&#8217;s accident rates are higher than in the United States because there are more cars in less space, narrower streets and no speed limits on some stretches of autobahns, according to a U.S. Army Europe car insurance pamphlet.

There are no reliable statistics on whether Americans are involved in more car collisions than Germans.

Last year, 6,041 accidents involving cars registered to USAREUR drivers were reported both on and off bases in Germany, according to USAREUR spokesman Bob Purtiman.