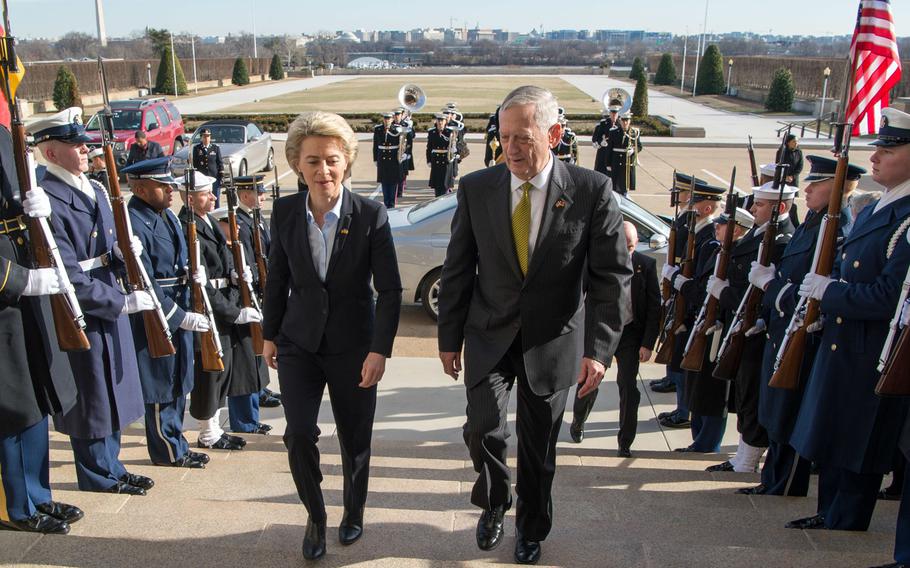 Secretary of Defense Jim Mattis meets with Ursula von der Leyen, Germany's defense minister, at the Pentagon in Washington on Feb. 10, 2017. Von der Leyen has vowed to reform the German military after the arrest of two soldiers alleged to have plotted a terrorist attack and blame it on refugees. (Jette Carr/U.S. Air Force)

KAISERSLAUTERN, Germany — Germany’s embattled defense minister has pledged to reform the country’s armed forces following the arrest of two soldiers alleged to have plotted a terrorist attack they tried to blame on refugees.

German media reports said Ursula von der Leyen, a member of Chancellor Angela Merkel’s center-right party, told Parliament on Wednesday that the Defense Ministry would streamline the process for reporting right-wing extremist threats and increase the “political education” in the ranks of the country’s more than 178,000-member all-volunteer armed forces.

German media said the armed forces, or Bundeswehr, would also review a 1982 guideline on how to treat the mixed legacy of the Germany World War II military, which on the one hand took part in Nazi atrocities in World War II but also coordinated a failed attempt to assassinate Adolf Hitler in 1944. Critics have alleged that idolization of the Wehrmacht, Germany’s wartime army, has overlooked its role in atrocities and encouraged extremist sentiment.

Concern over right-wing extremism in the modern-day Bundeswehr increased following the arrest last month of a 28-year-old lieutenant who allegedly planned a terrorist attack that he hoped would be blamed on refugees. A student and a second soldier have also been arrested in the alleged plot.

Von der Leyen initially blamed the conspiracy on “weak leadership” in the armed forces that tolerated political extremism, sexual harassment and bullying within the ranks — a charge that infuriated leaders within the Bundeswehr.

The controversy has boiled up at a difficult period for Merkel, who faces parliamentary elections in September in which her decision to accept more than 1.5 million refugees is a major issue. The government is also under pressure from President Donald Trump’s administration to speed up defense spending to meet NATO targets.

Last month the German Military Counterintelligence Service said it was investigating 275 cases of right-wing extremism among Bundeswehr members within the last two years.

Hans Kundnani, a researcher with the German Marshall Fund, said in an interview with Foreign Policy magazine that the problem was due in part to a disproportionate number of Bundeswehr members from former Communist eastern Germany, where right-wing extremism is more widespread than in the west. He said eastern Germans make up 20 percent of Germany’s more than 82 million people but more than a third of the military recruits.

A prominent member of Merkel’s party, Patrick Sensburg, has called for reinstituting the draft because conscripts would serve as a “reliable early-warning system” about extremists in the ranks. Merkel, whose government ended the draft in 2011, rejected the proposal Thursday, saying what the Bundeswehr needs is “predictability.”

So far Merkel has continued to support von der Leyen, whose late father was a leading figure in the chancellor’s Christian Democratic Union party.

However, members of the left-leaning Social Democrats, the junior partner in Merkel’s governing coalition, and the Green Party faulted von der Leyen for not taking personal responsibility after three years as defense minister.

“Extreme mistakes were made at a high level,” Rainer Arnold, defense spokesman for the Social Democrats, was quoted by German media. He accused von der Leyen of creating “an environment of uncertainty and mistrust” within the military.

“The minister acts as if she is the great enlightener,” Arnold said. “In reality she has created some of the problems herself.”

Christine Buchholz, a member of the Left party, told German media that the case clearly involved “a far-right extremist terror cell,” and urged von der Leyen not to treat it as an isolated incident.

Von der Leyen has apologized for critical remarks about “weak leadership” and acknowledged that she also bears responsibility. She said it was important to move “with all firmness” in cases of misconduct, “not just rightwing extremism but also cases of sexual violence.”

“The overall responsibility lies with me, that is not in question,” she said.

She pledged to improve accountability and leadership training from the lowest to the highest levels of the German military.