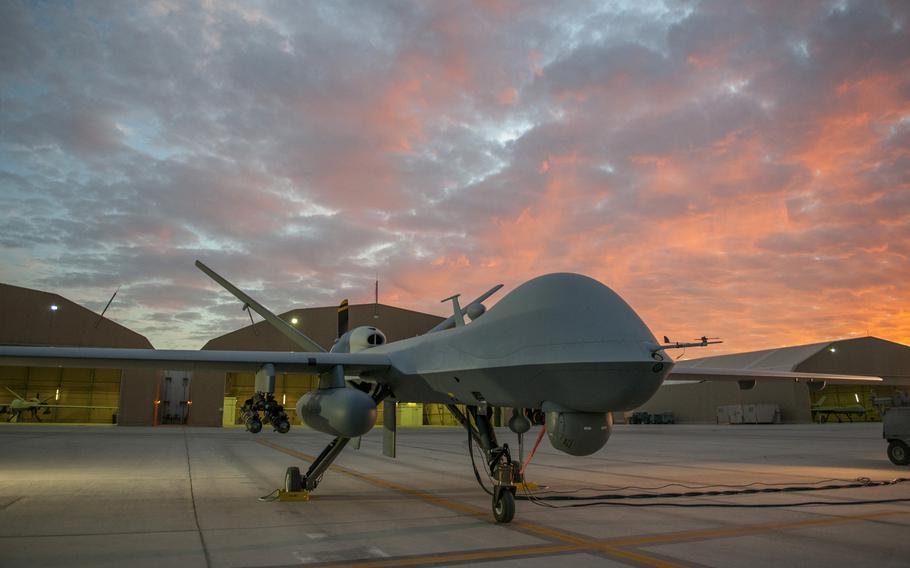 An MQ-9 Reaper from the 62nd Expeditionary Reconnaissance Squadron sits on the ramp at Kandahar Airfield, Afghanistan, Dec. 6, 2015. A German court ruled on Tuesday, April 5, 2016, against an activist who claims Ramstein is used to coordinate drone strikes overseas. (Robert Cloys/U.S. Air Force)

KAISERSLAUTERN, Germany — A German federal court has dealt another blow to legal challenges against the role Ramstein Air Base is alleged to play in U.S. drone strikes overseas.

The federal administrative court in Leipzig on Tuesday, reviewing an appeal filed by activist Wolfgang Jung, was the third court to find he had no standing to file such a lawsuit.

Jung argued that Ramstein’s alleged part in the drone mission violates his individual rights because drone strikes overseas could lead to violent backlash against Germany from abroad. But the court said that Jung, a German activist and retired teacher who lives in the Kaiserslautern area, has no legal standing to make such claims and demands.

The court ruled that only individuals affected by drone strikes have the legal standing to challenge an alleged violation of international law.

Jung appealed his case after lower courts in Cologne and Muenster tossed out his lawsuit for the same reasons. Before Tuesday’s ruling, Jung told German radio that he intends to take his case to Germany’s highest court if necessary.

Tuesday’s ruling affirmed previous lower court decisions that Jung has no right to demand that the German government monitor U.S. forces’ involvement in drone strikes, even if those strikes were being directed from Ramstein. It has not been established that the air base has played any role in drone strikes overseas; Military officials at the base have said in the past that no Ramstein facilities are used to directly fly or control any remotely piloted aircraft.

The decision comes less than a year after a court in Cologne ruled in a separate case that Germany does not have to stop the United States from allegedly using Ramstein to coordinate drone strikes in Yemen. That case was brought against the German government by the family of two men killed in a drone strike in Yemen nearly four years ago. Three suspected al-Qaida members were also killed in the strike.

The family said Germany should be held accountable for the deaths and demanded the government ban the use of Ramstein for such operations.

The U.S. drone program, run by the CIA and U.S. military, has been mired in controversy for its killing of civilians while targeting suspected terrorists.

While drones are not piloted from Ramstein, the base is alleged to play a critical role in the U.S. drone war. Much of that information only came to light in 2013 after former U.S. Air Force drone sensor operator, Brandon Bryant, alleged that the technology used at Ramstein transfers data between drone pilots in the United States to their remotely operated aircraft flown in the Middle East, Afghanistan and Africa. Bryant was one of the first people to reveal the extent of Ramstein’s alleged involvement in the U.S. drone program and received a “whistleblower award” from a private German association last year.