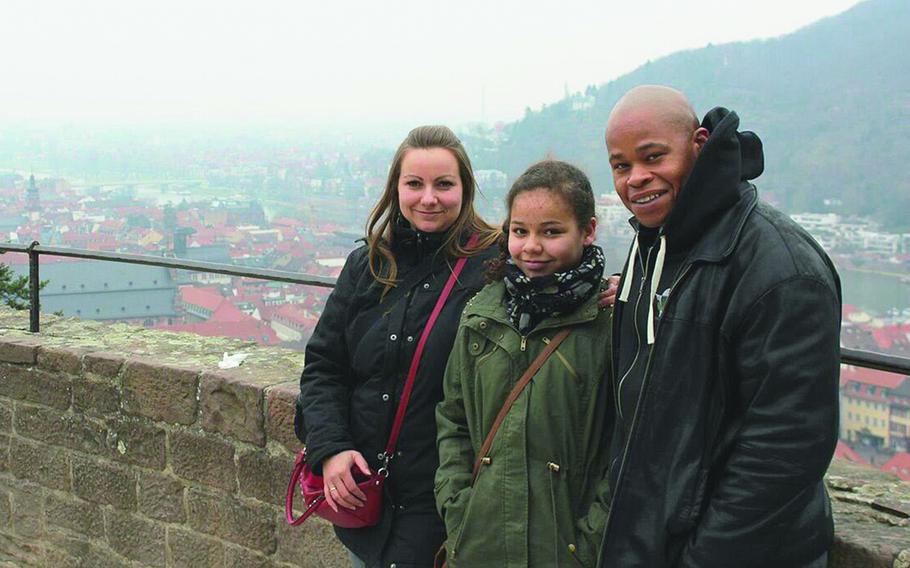 Amber Walker, then 10, stands between her parents, Claudia and Edmond, at Heidelberg Castle in Germany in 2013. Amber was killed on a ride at Holiday Park in Hassloch, Germany, in August 2014. Germany's highest court cleared the supervisors of an operator at Holiday Park, who previously were found guilty of criminal negligence in the death. (Photo courtesy of Claudia Walker)

KAISERSLAUTERN, Germany — A German appeals court has ruled that two Holiday Park employees were not responsible for the 2014 death of a former U.S. soldier’s daughter on a family ride, even though the men were found to have been lax in some of their duties.

The employees were acquitted of negligent homicide last month in Zweibruecken Higher Regional Court. They faced up to five years in prison.

Under German law, the names of defendants acquitted of a crime cannot be released.

Holiday Park, located in the countryside outside Hassloch, near Speyer, is one of Germany’s most popular theme parks. It’s a frequent destination for American servicemembers and their families who are stationed an hour or less away at bases in the state of Rheinland-Pfalz and throughout Germany.

Amber Walker, 11, was killed on Aug. 15, 2014, on Spinning Barrels, a family attraction that spins riders around in barrel-shaped seats atop rotating platforms.

Prosecutors maintained that the two supervisors shared blame with the ride operator for a series of careless mistakes that allowed Amber and her mother, Claudia Walker, to gain access to the platform seconds before the ride started.

Among those mistakes was an unchecked entry gate to the ride that was left open and a failure by the ride’s operator to announce the ride was about to begin. The ride started while Amber and Walker were standing on one of the platforms, throwing Amber between the moving platforms. She died from traumatic injuries.

The operator of the ride, Thanujan Tharmathurai, was found guilty of negligent homicide in 2016. A 22-year-old Kaiserslautern university student at the time, he was ordered by the local court in Neustadt to pay a fine of 2,400 euros (about $2,800). He received no prison time.

Tharmathurai did not make an announcement warning the ride was about to start, but he said in court that he was not trained to do so.

Prosecutors appealed the verdict, together with Walker and Amber’s father, Edmond Walker, a light-wheel vehicle mechanic assigned to U.S. Army Garrison Wiesbaden at the time of the accident. They alleged the two men didn’t follow basic rules and failed to train and supervise Tharmathurai properly.

Last summer, the district court in Frankenthal rejected the appeal.

In upholding the lower courts’ ruling, the Zweibruecken court found that the supervisors did not perform adequate checks of the rides and of the park attendants operating the rides. But the court said it could not prove that Amber’s death would have been prevented if the managers had better supervised the operator of the ride, according to a court news release summarizing the verdict.

Witnesses testified that the operator did not always follow basic procedures, leading the court to reason that even if the manager and supervisor had told Tharmathurai to announce the start of the ride with a microphone, there was no guarantee he would have done so, the release said.

Claudia Walker said this week from her home in Keltersbach that she disagreed with the high court’s ruling.

“If you have an employee that is responsible for the lives of people and he doesn’t follow instructions, it’s the supervisors’ job to fire him,” she said. If the supervisor “and the operations manager did their job, Amber would still be alive because the start of the ride would have been announced.”