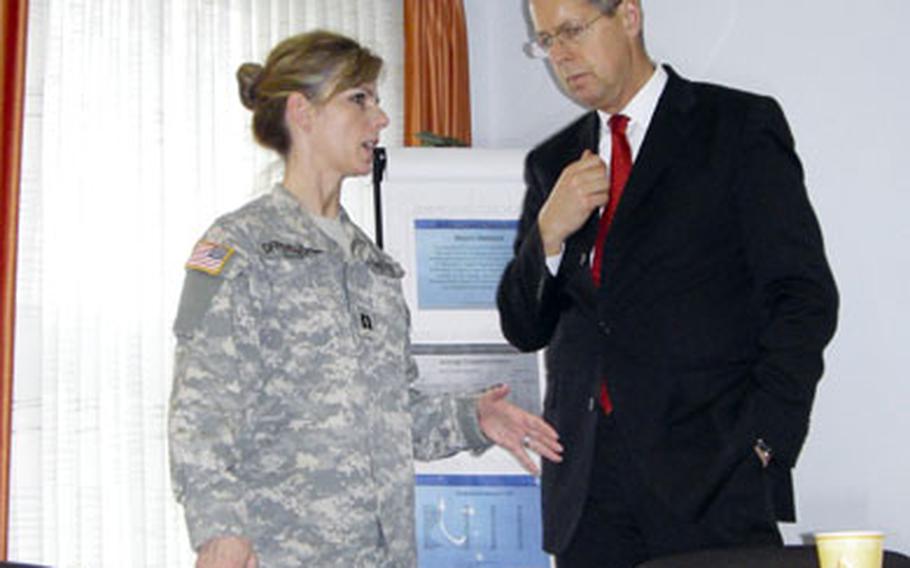 Reinhold Robbe, ombudsman of the German Parliament for the German army, right, talks with Capt. Monica Offenbacher-Looney, commander of the Medical Transient Detachment, during a recent visit to Landstuhl Regional Medical Center. Robbe was touring the hospital to see how U.S. doctors handle post-traumatic stress cases. The German military has seen a significant rise in PTSD cases in recent years. (Marcus Klöckner/S&S)

The number of German army soldiers being treated for post-traumatic stress disorder has tripled in the past two years, echoing a rise in such cases among the ranks of U.S. soldiers.

There are about 3,400 German army troops in Afghanistan, where most German PTSD cases originate, the Deutsche Welle news service reported on its Web site. About 62,000 Germans have been stationed in war zones in the past three years, but the German army, in general, has not gone through as many combat situations as the U.S. military. That is one of the reasons why there is such an increase of PTSD cases in the German army.

In light of the increase in cases among German soldiers, Reinhold Robbe &#8212; the ombudsman of the German parliament for the German army &#8212; toured Landstuhl Regional Medical Center to see how U.S. doctors are dealing with the disorder.

Robbe said he came away deeply impressed after his five-hour visit.

The U.S. military has more experience in treating soldiers with PTSD because America has been involved in several wars over the past decades, he said.

"The U.S. government provides financial aid to the soldiers the German army can only dream of," Robbe said. "But, we also have to consider that the U.S. society does have a different relation to the military and the soldiers than we in Germany because of our World War II history."

Robbe also has a personal connection to the disorder, he said.

His father suffered from PTSD when he returned home from World War II. He died because of the problems the disorder caused, he said.

"I have to confess that there are certainly emotions involved, and this is one of the reasons why I want to help the soldiers who are confronted with PTSD."

Because of this lack of experience with the disorder, the German government has been slow to respond with funding for treatment, said Dr. Peter Zimmermann, a specialist in treating PTSD who works at a German military hospital in Berlin.

He noted that methods of treatment in Germany are similar to those used by U.S. doctors.

"We also offer, for example, group therapy and talk to the soldiers individually," Zimmermann said. "The only difference I see is that we indeed do have much smaller funds than the Americans."

He believes the lack of funding is based on the fact that the German army and the government first had to learn about the seriousness of PTSD, he said.

"We are in the middle of a development process regarding PTSD," he said.

And even though the U.S. seems to provide decent help to its soldiers, Zimmermann did say that a couple of Americans have contacted him seeking PTSD treatment.

"One of them was a wife of a Special Forces soldier," he said. " ... (she) asked for help and said that her husband behaves strangely and that she thinks it is PTSD."

Zimmermann also is closely connected with the German Web site www.angriff-auf-die-seele.de (attack on the soul), which was created by Frank Eggen, a German army senior noncommissioned officer who wanted to develop a one-stop resource for PTSD.

Although the site is not an official German military site, it does offer a "write an e-mail" option that will be forwarded to a doctor if someone needs help. Eggen said that German Defense Minister Franz Josef Jung mentioned the Web site during a German parliament speech on PTSD, thinking it was an official army Web site.

Andreas Eckert, 44, a German captain who suffers from the disorder, said it doesn&#8217;t matter which country&#8217;s doctors help soldiers with PTSD, just that the help is provided.

A rumor had spread through the streets of Prizren that the Serbs were chasing two children through a creek, and one of the children had died.

While the rumor had turned out to be false, the incident led to a violent uprising in the town.

"I can remember exactly," Eckert said. "The air was filled with smoke of burning houses."

It was Eckert&#8217;s job to coordinate the helicopters to evacuate civilians caught up in the violence.

"I worked a 60-hour shift, and at the end, I was burned out completely," he said in a telephone interview. "I went to a M.A.S.H. unit to visit an Italian soldier who got hurt.

"I saw all these wounded policemen, soldiers, civilians, young children, women and men," he said. "Then I saw this old woman, I think she was 90 or so. Her face was covered with blood and you saw someone must have beaten her brutally. Our eyes met and there was this look in her eyes asking me: &#8216;Why have you not done anything (to help me)?&#8217; "

It took about a month for the effect of that day to hit him, Eckert said.

"I had loss of hearing within a very short period of time," he said. "The doctor asked me if I had gone through a trauma, and I told him about it. He sent me to psychiatry and PTSD was diagnosed."

That was in early 2005. That incident changed his life, he said. He suffered panic attacks and had trouble sleeping. Basically, his life was turned upside down, he said.

In addition to fighting the problems associated with the disorder, he also was faced with the fact that some people close to him didn&#8217;t understand what he was going through, he said.

"My wife supported me greatly. She informed herself about PTSD," Eckert said. "But my father, also a former soldier, thought I was pushing it too far.

Today, more than three years later, Eckert said he feels a lot better. Nevertheless, the battle is still not won.

"I am still not able to work under pressure as I once could," he said. "I cannot work anymore in the job that I loved so much."