Georgian orphans get a little help from American soldier Refugees from South Ossetia line up to register at a displaced persons center set up in a school in Tbilisi, Georgia. (Michael Abrams/S&S)

Refugees from South Ossetia line up to register at a displaced persons center set up in a school in Tbilisi, Georgia. (Michael Abrams/S&S) 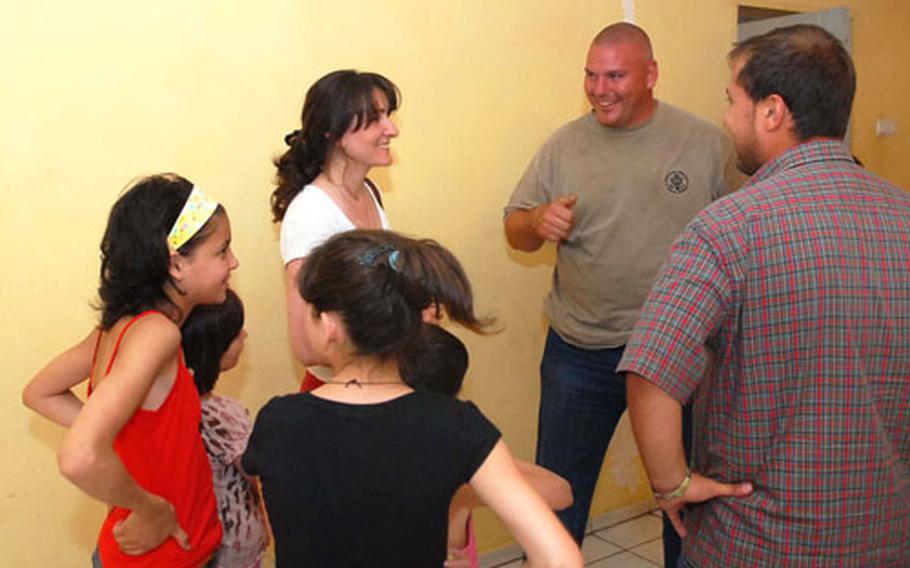 With the help of translator Vakhtang Saladze, Jarrod Gozy, second from right, a sergeant first class based in Hohenfels, Germany, talks to Layla Meribishle, the director of a Tbilisi, Georgia, orphanage. (Michael Abrams/S&S)

TBILISI, Georgia &#8212; At Orphanage #1 for Lost and Displaced Children, the youngsters rushed up to the familiar faces.

One young girl, smiling at the visitors, wanted to know: "Where are the soldiers?"

Whether she was inquiring about the other familiar faces or alluding to the lack of U.S. involvement in the fighting wasn&#8217;t exactly clear.

Then a young boy chimed in: "I want to go South Ossetia and fight," he said.

"Tell him to enjoy being a kid," responded Sgt. 1st Class Jarrod Gozy through his translator.

At the Tbilisi orphanage, Gozy wasn&#8217;t on official Army business during the Sunday night visit. Instead, the Hohenfels, Germany-based soldier was there as a volunteer to check up on how the children were doing since he last saw them a few days before the trouble started.

As the founder of the nonprofit group Give Children a Chance, Gozy had adopted the orphanage as a special project. And on training missions to Georgia, he and other soldiers from the Joint Multinational Training Center spent much of their free time pitching in to help out.

The concern for now is how the facility will be affected by the ongoing humanitarian crisis in Georgia, where thousands of people have been displaced in the aftermath of the country&#8217;s conflict with Russia.

What Gozy found out on his recent visit is that supplies are needed.

"I have to turn people away because we don&#8217;t have the resources right now," said Layla Meribishle, the orphanage director.

The orphanage supports between 80 and 100 children, but she doesn&#8217;t have the funds to support more.

And next door to the orphanage, 450 people uprooted from Gori and South Ossetia are quickly filling up an old schoolhouse. The crowd of new arrivals was pressed against an office door, waiting their turn to register for help.

About 10 of the children at the schoolhouse are without families, according to the director there. The orphanage could be a good place for them.

Gozy, who helps coordinate U.S. military aid arriving at the Tbilisi air base, has plenty of contacts with the local relief groups that deliver supplies.

He gives the school and orphanage director some advice on who to contact and how best to go about getting assistance.

"The biggest problem is we have no beds," the school director told Gozy.

That was evident in the classrooms at the school, which serve as makeshift bedrooms with desks pushed together into beds.

"We have no blankets," said Elia Kasishveli, who led his family out of South Ossetia as soon as the fighting started. "My hope is to go back home soon. These are two countries fighting and we are just caught in the middle."

For Gozy, a native of Chillicothe, Ohio, the idea of helping out children began in 1994.

"It started when I was deployed to Haiti, handing out candy," he said.

After that, he taught English to school children in Bosnia. He built an orphanage in Romania in 2002. And during a deployment in Afghanistan, his foundation donated $40,000 worth of school supplies to 20 schools, Gozy said.

"I have to walk a fine line," he said, noting that he has to keep the jobs separate and can&#8217;t represent himself as a soldier on volunteer missions.

At the orphanage in Tbilisi, Gozy&#8217;s group has provided new playground equipment, a new refrigerator and an industrial-sized clothes dryer. "In December, they were hanging their wet clothes outside dry," he said.

A week before the fighting, Gozy also arranged to have a group of 20 Marines, airmen, sailors and soldiers help clean and renovate classrooms. Whether the military men, who were taking part in a joint training mission in Tbilisi, will be back as volunteers is uncertain.

The training partnership between the U.S. and Georgia involves preparing Georgian army units for deployments to Iraq. With the country embroiled in the tense standoff with Russia, it&#8217;s unclear what level of support the small Georgian force can provide in Iraq.

But if the training partnership ended and the U.S. military presence went away, Gozy said he would keep support for the orphanage coming from afar.