Georgian medics get dose of training Georgia army Cpl. Raudi Davitadze, 22, performs CPR training on a mannequin Monday. Davitadze and other future platoon medics are in the middle of a three-week course being taught by U.S. European Command forces. (Geoff Ziezulewicz / S&S)

Georgia army Cpl. Raudi Davitadze, 22, performs CPR training on a mannequin Monday. Davitadze and other future platoon medics are in the middle of a three-week course being taught by U.S. European Command forces. (Geoff Ziezulewicz / S&S) 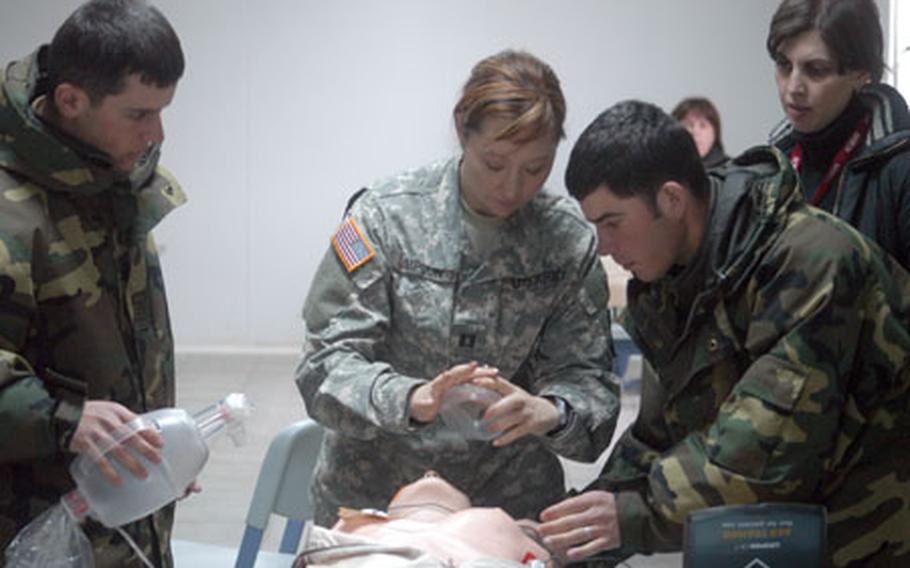 Army Capt. Regina Simpson shows Georgian soldiers the finer points of CPR Monday during a class for future platoon medics. A contingent of soldiers, sailors and airmen have been in the former Soviet state of Georgia since last summer, training a brigade for an Iraq deployment. (Geoff Ziezulewicz / S&S) 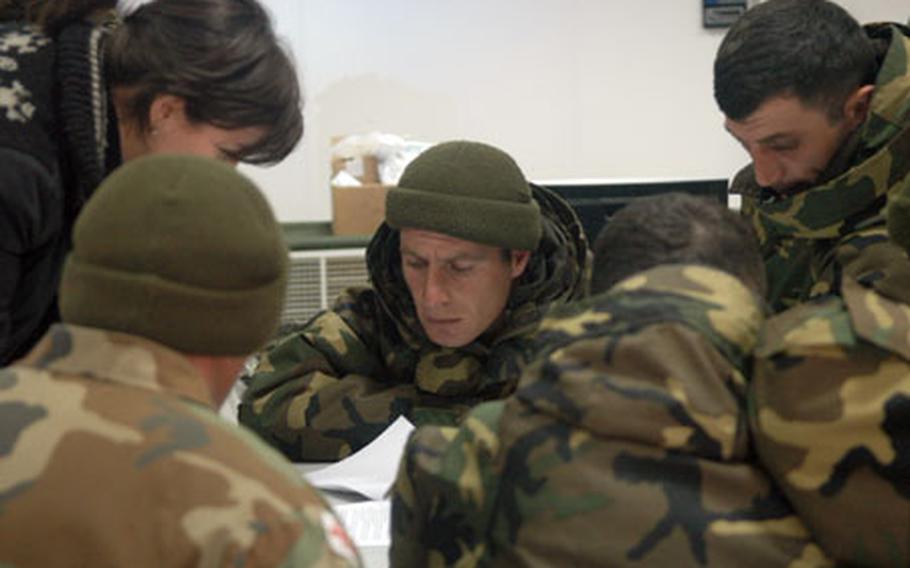 Future platoon medics with the Georgian army are in the middle of a three-week program to make them the go-to guys should someone need medical attention during their deployment to Iraq. The classes have not been easy, and the language barrier and pace have caused some hiccups. Some soldiers were bummed Monday afternoon, after seven of 11 soldiers failed their CPR exam. But things turned around Tuesday, and all but two soldiers passed. (Geoff Ziezulewicz / S&S)

KRTSANISI TRAINING AREA, Georgia -- Despite a significant language barrier, soldiers from the Germany-based 212th Combat Action Support Hospital are here teaching the future platoon medics from the Georgian army what they may need to save a life in Iraq.

But there were inevitable hiccups, such as when translator Tinatin Bochorishvili got confused over Army Staff Sgt. Devon Lawrence&#8217;s use of &#8220;when hell freezes over.&#8221; While Lawrence worked to intertwine Georgian words such as bicho for &#8220;boy&#8221; in his lessons, semantics are just one of the challenges the American medical detachment faces here.

The U.S. medics are part of an approximately 65-person U.S. European Command force that has been in this Caucasian nation since the summer preparing a Georgian brigade for deployment to Iraq. Known as the Georgia Sustainment and Stability Operations Program II, the effort is basically an American indoctrination on infantry tactics for three battalions of Georgia&#8217;s 3rd Brigade. It continues previous American training initiatives for the Georgian army and is slated to wrap up later this year.

Each Georgian battalion gets 12 weeks&#8217; training on everything from urban operations to mortar use. And while every soldier gets some medical training, the future medics assembled in a classroom this week are getting prepped to be the go-to guys if something bad should happen in Iraq, said Army Capt. Regina Simpson of the 212th CASH.

After practicing CPR techniques on a mannequin, 22-year-old Cpl. Jimsheri Badzagua said the class helps him augment his general skills and better prepare him for Iraq. &#8220;It is very helpful,&#8221; he said through a translator.

Simpson said Monday morning that she felt confident about how things were progressing, despite the inevitable challenges.

Later that day, results came back for the 11 attendees who had taken a test on the CPR techniques they had learned.

Remedial classes will have to be scheduled around their other training obligations, and might take place at night later in the week, she said.

&#8220;Maybe they&#8217;ll take it more seriously,&#8221; Simpson said, adding that some of the scores may have resulted from the soldiers not taking time to read the questions thoroughly.

The attitude among some of the Georgians was that the Americans should just let them pass.

On Tuesday evening, Simpson said that all but two of the soldiers had passed the test on the second try.

One soldier initially refused to take part in a class Monday afternoon on how to run an IV. They won&#8217;t have the chance to shrug it all off should the unthinkable occur while they&#8217;re deployed, Simpson said.