Georgia’s steps toward future hampered by past 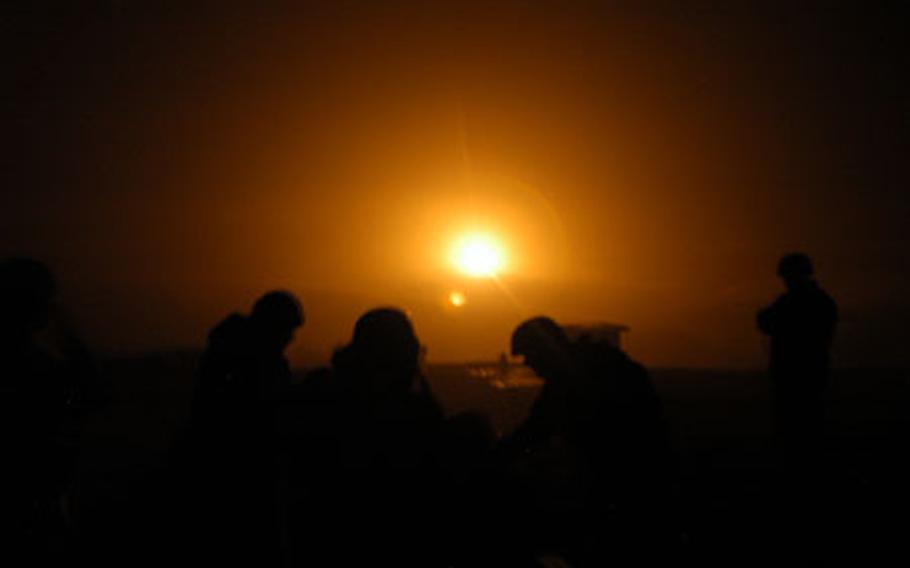 The U.S. training of the Georgian army, most recently manifested in the Georgia Sustainment and Stability Operations Program II, is part of a larger effort to solidify relations between the West and the former Soviet state. Training like this recent illumination mortar firing during night maneuver exercises in Georgia is part of an effort to bring the Georgian military up to NATO standards. A contingent of about 65 U.S. soldiers, sailors and airmen, mostly from the Germany based Joint Multinational Readiness Center, are slated to wrap up training of a Georgian brigade next month. (Geoff Ziezulewicz / S&S)

The U.S. training of the Georgian army, most recently manifested in the Georgia Sustainment and Stability Operations Program II, is part of a larger effort to solidify relations between the West and the former Soviet state. Training like this recent illumination mortar firing during night maneuver exercises in Georgia is part of an effort to bring the Georgian military up to NATO standards. A contingent of about 65 U.S. soldiers, sailors and airmen, mostly from the Germany based Joint Multinational Readiness Center, are slated to wrap up training of a Georgian brigade next month. (Geoff Ziezulewicz / S&S) 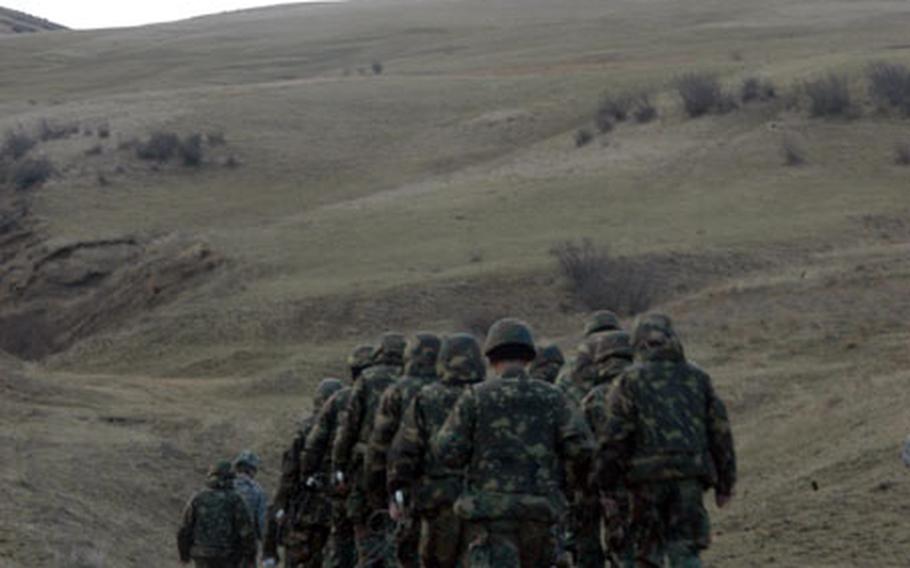 As it works to enter the Western world and NATO, the Georgian military and government in general face an uncertain future, as Russia has been loathe to give up its influence in the region. (Geoff Ziezulewicz / S&S) 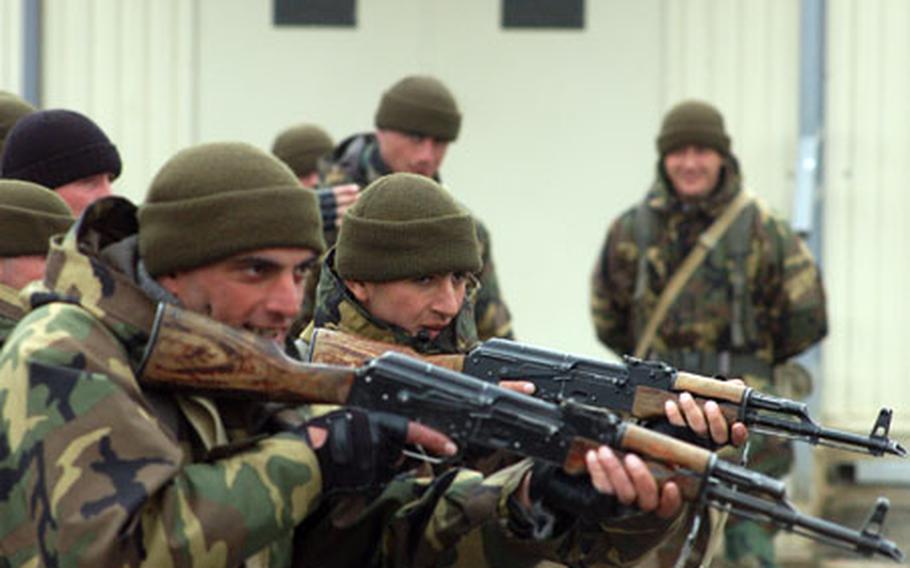 Three Georgian army battalions from the 3rd brigade have been going through 12-week training cycles that are run by a U.S. contingent of about 65 soldiers, sailors and airmen. Americans on the ground are teaching the Georgian soldiers everything from urban operations to mortar fire. With strides toward the future being hampered by ties to the past, Georgia has become a new geopolitical grappling point for influence between Russia and the U.S. (Geoff Ziezulewicz / S&S)

The man, only in his 20s, still remembers what it was like when his native Georgia was whole.

Now working as an interpreter for a U.S. military training mission in this small, former Soviet country in the Caucasus, his thoughts came hard and fast. The man hails from the Abkhazia region, revered in Georgia and Russia alike for its breathtaking Black Sea beaches and scenery.

&#8220;You can ask anyone, that was the most beautiful place in Georgia,&#8221; said the man, who asked not to be named because contractor KBR had warned employees not to talk to the media.

But in 1993, following the fall of the Soviet Union and the subsequent chaos that engulfed many of the newly independent states, Abkhazia and the South Ossetia region of Georgia seceded in the midst of civil war. Along with hundreds of thousands of other Georgians, the interpreter and his family fled to the capital of Tblisi.

Like many other Soviet satellite states, Georgia&#8217;s growing pains continue to this day. Since a peaceful 2003 revolution displaced a cadre of corrupt and discredited leaders, this country of about 5 million has made strides in aligning itself with the West and a hoped-for NATO membership.

The latest manifestation of that burgeoning partnership, the Georgia Sustainment and Stability Operations Program II &#8212; a contingent of about 65 American soldiers, sailors and airmen &#8212; is wrapping up a round of training next month to get Georgian forces up to NATO standards.

But even as the government tries to make friends in the West, Russia still sits to the north, and has exerted control over those breakaway regions, essentially rendering them part of Russia. The regions comprise about 17 percent of Georgia&#8217;s land mass.

With strides toward the future being hampered by ties to the past, Georgia has become a new geopolitical grappling point for influence between Russia and the U.S.

An embattled historyAs the Soviet Union started to crack in the late 1980s, Georgians began to call for independence, Suny said. But demonstrations were swiftly and brutally put down by the Soviet army.

After the USSR collapsed, the Georgians began fighting amongst themselves, and Abkhazia and South Ossetia more or less seceded from Georgia proper. A cease-fire in 1994 ended the fighting, and Russians moved into the disputed territories under the auspices of a peacekeeping mission.

The U.S. has as much to gain by building good relations with the growing democracy as Georgia does with the West, according to Charles King, a Georgetown University professor who studies former Soviet states.

&#8220;Georgia is a state that has shown itself willing to play the democratic game,&#8221; King wrote in an e-mail. &#8220;In addition, Georgia is a firmly pro-NATO state in the middle of several countries which waver a bit on this issue, which means Georgia represents a kind of outpost in an otherwise pro-Russian and waveringly pro-Western part of the world.&#8221;

Georgians feel that participating in Iraq and in the Balkans is a way to further join the community of democratic nations, the interpreter said. This, along with NATO membership, will hopefully shake the yoke of Russian influence.

Russia has responded by granting passports, currency and welfare benefits to Georgians in the breakaway republics, basically treating them as Russians without formally declaring so, Suny said.

&#8220;They&#8217;ve been muscling Georgia and pushing them around pretty good lately,&#8221; Suny said of Russia&#8217;s subtle methods of controlling Georgia, a country whose economy relies extensively on U.S. aid. &#8220;They closed the borders and sent back Georgians from Moscow. They&#8217;ve cut off wine imports and have a lot of economic power, and they control part of the supply of energy to Georgia.&#8221;

The Georgian leadership may see NATO membership and a U.S. friendship as the main cure-all to their problems with Russia, Suny said, but the U.S. isn&#8217;t about to go to war with Russia over Georgia.

And while the West has supported Georgian NATO membership, those same leaders also do not want to antagonize Russian president Vladimir Putin, he said.

So while the Georgian army gets to enhance its international stature by going to Iraq, those soldiers and commanders also get vital experience, said Keith Darden, a professor at Yale who studies the region.

A peaceful resolution?While Georgian leaders have said that they wish to join NATO in the coming years, it might not be that simple. NATO officials didn&#8217;t return requests for comment, but Darden said a prerequisite of NATO membership is secure and sovereign borders, something Georgia does not currently have.

Georgia might have to give a little to move forward as well, Suny said.

One thing is clear: both the U.S. and Russia will continue to vie for influence in the area, which is also a land bridge between Iran and the former superpower.

Georgia will continue to grow within the very real geographical and political confines it finds itself in, as tensions simmer on the Georgian and Russian sides.

&#8220;If [Georgia] chooses a more moderate approach toward Russia, there are lots of areas of possible agreement,&#8221; Suny said. &#8220;Right now there are very hard feelings on both sides. Lots of Russians don&#8217;t like Georgians, and vice versa. It&#8217;s hard to think rationally about a more moderate, negotiated position.&#8221;

Size:Slightly smaller than South Carolina, about 17 percent of country is not under government control.