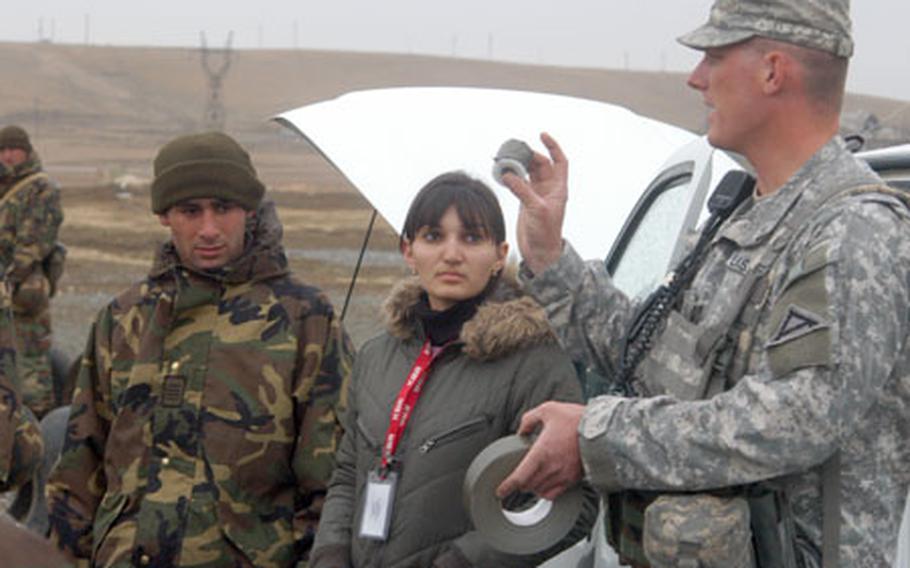 For interpreters like Keti Maghalashvili, center, working as an translator between American instructors and Georgian army soldiers means long hours, sometimes-nasty weather, and double what many professional jobs pay in the nearby capital of Tblisi. On a recent day, she helped Army Sgt. Scott Bell explain what to look for when searching a vehicle for bombs at checkpoints. (Geoff Ziezulewicz / S&S)

For interpreters like Keti Maghalashvili, center, working as an translator between American instructors and Georgian army soldiers means long hours, sometimes-nasty weather, and double what many professional jobs pay in the nearby capital of Tblisi. On a recent day, she helped Army Sgt. Scott Bell explain what to look for when searching a vehicle for bombs at checkpoints. (Geoff Ziezulewicz / S&S)

Some Georgian interpreters, like this one with the megaphone helping American instructors with marksmanship, have heard the trainers&#39; lessons so much in the past year that they say they can instruct the Georgian soldiers before the Americans are finished speaking. (Geoff Ziezulewicz / S&S) 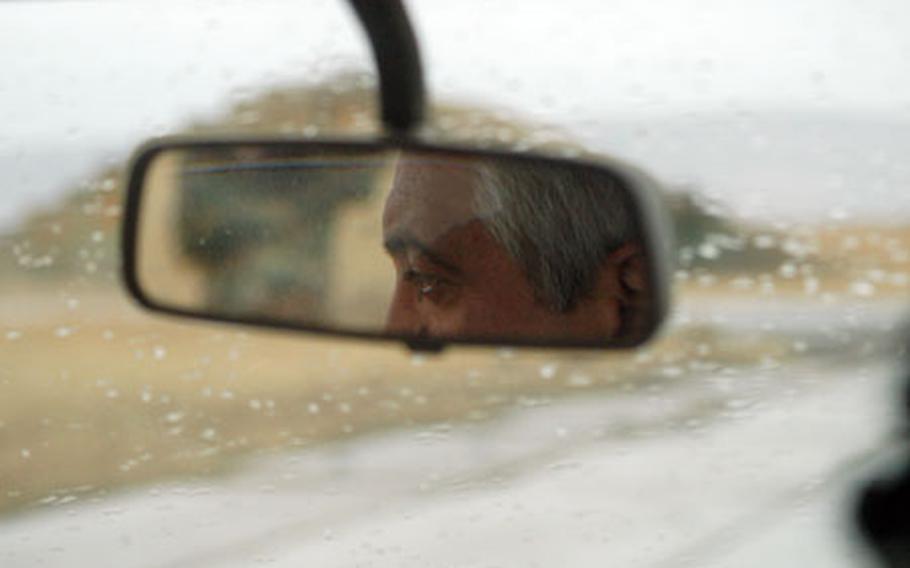 The approximately 260 local Georgians employed by KBR for the duration of the American mission spend much time just waiting around. Georgians are contracted to drive U.S. forces to training sites, and will sit around in their KBR-issued trucks for hours on end as training commences. (Geoff Ziezulewicz / S&S)

KRTSANISI TRAINING AREA, Georgia &#8212; The money is good, but the interpreter isn&#8217;t crazy about his job translating U.S. military instructions to a Georgian army battalion.

There&#8217;s the inevitable standing around, and the waiting for training to begin on sunny, windswept days or wet, muddy nights.

One interpreter, who said he learned English by first listening to the Beatles, said his English skills have suffered because he&#8217;s using very limited, repetitive vocabulary, full of military parlance.

&#8220;Nobody likes standing in the rain all day,&#8221; said another interpreter, who along with his colleagues said he was told by officials with contracting giant KBR not to speak with the media and therefore declined to be named.

From Iraq to Afghanistan and at this tiny former Soviet republic in the Caucasus region just north of eastern Turkey, interpreters are a necessity for the U.S. military.

The more than 60 contracted interpreters have become a crucial link in making sure local soldiers comprehend just what the Americans are trying to teach them.

The U.S. soldiers, sailors and airmen have been here since last summer as part of Georgia Sustainment and Stability Operations Program II. The initiative is slated to end next month.

So as the soldiers go, so go the interpreters. From the mortar range in the middle of the night to the faux checkpoint exercises and marksmanship training, interpreters convey the day&#8217;s lessons. Some said they have become so familiar over the year with what American instructors are saying that they are able to convey the Georgian gist before the American is done explaining it in English.

Many of the interpreters &#8212; who are available 24 hours a day &#8212; hold advanced degrees and are trained lawyers, doctors and other professionals. While highly paid and regarded in the West, they have a hard time making ends meet in this still-developing country, which has a gross domestic product per capita of about $3,400 per year, according to the U.S. State Department.

One interpreter, who has a law degree, said KBR pays them about twice what they&#8217;d make on the economy. While a professional salary might draw the dollar equivalent of $200 to $300 a month in the Georgian lari currency, KBR pays about $600 a month, or about $4.25 an hour.

Ministry jobs with the young, pro-West Georgian government can pay $600 to $800 a month, one interpreter said.

In all, the Georgia program has employed about 260 local Georgians to do everything from manning the mess hall to driving and guarding the gate to the American camp, Jones said.

The money is so good that at least one interpreter is said to be planning to go to Afghanistan for another other job with KBR once the U.S. forces leave Georgia.

While KBR interpreters and other employees at the American camp here said they were instructed not to talk to the media, KBR spokeswoman Melissa Norcross said in an e-mail that that is not the case.

&#8220;No KBR employees are prohibited from speaking with the media,&#8221; she said. &#8220;We simply ask that they keep us informed of any requests so we can ensure that our employees&#8217; safety and operational security are protected.&#8221;

Aside from the decent wage, the jobs are neither easy nor desirable, one interpreter said. &#8220;KBR does everything they can do, and they ask everything from us.&#8221;