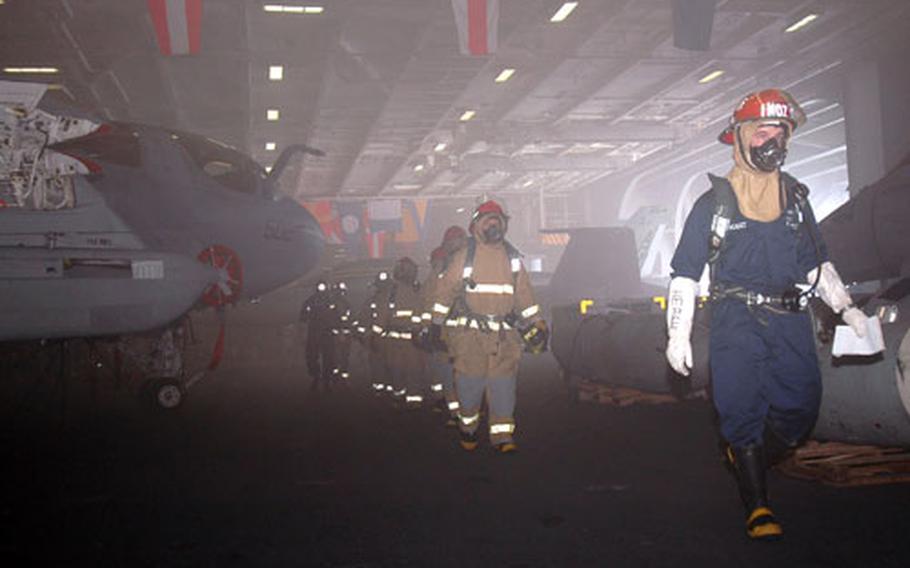 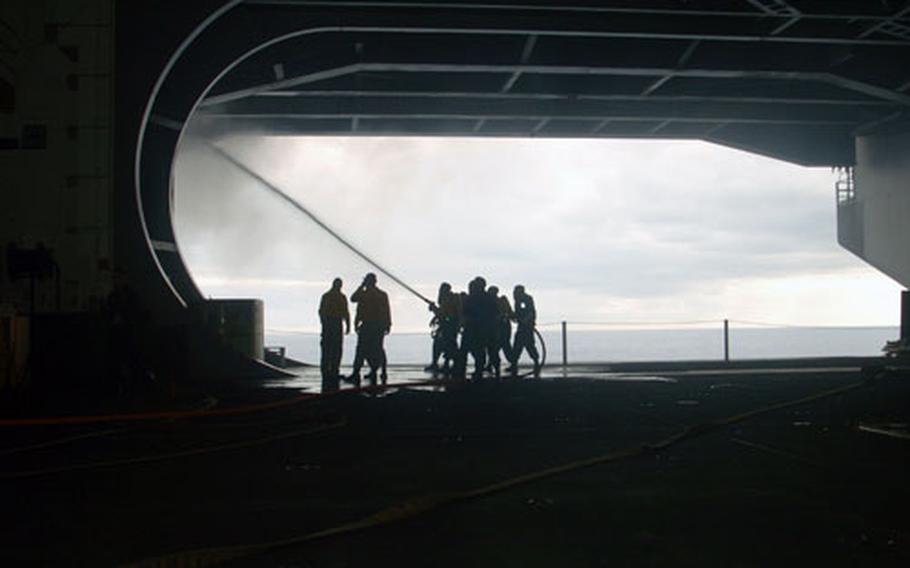 Sailors work to put out a fire from Hangar Bay 3. The cause of the fire and the extent of the damage are currently under investigation as the ship continues on course for San Diego. (Courtesy Christopher Delano / U.S. Navy)

YOKOSUKA NAVAL BASE, Japan &#8212; The USS Kitty Hawk will have to remain in the Pacific longer than initially planned after its replacement, the USS George Washington, was damaged by a recent fire, a Navy official said.

The two carriers were to meet in Pearl Harbor next week for a "hull swap," with the newer George Washington taking over for the 47-year-old Kitty Hawk, the oldest active-duty warship in the fleet. About 900 Kitty Hawk sailors and the carrier&#8217;s air wing were expected to transfer to the George Washington.

But a fire broke out on the George Washington on May 22, while the carrier was off South America, prompting the Navy to postpone the ship&#8217;s trip to Hawaii, said Pentagon spokesman Cmdr. Jeff Davis.

The George Washington is in San Diego for damage assessment and repairs. The fire lasted several hours, causing minor injuries to about 24 sailors and extreme heat in parts of the ship, according to Navy reports.

Decisions &#8212; like rescheduling the turnover with Kitty Hawk and whether the George Washington will be able to participate in the annual Rim of the Pacific exercise &#8212; will be based on a final damage assessment expected in about a week, said Commander U.S. Pacific Fleet spokesman Capt. Scott Gureck.

"Everything hinges on the assessment," Gureck said. "In the most hopeful scenario, the GW will be on her way in short order. But if she has to stay in San Diego, the schedule will change."

In the meantime, instead of making its way stateside for eventual decommissioning, Kitty Hawk will "continue to conduct routine operations in the Pacific," Gureck said.

"She&#8217;s a full asset all the way until the day she decommissions," Gureck said of the ship, which left Yokosuka amid fanfare Wednesday after a decade in Japan.

Kitty Hawk&#8217;s homeport officially changes July 15 from Yokosuka to Bremerton, Wash., where the carrier is to be decommissioned in early 2009. But right now, the "ship is fully capable and ready for tasking," Gureck said.

The delay has Navy personnel specialists looking at the situation "very closely," as some of Kitty Hawk&#8217;s crewmembers have "critical report dates" for their next duty stations, Gureck said. Other sailors&#8217; transfers might be "delayed," but it&#8217;s too soon to tell if orders will be affected, he said.